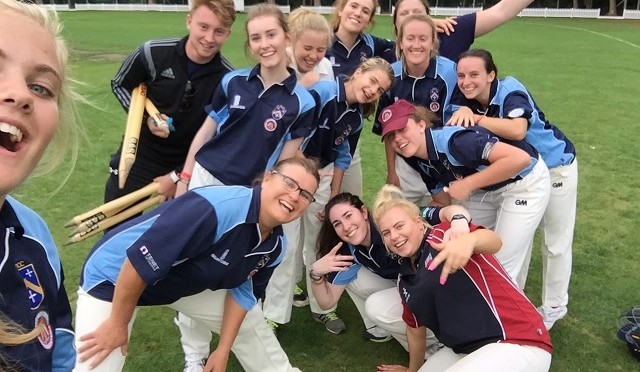 Click here for the original joint communication from Stoke and East Molesey : SDCC and EMCC Ladies

Training
Details of Winter Nets will appear here when booked.

A Brief History
The Stoke D’Abernon CC Ladies section first entered League cricket in 2008 with devastating results. Under the guidance of Chris Hardy, Andy Page and numerous volunteers; the side entered Division 4 of the Women’s Cricket Southern League and were promoted to Division 3. (http://womenscsl.play-cricket.com/leaguetables/divisionTable.asp?id=10052077&seasonID=9)

Sadly the girls became a victim of their own success. A number, including Stoke captain Amy Page, (pictured below with some of her team-mates), who was the first captain of the Stoke Molesey Ladies CC, were continually selected for the Surrey Women’s 1st XI, and whilst the higher leagues were able to arrange bye-weeks in their fixture cards, lower down the ladder no exceptions could be given and Stoke were unable to play their best side in Division 3, and in some case had to concede matches due to lack of numbers.

When all the girls were available, they continued to win silverware, thrashing Reigate Priory in the 2009 Surrey Women’s Trust League competition. Sadly they were denied the opportunity to defend their title the following season when the playing conditions were altered so that county players were not allowed to take part!

Following recommendations from Surrey CCC for their county players to play in the highest leagues, a number of players were given little option but to leave Stoke, and we had to withdraw from the Women’s Cricket Southern League. A very young side was reformed in partnership with East Molesey who were suffering similar problems, and the new Stoke Molesey Ladies CC won their inaugural Surrey Trust League match against Oxted & Limpsfield.

Just one transitional year was needed. Trust League participation has continued and we have won the competition four times in the short period of existence as a merged club.

We welcome all new players of all abilities – a number of the all-conquering Stoke side had never played cricket before joining. Why not give it a try? 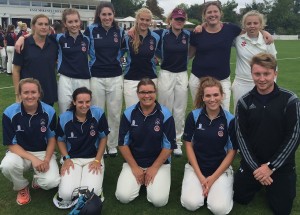 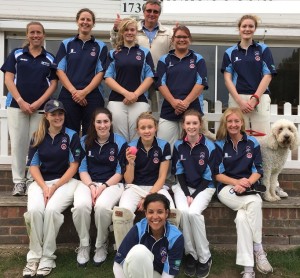 PARTNERSHIP RECORDS
As the Stoke Molesey Ladies have played T20 and reduced overs matches only since merger, and partnerships are often broken/extended by players retiring, we will collate longer format partnership records from 2017 when the team moves into the Women’s Cricket Southern League.

The record partnerships for the Stoke D’Abernon Women’s 1st XI were as follows:

CENTURY PARTNERSHIPS
As the Stoke Molesey Ladies have played T20 and reduced overs matches only since merger, and partnerships are often broken by players retiring, there have been no century partnerships involving just two players. We will collate longer format partnerships from 2017 when the team moves into the Women’s Cricket Southern League.

The century partnerships, (in date order), for the Stoke D’Abernon Women’s 1st XI were as follows, (date/wicket/partnership/players and their individual scores in that match):

PLAYER RECORDS
Most Hundreds (Career)
The “Retire at 35” policy in the Trust League means that no centuries have been scored in the Stoke Molesey Ladies era. Amy Page has managed three half-centuries having retired at 35 and then returned to the crease at the fall of the last batter.

To get the full list of all-time leading wicket-takers, click here – http://sdacc.play-cricket.com/website/web_pages/88650 – then filter “Seasons : All” and “Team”

Hat-Tricks
No Stoke Molesey CC player, (or Stoke D’Abernon Women’s 1st XI player), has ever taken a hat-trick, but Nat Sciver took a hat-trick for the full England team on the 22nd October 2013 : http://www.stokecc.co.uk/news/?p=6190

Five Wicket Hauls
No Stoke Molesey CC player has ever taken a 5-for, (Hannah Osbourne has the best analyses, 3-1-4-4), but Bella Hardy, (twice including a best of 2.5-0-3-5), and Suzie Wood, (once), have taken wicket hauls for the Stoke D’Abernon Women’s 1st XI.

To get the full list click here – http://sdacc.play-cricket.com/website/web_pages/88651 – and Filter “Seasons : All” and “Team” then “Order By : Catches (Fielding Only)”

All Records Correct to the end of the 2016 Season