On what would have been the first League games of the season the Surrey Championship have issued this notice:

As we have now reached the milestone of what should have been the first day of the 2020 League campaign, we are sending a very different pre-season check-in. We truly hope that first and foremost this update finds you and yours all safe & well. Read more

Obviously don’t look at the 2020 fixtures grid for now…

The 2020 Surrey Championship fixtures have been released.

The 1st XI’s first ever match in Division 1 will be at home to Leatherhead; the 2nd XI start life back in Division 5 with the shortest of trips to Oxshott.

Drew has received the following letter from the Surrey Championship: 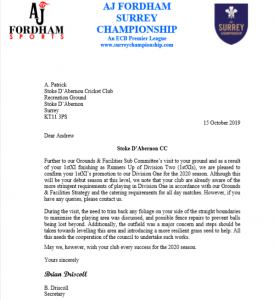 Drew adds : We’ve already re-seeded the entire outfield and I’m waiting to receive confirmation from the council that we can proceed with cutting back the overhanging branches and foliage. Read more

The 2019 Surrey Championship fixtures have been released.

The 1st XI start their first season in Division 2 with a trip to Worcester Park, leaving the 2s a home match against Old Hamptonians.

As we go up the divisions we visit more grounds for League matches for the first time; the 1s will play their first ever Saturday League games at Dulwich, Bank of England and Farnham.

The 2s will re-acquaint themselves with a number of familiar faces and grounds, but there will be matches at 2nd XI level against Addiscombe and Purley for the first time.

Stoke’s fixtures can be found on this site.

Full league fixtures for all divisions can be accessed via the Surrey Championship Play Cricket site : http://surreychampionship.play-cricket.com/website/web_pages/169718

Drew has received the following letter from the Surrey Championship: 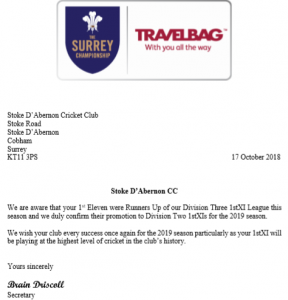 You may need to click on this image to enlarge it depending on what device you are reading this on.

There are still some spaces available on our tables. You know who to contact for details if you can make it. 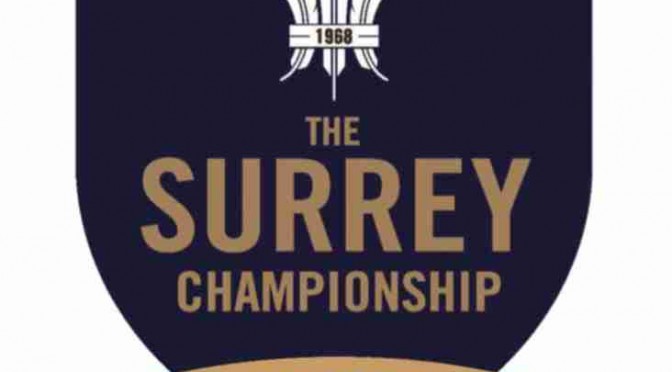 Pictures of our 1s & 2s appear along with reports on each XI’s season, points tables and leading averages/individual performances.

Players and umpires are also reminded to familiarise themselves with the updates to the laws. A short video is in this link: http://www.stokecc.co.uk/2018/03/12/new-laws-and-player-behaviour-explained/

A reminder of the upcoming Surrey Championship AGM on the 22nd January 2018, at Wimbledon Cricket Club. All clubs are expected to be represented. The proposed rule changes are in this link: http://www.stokecc.co.uk/2017/12/24/surrey-championship-agm-proposed-rule-changes-affecting-the-1s-and-2s/

One topic to be added to the agenda is that

the League are proposing to debate the introduction of the Duckworth-Lewis, (DL), system for rain-affected limited overs matches, throughout the entire league. Read more

The 2018 Surrey Championship fixtures were released this week.

The 1st XI start their first season in Division 3 with back to back home games against Addiscombe and Purley, leaving the 2s away games at Ashford and Trinity Midwhitgiftian after promotion to the same level.

As we go up the divisions we visit more grounds for the first time; the 1s will play their first ever Saturday League games at Cheam, Epsom, Old Ruts, Old Wimbledonians, Purley and Streatham & Marlborough.

The 2s will play league games against Egham, Sanderstead, (and Trinity), for the first time.

Stoke’s fixtures can be found on this site. Full league fixtures for all divisions can be accessed via the Surrey Championship Play Cricket site : https://surreychampionship.play-cricket.com/website/web_pages/169718

Our League Reps are still waiting your comments on the proposed changes to the Playing Conditions – see here : http://www.stokecc.co.uk/2017/12/24/surrey-championship-agm-proposed-rule-changes-affecting-the-1s-and-2s/

The Surrey Championship AGM is on the 22nd January 2018 and our League Reps need your input. Below are some proposed rule changes for the 2018 season that directly affect anyone who is going to plat League Cricket for Stoke in 2018…

Please send your comments to stokecc@hotmail.com and we will collate them and send them to our League Reps ahead of the meeting.