Stoke made 2018 Premier League champions Normandy fight all the way for the points after posting a total just below par on a used pitch. Read more 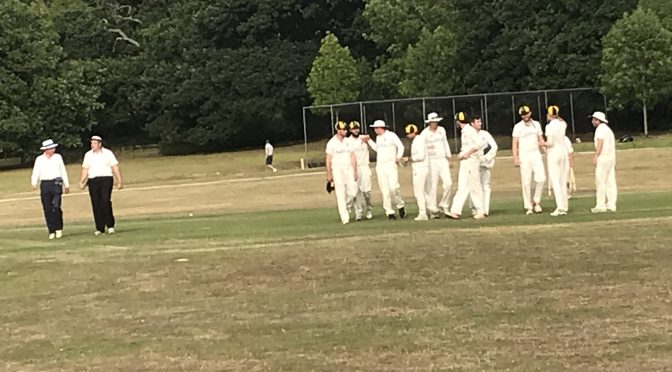 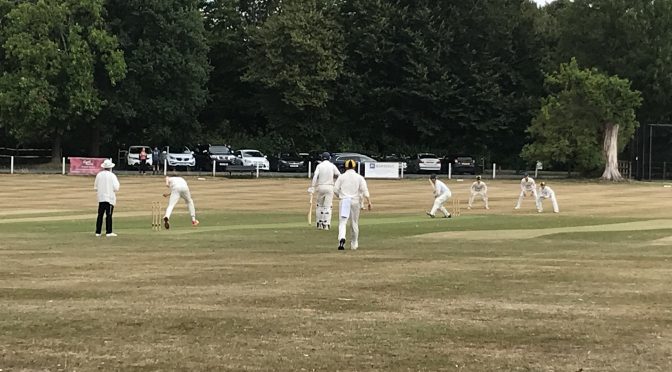 Fun in the sun as Jono’s old club, (pictured below), travelled down from Lancashire for their annual tour.

The visitors negotiated a bat first on losing the toss, and the erratic standard of the match was set early when Jay Stevenson dropped a simple chance at backward point, opening bat Browne ran on the shot and was eventually run out but an awful throw to Will Thomson behind the timbers.

Dan Douthwaite struggled to find his generally productive full length, but did get a wicket when Vincent punched to Nico Spreeth in the covers off the back foot. After losing a wicket to the dropped chance, Adrian Mills then took one he deserved when he ran a ball across left-hander Hawke and Thomson did the rest.

Ralph Coleman added a couple of wickets to his tally, castling Long, then Wiggans hit to John Vaughan-Davies on the circle. JV-D was one of three guest players in the Stoke XI.

However Unsworth had a guest player of their own in loan signing Stephen Anderson. Batting in his usual manner he hit a quick 40, and found a partner at the other end in Williams who cracked a very quick 50 and classy before retiring…although he was to return to the scene quickly as more wickets fell.

Vaughan-Davies did eventually bowl Anderson, and sent Earnshaw, (bowled for 14), and Casey, (caught by Fowler at slip for a duck), back to finish with the match’s best figures of 3 for 28.

Williams was bowled for 54 Spreeth when he came back, and the returning Mills collected Jono’s wicket, (he was permitted a hit at No.11), with the first ball of his comeback spell to finish with 2 for 13; Will Gudgeon doing the rest.

This was kamikaze batting at its finest, the shot selection interesting to say the least, although this was due to the players drawing an opening shot from a hat prior to going out.

In the reply Nick Lo crashed three early boundaries before being bowled by Williams. Will Thomson executed his Dil-Scoop first ball for four, followed it up with a cleanly his six, but heard the death rattle soon after, too.

Vaughan-Davies and Gudgeon kept the board moving with a stand of 41 in 3.5 overs. Gudgeon checked out on 26 from 16 balls faced with four fours and a six.

Stevenson, (2), walked past a delivery from Tour Manager Hetherington, then Tim Handel’s TFC was complete when executing his switch hit first ball, only to pick out backward point.

Douthwaite and Spreeth were up to the task, adding 52 runs in quick time as more of the tourists were given a chance to turn their arms over. Spreeth, (19), was another stumping victim with the total on 150. Fowler returned to the Stoke batting line up and was caught trying the reverse pull with two runs needed, leaving Coleman to nudge two singles in the 21st and 22nd overs to close out the win; the first time he has made the winning hit in his 475th match for the club.

So the cricket over; now time for more fun and games. The visitors continued to drink the bar dry, clearing us out of Asahi ahead of the boat race, (which was won by Stoke, Danny Snr!), prompting an early hearing of the Stoke victory song. The Stoke crew was bolstered by Jack Raimondo and the Frost brothers. Will Patrick also made an appearance in a spectator capacity.

Other Stoke players arrived for nets, having the bonus of being able to use the square following the early finish to the match, then tuck into the BBQ kindly run for us by Mike Carty.

The Unsworth lads left us with a cap as a souvenir of their visit, and headed off to Guildford to see what Surrey life had to offer.