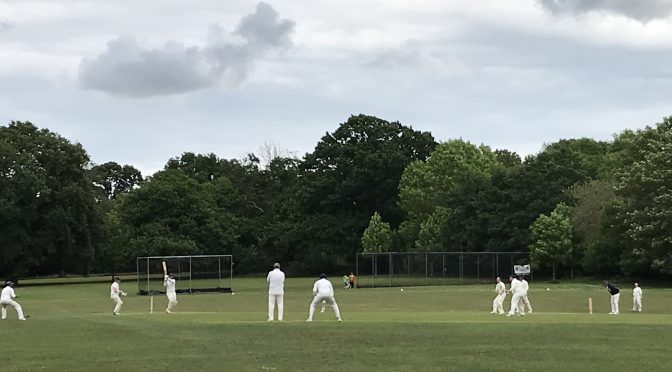 A third win in a row for the Sunday XI who put runs on the board for the third week running and then backed it up with a great bowling & fielding performance. Read more 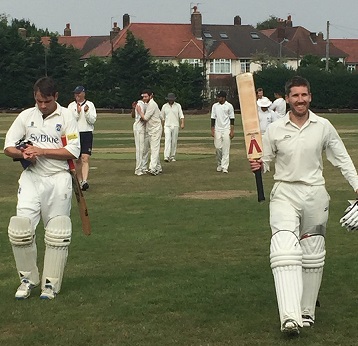 Stoke’s Sunday XI played out a draw against Thebertons, captained by currently occasional, but hopefully more full-time in the future, Stoker Neil Foster.

Foster won the toss and chose to bat on a very warm day. In contrast to the normal composition of the Stoke Sunday XI, Stoke were unusually short of bowling resources so Ralphie, (who himself became unable to bowl as his dreaded cellulitis re-appeared just after play commenced limiting him to a fill-in and-field role), negotiated a timed format with decent batting depth to attempt to chase any target set.

It was 100mph stuff in the opening overs as new-ball pairing Alistair McMillan and Atta-Ul-Karim Saeed, (“Atta” to his friends), traded runs for wickets at an alarming rate.

Atta struggled initially with his length, but McMillan took wickets at regular intervals as the Thebertons batsmen were looking to play as many shots as possible.

Foster gave him an early return catch to start things off, Bishop was bowled, Lucas suffered the same fate, (replacement bail needed), and Southern, who looked to hit as many boundaries as possible despite the field being set back, skied to Malcolm Dickson in the deep for 33.

McMillan’s fourth wicket was his 250th for the Club – he is also our all-time leading run-scorer and has taken more catches in the field that any other Stoker.

He completed his 5-for when Anderson was leg-before for 4; and it was 67 for 5 in just the seventeenth over. At one point 51 runs had come from the first seven overs; the scoring rate slowed by Andy Page who bowled a controlled spell of 9-3-22-0.

At one point A.G.Page was bowling in tandem with daughter Amy; and Amy won the ‘Page-off’  – she would later do so with the bat as well – with three wickets in her seven over spell. Fairweather was bowled, Dickson took a second good catch at deep long-off to account for Sutton who made 46 with five fours and two sixes; then Atta showed good hands at deep square-leg to give Amy figures of 5.2-0-37-3.

It was 142 for 8 in just the 29th over and Stoke showed their usual generosity in making sure the opposition had a total to bowl at rather than be shot out for, say, 160 in 35 overs.

Although Atta returned to bowl a much better second spell than his first, that included the the wicket of McConachie, (caught Andy Page), with the total on 168; No.9 Dundas, (who was at the Rec a couple of weeks ago playing for Old Pauline), took advantage of the quick outfield, and some friendly bowling, to put together an unbroken last wicket stand of 52. Dundas made 55 not out and had good support from No.11 Jenner who was unbeaten on 12.

Foster called the batsmen in after 41 overs. 220 was, perhaps, a few too many, but Stoke had the batting depth to chase it down.

However, after a great tea from Jo, Doug Glbertson and Malcolm Dickson found progress difficult against accurate bowling from Jenner and Dundas. In an attempt to get things moving Dickson flashed at one from Dundas and edged to Foster behind the stumps. Gilbertson followed soon after when an attempted pull went wrong and the ball ballooned up in the air where Foster fell underneath it at “45.”

Late call up Simon Fisher, (a former Stoke colt but playing his first senior game for the Club nearly a decade later), was scratchy at first but got his feet moving and hit a nice couple of shots before he was leg-before for 19 playing around a straight one.

Rod Thomson, batting with Dickson as a runner, and Deepak Malholtra got the board ticking as lesser bowlers were tried attempting to buy wickets with the asking rate already approaching tens.

It was one of those days when every big shot resulted in a wicket to scupper any chance of a successful chase. Malholtra, (11), was looking good but cut to backward point where the fielder reluctantly extended his arm and the ball stuck in his hand; Jeremy Connell was dropped twice, but then fell to great low catch; Thomson was bowled for the innings’ top score of 32 and Andy Page pulled a waist-high full-toss, (not called), to mid-wicket. 102 for 7.

Andy P was batting with Amy P; and the latter completed a good all-round display by safely negotiating the closing overs with men round the bat. She hit some very nice shots in her 15 not out. Here are father and daughter pictured batting together:

Most of the block–out was achieved with McMillan at the other end. McMillan was adjudged leg-before in the final over prompting a few nervous moments, but Atta saw off the rest of the over with no alarm and the teams shook hands with Stoke only getting to 128 for 8 in the same number of overs.

Next week Stoke are in Roehampton at the Bank of England Sports Club; but there is a Trust League match for your pleasure at the Rec against Worcester Park. 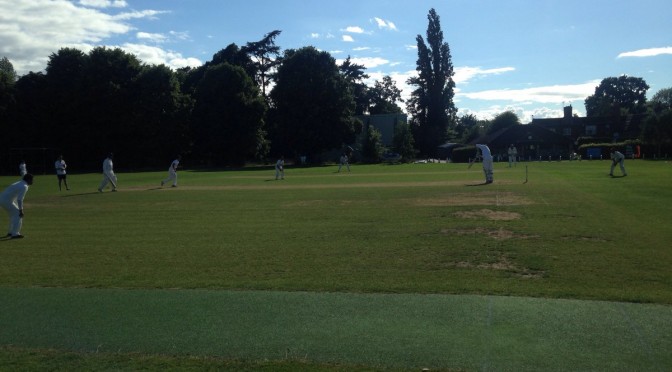 A lovely day at the Stoke Rec saw a great game where Stoke ultimately came up just short, but did so without compromising their Sunday cricket ethos to involve everyone who made themselves available to play.

Cheam chose to bat first on winning the toss; the match delayed slightly as the visiting captain was bringing the last couple from an age-group game he was managing. This gave Stoke a chance to catch up and have pre-game chat with an old friend, Hamza Hafeez, once of Old Rutlishians, who played against us in a number of our pre-season friendly and Trust League games. He was typically complementary about our youth set-up and asked after a few Trust League opponents from the past; notably Tim Handel, Alim Sheikh and Will Frost.

Anyway back to the present, Hafeez took strike with Sayed and they made steady progress on a pitch that offered little assistance to the bowlers. Richie Parrett, (7-1-27-0), bowled a decent opening spell, as did Luke Kirchner who settled into his work after a nervous start.

The opening stand reached 64 by the fifteenth over; and the partnership was broken by Rod Thomson who bowled Hafeez for 26. Ten runs later No.3 Forsdick edged a Thomson delivery to Peter Phipps who started behind the timbers and ended up keeping the role for the whole afternoon.

Sayed and Shetty moved the total past the hundred but the rate was kept in check by Thomson, and Ian Hopton who ironed out one or two things and added a more positive mindset to his bowling with a few fielders around the bat. The total reached 107 when Thomson took his figures to 7-1-9-3, Hopton making a casual one-handed grab at mid-off to remove Sayed for 45.

Cheam made steady progress after drinks without the rate ever spiralling out of control. Debutant Deepak Malholtra bowled five tidy overs of tempting flighted spin, and Zach Gilbertson bowled three overs without luck, difficult chances not going to hand.

Kirchner returned to complete his eight over allocation, (he bowled much better than final his figures suggested), leaving Ralph Coleman and Hopton to share the death overs.

Shetty completed his half century but Hopton castled him next ball; and Coleman picked up a couple of late ones when Fenwick, (28), skied on and Zach Gilbertson did well under the high ball; then Senanayake edged to Phipps.

202 for 6 at half-time represented a goof effort on both sides.

Doug Gilbertson and Chris Finch gave the chase a nice start with 38 runs in the first 8.3 overs; until the former was bowled for 24 looking to turn a straight ball from Forsdick through a vacant mid-wicket area.

Finch and No.3 Malcolm Dickson played positively to keep the scoreboard ticking. Finch hit some nice shots over the in-field and cut a couple for four through point too, but he was bowled by Senanayake for 37 with the score on 72 at the end of the 18th over.

Stoke then got a little stuck, largely due to a good spell by young spinner Nair. Malholtra hit a couple of nice fours before becoming one of many Stokers to fail to clear the in-field. Dickson, (30), hit the erratic sixth bowler West-Symes to Bahl and Phipps top-edged a sweep to “45”off Nair. 91 for 4 in the 23rd. Work to do.

Hopton got himself in and started to accelerate the scoring, but had an inexperienced lower order to work with. Kirchner and Zach Gilbertson did well, though, scoring 10 and 18 respectively before the former was bowled by West-Symes.

Hopton had engineered the score to 162 for 6 by the mid-point of the 33rd over at which point Hafeez was brought into the attack. Hopton hit his first ball down Senanayake’s throat, Gilbertson Jnr couldn’t clear the in-field and Coleman followed almost immediately when he chipped the first ball he faced to Forsdick who juggled a pretty straightforward chance and ended up catching it in his leg whilst on the ground. 171 for 9 and Thomson had just Parrett for company to score the remaining runs with four overs to go.

The pair gave it a good go, though, Thomson, (16 not out), hit the ball cleanly and ran aggressively, but the innings closed 20 short of victory when Parrett connected with a Hafeez delivery only to see Senanayake move well to take the catch. Time to replace the old bat with something more powerful, perhaps?

Hafeez had taken 4 for 10 in just 2.4 overs, not quite as destructive a spell as his Trust League effort here in 2009 for Old Ruts, (http://sdacc.play-cricket.com/website/results/1105166), but decisive enough to help his team to a narrow win.

Good fun had by all and hopefully we can find a way to get this opposition on to the fixture card on a more permanent basis.

Next week the Sunday XI will be on the road with a Trust League match at The Rec. Details of what we arrange will follow soon. 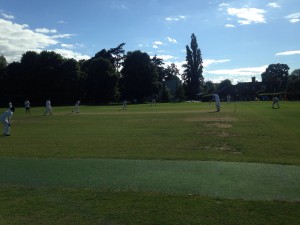