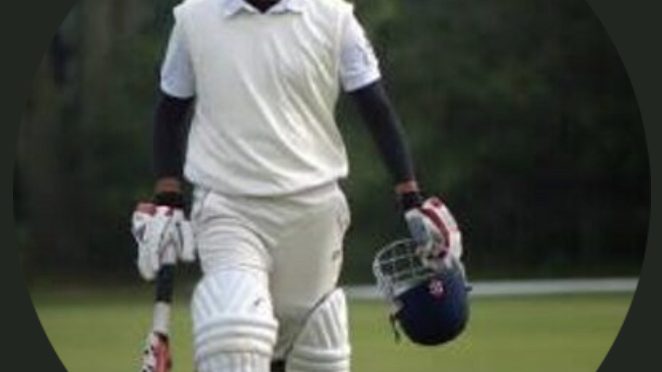 Stoke were well placed at half-time in this one but were unable to get the job done.

The not so good…Stoke made a dreadful start to the chase, slipping to 7 for 4 with three of the most prolific batsmen in the team making ducks and facing just seven balls between them.

O’Neill, (20), and Earl got the board moving before the former was lost to a run-out; and Carel Ferreira would joint top score with Earl, (29), as Stoke tried to take the game deep.

When both were out to sixth bowler Walter, the game was up and Stoke fell to 106 all out at the end of the 32nd over.

The geographical grouping at 1st XI leaves the team in a tough section but again much can be taken from the match. It’s Guildford next at the Rec. The feeling is that just one win could kick-start things.

Good availability saw a 3rd XI raised and after great work by Jase Earl to secure the fixture a Stoke XI, that would hold its own in lower level 2nd XI cricket, travelled to Merton to face an Old Ruts side keen to have us.

An examination of the scorecard in years to come may suggest that this was a bit of a drubbing; but Stoke were in this game at many points.

Batting first on a pitch that looked good but played very unpredictably; Stoke were well placed at 40 for 1 in the 10th over but slumped to 44 for 4 as the variable bounce did its thing. In his first game of the season Andy Berry looked good for his 26 before being castled by impressive young seamer Halstead.

Deepak Malhotra and invitee Peter Plant rebuilt the innings and took the score to 100; but another flurry of wickets saw Stoke in a hole at 105 for 7.

Malhotra fought hard and found some assistance from Geoff Vinall, (14), and Alex Bond; but was ninth out for 55, falling to a good catch on the line, out of context with the standard of the catching in the innings.

Bond clubbed an unbeaten 31 to lift the total to 173, the innings ended by Day, (7.3-1-14-3), who, like his colleagues bowled straight. Eight of the ten wickets to fall did so to straight deliveries.

With something to bowl at, if Stoke could replicate Old Ruts’ lines this could have made for interesting match. Sadly nearly all of the bowlers struggled for consistency.

46 runs came in quick time; and whilst Ralph Coleman and Vinall dismissed both openers with successive balls; these would be the only wickets taken.

James Morgan was unfortunate to see the next two batsmen edge him in the same over only to wrong-foot the keeper each time – it would have been 60-odd for four at that point. No.3 Woods and No.4 N.Yamin made the most of their reprieves, scoring 38 not out and 79 not out respectively; the latter teeing off at the end as the match moved towards an inevitable conclusion.

Although wicketless youngsters Aarav Goswami and Morgan were the pick of the bowlers, Vinall, (6-1-21-1), returned tidy figures too; but an early finish presented an opportunity to watch the end of the 1st XI match.

Thanks to Old Ruts for securing a pitch and offering us the fixture. It was good to see what a regular 3rd XI League opposition looks like as we continue to grow and identify what we need to do to go to the next level.