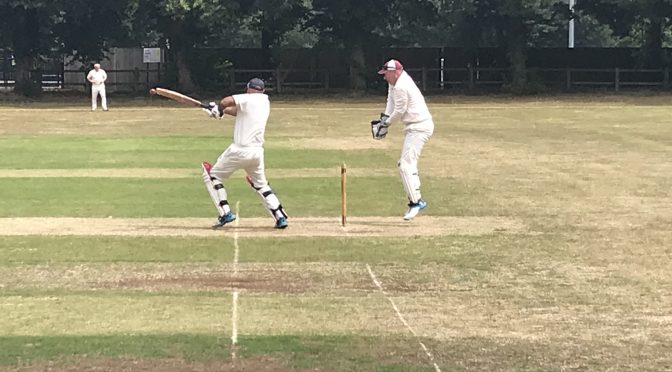 This was originally the only carded fixture but the stronger of the two sides defied a couple of rain breaks and the arrival of an air ambulance – nothing to do with the game – to secure a good win at The Rec.

Tasked with trying to bat first, that plan went out of the window as a few late opposition players arriving late meant they chose to bat on winning the toss.

With youth given their chance Aarav Goswami and Josh Millerd shared nine overs at a joint personal cost of just 31 runs; Millerd making it 122 for 8 on his way to returning figures of 5-2-17-1 on debut.

A bit of game management followed; but Cheam’s innings closed prematurely on 137 as late call-up Sanjay Goswami took 2 for 2.

To chase a score like this you need one or two sizeable contributions and some bits and pieces. This was how it played out. Kelso, (67), got some useful middle-time after his League game was washed out the previous day; Rob Butler, Rod Thomson, Arman Zaheen and Goswami Jnr all made it to double-figures as Stoke won with plenty of overs to spare.

This was a bonus game, made possible when a call to the wider membership found a few players keen to help. We took a call from Bank of England on the Thursday to offer us the chance to step in following the loss of their original opposition. We gave them the “give us a couple of hours but get something just in case” and the ringaround meant we got the numbers by the Friday morning; alas too late as they did what we suggested and sourced another opposition. So we now had the prospect of eleven guys not getting a game; but a visit to the board led to a call to the Avorians who were free after they cancelled their President’s game.

We diverted our players there and after a chance catch up with Tony Vandensteen and Dick Frost, we took on a highly sociable opposition who did what all clubs do and used the occasional player market to get the numbers; whites bearing Ashtead and Whiteley Village were on show, as was a latecomer with no whites at all who fielded and batted in shorts!

Anyway, to the cricket…Stoke batted first and Moumer Khara did what he does and bludgeoned quick runs. He lost Hassan Dahir to a catch in the gully, but Ben Townsend helped him move the score to 69 for 1 by the end of the 13th over.

Khara checked out on 49 and was one of three quick wickets that saw Stoke slip to 81 for 4; Jase Earl, making what we think was his 200th appearance for the Club, (we will check this as recent Play Cricket updates have interfered with some of the stats engines), helped Townsend steady the ship before they fell for 26 and 34 respectively.

Stoke were suddenly in danger of not batting their overs, but enter the unknown quantity in debutant Neil Douglas, who played superbly to make an unbeaten 40. He got help along the way from Harry Nawaz; and Stoke closed on 195 for 8; pick of the bowlers was Ashtead’s Caprano-Wint who returned figures of 7-2-14-3.

A lot of Douglas’ work appeared to be undone after the change around as Stoke helped their opponents to a flier; a quick 78 was on the board as the bowlers struggled with a wet ball following two rain breaks.

Dahir Jnr broke through when he turned one square to account for Delaney who made 32; but Avorians had loaded the top order with their best players and were well ahead at 117 for 1.

Earl bowled well without luck; but the game swung in Stoke’s favour courtesy of an unlikely source as Ralph Coleman came on and found four obliging batsmen; Caprano-Wint holed out to Nawaz at mid-on; Ellis was caught by Earl at point as one popped; Allenby, (45), chipped a gentle half-volley to mid-wicket where Townsend took a good low diving catch; then next ball a bandaged Waite was yorked to complete miserable day for him where earlier he sat down for a while after fielding a fierce cut shot with his skull. Coleman 4-0-8-4.

The hosts appeared to run out of batting and quickly. Earl, (7-1-23-2), and Adrian Mills, (8-0-31-2), took another four players out for a total of six runs; one to a catch at the wicket by Kevin Morgan who did a grand job at such short notice.

150 for 9 and surely it was over. However things were kept interesting as James Morgan and Dahir Jnr got further goes with the ball; Khara bowled two good fill-in overs, (one credited in the book to Earl that would cause some confusion later on); and No.5 Rehman found an ally in last man Weaver and they gradually chipped away at the target.

Earl was tasked with overs 38 and 40. By the time he started to go to his mark for the last just 14 were needed; but after a call from the scorer’s tent he was withdrawn under starter’s orders when word reached the middle that he had bowled his allocation? We were unsure, but chose note to debate this as we play nice; instead a volunteer was sought to bowl the last over and Townsend stepped up to complete a good weekend for him, castling Rehman for 37 to complete the win.

A very successful weekend carried on in the bars at The Avorians ground and latterly at HQ.

Let’s hope for more days like this between now and the end of the season.