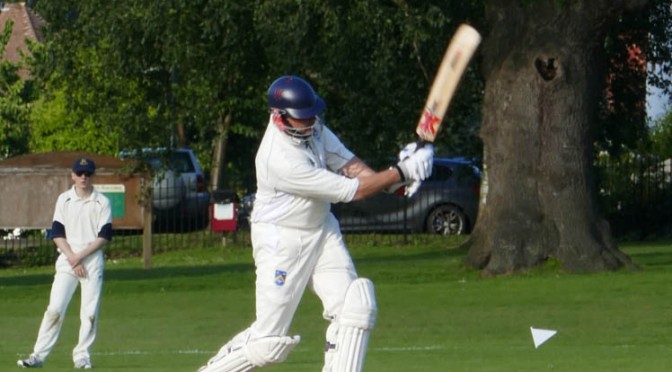 While 22 of the ‘League’ players participated in a second pre-League interclub match(*); high player demand for games led to the assembly of a 3rd XI in addition to our Sunday XI. Our good friends from Whiteley Village answered our advertisement and had us over for a game on their satellite pitch whilst their own seniors had a middle practice.

Stoke fielded first on a warm afternoon to allow for those needing to depart early; and Aarav Malhotra struck early with one that seamed away and sent fellow Surrey squad member Wood’s off bail into the next parish. With Geoff Vinall locking things down at the other end and good first change spells from James Morgan and Deepak Malhotra, the hosts struggled to 20 for 2 after 13; 33 for 3 after 15 and 49 for 3 by the drinks break. The second and third wickets went to Malhotra Snr who bowled 23 good balls and got his wicket with the other; and Mark Christie who castled Dimond Snr the ball after one misbehaved.

Some game management saw Steve Wade and late call-up Arman Zaheen given a turn with the ball; the latter buying a wicket, (49 for 4), but the board was now moving as Ahmed, (48), and Herzog, (22 off 9), took the total past the hundred. After a tidy keeping stint Andy Page castled the former, and Malhotra Jnr tried some spin to double his count for the day. 5-0-18-2.

Page, (2 for 8), collected a second wicket when Dimond Jnr chipped to square leg; Morgan Jnr returned to the attack and took a first wicket in senior cricket to finish with figures of 8-0-32-1. He bowled better than that and deserved more.

Numbers 10 and 11 played better than others to elevate the score to 173 for 9. Stoke’s fielding remained keen on a hot afternoon; only difficult chances didn’t stick and the watching Malcolm Dickson appeared impressed.

After the ‘bring your own food’ break – Boris, please allow Jo and all the others to their thing! – Malhotra Snr and Christie were tasked with setting up the chase. The latter was lost to a juggling catch in the cordon; but Stoke were up with the rate. The trouble was wickets were being traded for runs as Kevin Morgan; Malhotra Snr and Morgan Jnr were back in the shade, (no shed); and it was 49 for 5 when debutant Tim Edwards departed for 10.

Cometh the hour cometh the experience. Page and Vinall put together a nice partnership either side of drinks to leave Stoke nicely placed at 97 for 5. Vinall biffed a few, although was respectful until he found the temptation of the first ball he faced from the home captain too much to resist and went for 26 off 36.

Wade then joined Page and found rhythm early; a 43 run partnership left Stoke needing 34 off 8. Page was adjudged leg before for 40; but Malhotra Jnr played nicely to take Stoke to the verge of victory…then things changed.

With six needed, Malhotra Jnr, (13 off 28), and Zaheen departed within the space of three deliveries; leaving Wade and the captain to finish the job. Whiteley Village’s total was equalled with a few nudged & nurdled singles; but having missed the chance to finish things when a full toss wasn’t dispatched, a comedy run out next ball saw an easy lob to the bowler to tie the match with six balls unused. Wade finished on 42.

After a long wait for cricket, could there have been a better start to the season? Thanks to Whiteley Village for having us over, for their compliments on how we played it, (there were two lbw recalls in the fielding effort and we were creative with our bowling and batting orders); and we’ll gladly accept any invite for an end of season friendly.

Let’s see if we can get extra games on again next weekend and continue our growth. Availabilities to you know who, please.

(*) Some unofficial stats from last week’s/this week’s interclub games…last week saw a record run chase at The Rec; this week’s saw a record match aggregate for our ground; but the record innings total is still held by the girls…406 for 3, (note our World Cup Winner didn’t bat : http://sdacc.play-cricket.com/website/results/1193188)