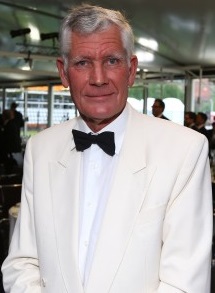 We contacted David Willis say that our thoughts were with him, and typical of the man he took time out to pen this reply.

It was very kind of you to write. Altough Bob didn’t play as many games at Stoke as I did it was certainly at the Stoke Rec that he honed his skills. We moved to the village from Manchester in 1954 and Bob and I were regulars at the ground on match days, carrying the players’ bags, putting the numbers up on the scoreboard and generally getting in the way.

Through the mid fifties into the sixties – Bob probably 6 years old to about 12 – we played endless hours on the outfield sometimes with our Dad sometimes with the Edwards boys, sometimes on our own. They say that genius comes from 10,000 hours of practice – it may have worked for Bob not quite for me. Most of those hours were on the Stoke Rec.

As something of a bright light in the fast bowling stakes Bob moved quickly from Stoke where he played with an old Surrey CCC man David Sydenham – and learned not only how to bowl but also how to drink beer – an important asset in the game! By the time he was 19 he was on the staff at Surrey and at 21 he went to Australia with Ray Illingworth’s victorious England team.

I still catch the train down from my home in Kennington near the The Oval and walk through the woods and over the hills to Stoke with my labrador for company, and take a turn around the cricket field. It is very gratifying to see the Club in such robust good health and it is a great credit to all those involved – well done!

Thanks again for dropping me a line.

David was very moderate about his own ability as his numbers on our Play Cricket site will show here : https://sdacc.play-cricket.com/website/player_stats_widget/batting_stats/798126?from=stats&rule_type_id=179