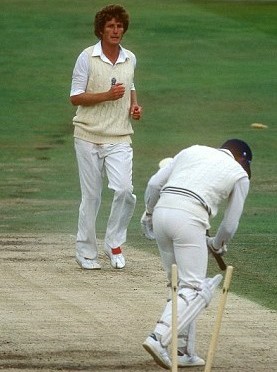 Everyone connected with the Club is shocked by today’s news. Our hearts go out to David W and his family.

Former Chairman Chris Gudgeon, now living in Canada, has taken time to pen the below:
The news today is very sad.
Bob leaves so many memories as a friend, neighbour and hero to me as a child.
On his return from Australia as a replacement to Alan Ward on his first tour I went round to his house on Bray Road where he gave me an autographed list of all the players.
I still have that treasured item.
He loved Stoke D’Abernon CC, visited us many times and was always humble as to where his amazing career began.
Rest In Peace, Bob

One of our greatest ever players, Dave Edwards, has contacted us to say the following:

It came as a great shock to hear of Bob’s death having known him and David for over sixty years. Bob, David, my brother Nigel and I all grew up in Stoke together and in time graduated to play for the club. I’m not sure if all four of us appeared in the same team…”– see below, David –“…but if we did it would of been in 1968 when Bob at nineteen was often far to quick for opposing village teams. It will be a great loss to the club to lose such a great supporter and will be much missed by all the members. My last ever game at Stoke’s ground was for Bob Willis’ XI against the club in 1993. Give my regards to all those who still remember me, especially Tony Vandensteen, and I hope to visit the Club in the forthcoming season.

My mind has had little else in it but memories of teenage with Bob…and beyond. All night Dylan sessions, morning chats at the station, concerts at the Festival Hall and the Gin Mill blues club in Godalming and Cream live in Hyde park…secret Sunday afternoon table tennis in the congregatoinal church, etc, etc…not to mention cricket !

An irreplaceable figure in my life who I’m deeply sad to know I shall not see again.

It would be good to hear from Tony. I’d love to see him when I come back to the Club sometime soon…during the 150 celebrations.

(It is especially gratifying to see so many names of members who came to the club to join the Colts.) Please do sent details when you have them….and I’ll do my best to be there. It was great to see the badge used so well…which, by the way, I created for the Centenary in 1970.

…and I’ll be buying from the shop in the new year.
It’s good to be back in contact.

Very best wishes to all!

A link to Bob’s full Stoke career figures appear at the bottom of this article.

Another of Stoke’s finest and longest serving players and captains Paul Worsfold adds:

I was shocked to hear the news of Bob’s sudden death.

My thoughts are with the family. Here is a picture of Bob and my son, (Matthew), for the colts awards. 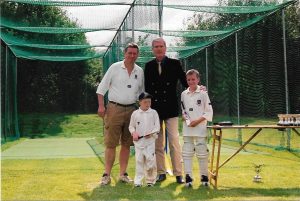 I had many happy times with Bob and his brother David, plus their mother Anne who was a regular visitor to the Club.

There are so many stories about his early life in Stoke D’Abernon.

One I liked was that Bob was given the sack from the local butcher’s, (Mr.Humphries), as a weekend delivery boy as he outgrew the delivery bike even with the saddle fully extended!

I wonder how many have seen the video interview with Alan Wiseman at the Club opening over his early memories at Stoke with Bert Roberts, Tony Vandensteen and the Edwards boys, Nigel and David.

One great memory I do have is of Mickey Stewart’s testimonial game at Stoke. Bob turned out for Stoke against a full Surrey side. The terrified look on the Surrey bats’ faces as he started from the ditch behind the sightscreen at full pace. The six man slip cordon for Stoke retreated as far as they could go after one ball, only stopped by the railway fence.

It was in retaliation for some not so pleasant press articles and comments from them over Bob’s move to Warwickshire when not given a Surrey first team place and Cap after winning The Ashes in Australia.

May he Rest in Peace.

Social media is also doing its thing and we would refer you there for the best coverage – and to the Stoke Twitter page @StokeDabernonCC – where we are trying to keep up with all the tweets and re-tweets.

If anyone would like to pen something in addition to the comments above, please e-mail them to stokecc@hotmail.com and we will post them here.