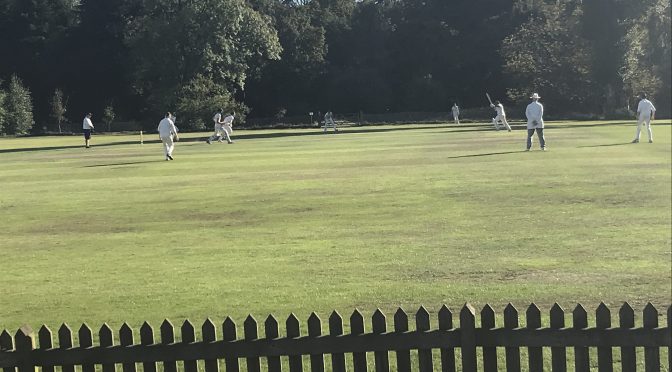 While many have called time on their season or chose to watch events at The Oval as their cricket fix, 22 guys made the most of the excellent end of season weather and played out a fun game where, for a couple of periods, Stoke looked like chasing down a good score that was based on a century by a 1s player who carried his bat.

Stoke were asked to field first on a glorious afternoon; but the initial bowling plans were sent into disarray by the late arrival of their opening bowler; Geoff Vinall manfully stepped up to new nut duties but the mis-match was clear. At the other end Andy Butler bowled well without luck, but with the bowling a little shorter than required for the good pitch on a few too many occasions, the hosts got a flier and were 91 for no loss after just 14 overs.

Rob Butler and Harry Nawaz slowed things down; the latter taking the first two wickets either side of drinks when Barber served up a return catch looking to push one down the ground for his half-century; then N.Heal used his feet but missed one that spun sharply and Deepak Malhotra effected a stumping…or was it caught behind? We’ll stay with the former.

In the context of the match Rod Thomson bowled an excellent containing spell, conceding just 24 runs in the seven overs he sent down; this helped the returning Rob Butler collect two wickets in two balls; castling home skipper Parmenter and A.Boosey. He finished another good afternoon with the ball with figures of 8-1-32-2.

159 for 4 gave Stoke a foothold in the game, but Butler Jnr’s double would be the last wickets Stoke would take. The bowlers all did their best, as did the fielders who had some long boundaries to chase the ball down to resulting in a lot of 2s and 3s; although nine dropped catches didn’t help the cause, the extent of our generosity notified to us by the home scorers, (plural – one of them kindly doing our book.) Chipstead also supplied umpires at both ends.

However to create as many chances as we did and hold a strong “Sunday 2nd XI” side to 231 having been 118 for 1 at drinks represented a great effort.

After the customary excellent Chipstead tea Stoke went for it; making sure they had someone in to go hard at the ball at all times; thanks to all the players for their flexibility and understanding when allocated their numbers in the order. Nawaz teed off and raced to a half century before Rory Harris had troubled the scorers. Harris Jnr eventually got off the mark but his hangover of a day ended when he was easily run-out attempting an improbable second bye.

Rob Butler hit a couple of nice fours before playing Russian roulette with one of many athletic fielders in the Chipstead line up that was definitely worth extra runs; and when Nawaz was caught behind for 60 off 52; then Thomson and Vinall didn’t last too long – the latter cleaned up by Chipstead’s 1s opening bowler who was thrown the ball to get them some control; suddenly it was suddenly 116 for 5, but Stoke were more or less up with the rate.

Malhotra and Richard Harris got things going again and gave Stoke a sniff of a victory with a partnership of 38 in eight overs; but again wickets were lost in a bunch to effectively end the contest; 154 for 5 was 161 for 9 in the space of a couple of overs as attempts to win continued. Malhotra, who hit the first ball he faced for six, continued his fine end of season form with a knock of 37 from 44, (good keeping earlier in the day meant another good day for him); and Harris Snr played very nicely for his 21.

So it was left for the last pair to bat out the game rather than throw it away with an asking rate of 15s. Arman Zaheen played nicely for an unbeaten 16 as the players shook hands with the home side victorious by 37 runs.

Thanks to Chipstead for their excellent hospitality; nice to see many of their 1s players, (who didn’t play), on site to watch the game; and to catch up with other players we have faced at various levels of league cricket in the past; notably Greg Barber. We hope that this can become a regular fixture. A proper cricket club, this lot.

Next week we’re working towards another Sunday fixture, (Saturday numbers look bleak), so if you are interested in extending your season, you know who to call.