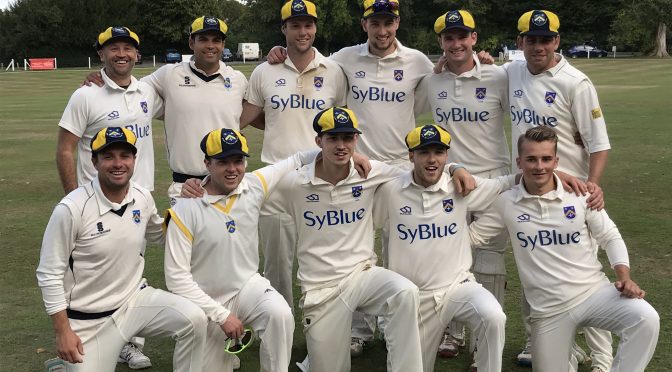 Back in 1986 a little village club in Stoke D’Abernon travelled to Bramley needing a win to secure promotion from the second division of the Morrant Wey Valley League, a competition several divisions below even the bottom division of the Surrey Championship. On the day one of Stoke’s greatest ever batsmen, Ian Wellman, made an unbeaten 104 and one of the most talismanic players ever to play for the Club, Mike Cooper, took 5 for 7 to get the job done. Scorecard : http://sdacc.play-cricket.com/website/results/1963649

Fast forward 33 years and the stakes were much higher. Stoke’s 1st XI visited Farnham in need of a win to secure a fourth successive promotion to the 1st Division of the Surrey Championship. Current captain James Trower registered an identical score of 104 to set up a big victory, the opposition’s order demolished by an equally talismanic player by the name of Shawn Dyson, who took a Stoke career best 6 for 21 to help complete a simply magical day.

The only thing that didn’t go to plan was the toss. Trower called incorrectly but got the outcome that he wanted and took strike with Max Subba Row. The pitch looked good but the moisture in the surface meant Stoke’s batsmen needed to proceed with caution.

Subba Row hit a couple of nice shots before falling lbw attempting to drive a third boundary; James Corbishley was caught at slip to make it 38 for 2; but Trower and Dyson batted to the verge of drinks, adding 47. The pitch was very difficult to get in on, evidenced by quite a bit of playing and missing, and Dyson chopping a number of deliveries into the ground or to fielders, and his frustration would ultimately get the better of him as he perished for 22 in the over drinks would have been called. 85 for 3.

Alastair Curran, (11), helped Trower add another 40 runs before he was bowled in the first over of spin; but with wickets preserved Trower and Ian Hopton upped the rate against moderate fourth, fifth and sixth bowler options. The pair added 70 in just over ten overs before Trower checked out to a stumping shortly after completing his highest score in league cricket. A true captain’s knock, he needed 71 balls to make his first 53, but just another 44 balls to reach his century. In total he faced 118 of the 195 balls bowled to the point of his dismissal, hitting thirteen of them for four. 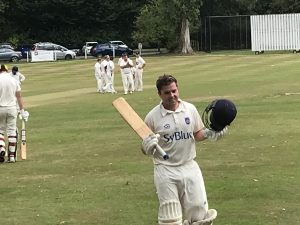 195 for 5 was immediately 195 for 6 as Robbie Blackburn called for an improbable single off the first ball he faced only to be, (rightfully), sent back; but Hopton found lower order assistance from Tom Frost, (13 from 11 – one of his fours hitting the scorer’s car); Roddy Kelso and Billy Zander. Hopton walked off unbeaten on 42 from 43 balls faced as Stoke closed on 240 for 8.

After an excellent tea Robbie Blackburn bowled the first over and had a new opening bowling partner in Subba Row, deputising new nut duties for the absent Will Frost; who rattled through his ten overs at a personal cost of just 21. Save for back to back fours off Blackburn by Hicks, the pair gave Stoke the scoreboard pressure they needed as Farnham’s top order took just 28 from the first 12 overs for the loss of Hicks who mis-pulled Blackburn to Zander at mid-wicket.

Opener Elstow was technically sound but in the early stages of his 1st XI career he seemed to lack the confidence to hit the ball and move the field; although much of this was also due to excellent bowling to excellent field placements. Having taken 49 balls to make just six, (all singles), he was leg before to first change Dyson off his 50th and, indirectly, had put pressure on the rest of the order.

Consequently Dyson cashed in. After his initial strike he wasted no time tucking into the middle order. He picked up his second courtesy of a sensational diving catch at deep square by Jase Earl; Zander made a fine low grab at mid-wicket; Golding was bowled; the 5-for was complete when Davies was leg before. Career best figures were secured when Steele could only fend a nasty bouncer up in the air that lobbed to Frost behind the timbers. Dyson’s final figures of 9-3-21-6 included six wickets for 10 runs – four of them an edge through slip for four – in the space of 30 deliveries.

With the door ajar and a sizeable away support on site to watch Zander did the rest. Steele and O’Mahoney – who offered some resistance with 33 – both served up catches to Curran on the circle; and before the social media department could send out news of the fall of the 9th wicket it was all over two balls later as Frost, (who kept another clean sheet), held a catch standing up to give Zander final figures of 7.4-1-23-3 and secure promotion with an emphatic 141 run win.

The win secured was necessary as one of the two potential chasing sides won big; but Stoke didn’t fall over the line, here. A second massive win in successive weeks leaves them looking at the higher divisions once again and speculating on likely opponents in 2020.

It was a fast trip back up the A3 for many who partied into the small hours with members of other XIs and long-serving players who have also played their part in turning said little village club turn into a giant. 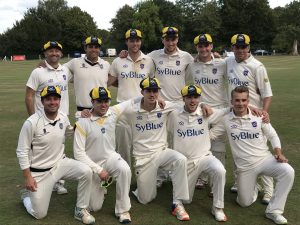 Let’s not forget the others who have made the season : Will Frost, Tom Dennis, Toby Tarrant, Jack Raimondo, Tristan Caviet, Mike Enslin, Will Gudgeon, Tim Handel, Ben Townsend, Kane Fullalove, Will Thomson and Will Harris