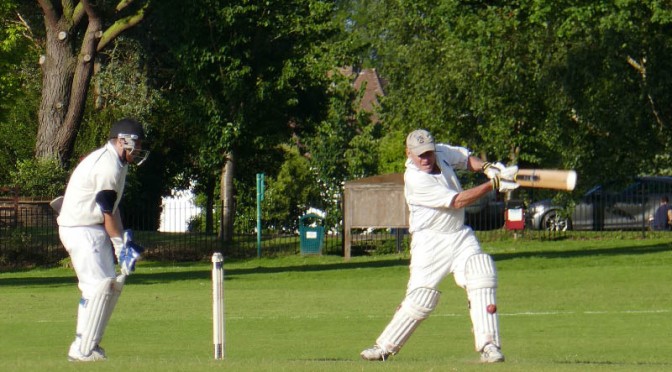 We were pleased to have a call from our friends at Chessington in response to our advert; a couple of our Saturday 2nd XI matches have resulted in last over finishes in recent times and the Sunday sides served up another.

Firstly a massive thanks to Hoppy for getting a pitch playable when the overnight deluge put the game in doubt. The start time was put back to 2.30pm but an efficient opposition were out there ready to start ten minutes early to make use of the very bowler friendly conditions.

Moumer Khara and Malcolm Dickson were leg before ahead the official start time; and soon after Deepak Malhotra became Stuart Jnr’s third wicket when he was bowled having looked good for his 17. Geoff Vinall knocked his new bat in with a four and a six before falling to an excellent catch at cover.

With Stoke being in a bit of a hole at 44 for 4 Rod Thomson toughed it out and found some support from Rob Butler who made it to 13 before being given out by his brother. The remaining ball of the over saw Stephen Finch lift the bowler back over his head for four, but sadly this would be his only scoring shot as he was unable to keep down a square cut in the next. Aarav Malhotra didn’t find the alien batting conditions to his liking and chipped a pie to the keeper as the opposition opened things up; and at 98 for 7 Stoke needed a few more which with some sociable game management the opposition kindly obliged.

Thomson continued to grind it out; and Andy Butler connected with a few. The former checked out for a gritty 27; the latter swotted a few more fours as he ran out of partners, being last out for 21 off the first ball of the last over delivered by the returning Stuart Jnr who finished with the match’s best figures of 6.1-1-16-4.

139 all out. Four an over on the pitch was something to bowl at, but Stoke had to bowl well.

Having missed out the previous day Aarav Malhotra quickly made his point, maintaining a great line to a left-hand/right-hand opening combination. At the other end the captain sprayed it like an unguarded hose but got the first wicket when he surprised the batsmen – and himself – with a full and straight one having started with two wides and followed it up with three long hops. Not a great tone to set and Geoff Vinall was quickly on.

Vinall bowled one side of the wicket and got one through No.3’s defensive prod; Malhotra Jnr the got a wicket he fully deserved in the last over he was permitted to bowl by age when the other opener was adjudged leg before by his teammate. Replacement bowler Andy Butler took out No.4 with a full delivery and Stoke were into it 30-40-ish for 4.

With so many bowlers in the side spells were kept short and the buy in from all the bowlers to this approach was much appreciated. The caveat was if any bowler looked like running through the order they could stay on; Khara threatened to do this at every turn, running the ball across the batsmen, and how the No.5 Tharumanayagam didn’t edge one into keeper Kevin Morgan’s gloves will forever remain a mystery. Morgan did another great job behind the timbers.

No.6 Newson did fall to that combination, but Tharumanayagam was going well and was moving Chessington ever nearer the finishing line.

Rob Butler took two in two to get Stoke back into it, but Tharumanayagam’s plan to get a boundary an over with the asking rate pushing fives was clear to see and he was generally successful; when not he was given a little extra help with a number of wides and no-balls – 43 extras would ultimately come back to hurt Stoke.

Khara, (7-1-19-1), made way for the return of Malhotra Jnr and we also discovered we had a player who could keep calm under pressure at the death as well. Having created two chances to remove Tharumanayagam that went begging, he then got his man for 36 with a straight one that kept low.

With 20 needed off the last four overs or two wickets to get things still could have gone either way. Butler Jnr, (7-1-30-3), castled No.10 but the over contained more extras. The No.11 was better than a No.11 – possibly listed there having done so well with the ball earlier – so there was still work to do.

Vinall came back for the penultimate over and dotted things down; Malhotra Jnr had just four to play with going into the last and did everything he could off the first four balls before the fifth was squirted through the covers to close out an absorbing contest.

Well done to everyone for making this game happen, and to Jo to another excellent tea. It was also nice to see George and Olli Nunn pop in to catch up with everyone having joined the ranks last weekend.

There is more cricket at Stoke on Thursday as the Over 40s have a return match against Weybridge after last week’s tie. Please make every effort to get down, cheer the team on and have a beer or two.

As for next weekend, get your availabilities in and we’ll source another home fixture.