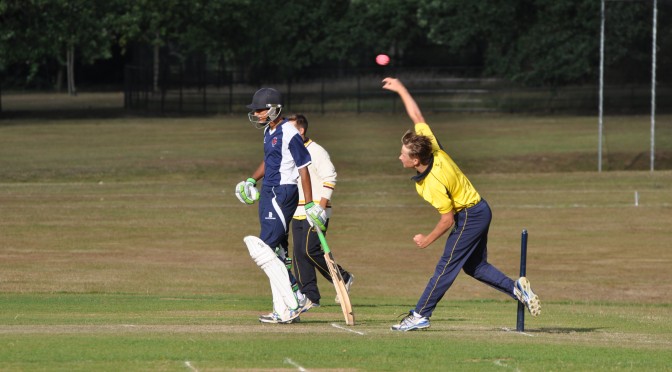 All change again at the top of the division as Stoke took second place in the table from Dulwich after beating them by four wickets.

James Trower won the toss and gave the hosts first use of a pitch that was always going to do a bit given the rain that fell in the week; Robbie Blackburn, (6-1-10-0), and Will Frost, (7-1-13-1), gave little away; the latter striking early when dismissing Patel first ball.

A lush outfield didn’t give value for shots either and whilst Purhouse and Khan progressed things to 41 for 1; many overs were used getting to that point as Shawn Dyson, (5-1-13-1), and Jase Earl, (7-0-19-0), continued to lock things down. Dyson made the breakthrough when Purhouse was caught at the wicket by Tom Frost, (one of four dismissals), for what would be the innings’ highest score of 24.

Subba Row’s afternoon turned a little for the worst when he was caught at the wicket off the first ball of the reply; and there were a few butterflies when Trower and Hopton were both back in the pavilion soon after with just 11 on the board; but Stoke’s deep batting order was little troubled thereafter; Dyson, (30), Alastair Curran, (27), and Roddy Kelso took Stoke most of the way there; Tom Frost, (15 not out), and Zander, (11 not out), knocked off the rest.

So the result now means if Stoke can win out no-one can stop them finishing in the top two. Bottom placed Sanderstead come to the Rec next Saturday, but they must not be underestimated having dismissed Dorking for 79 to keep alive their faint hopes of survival.