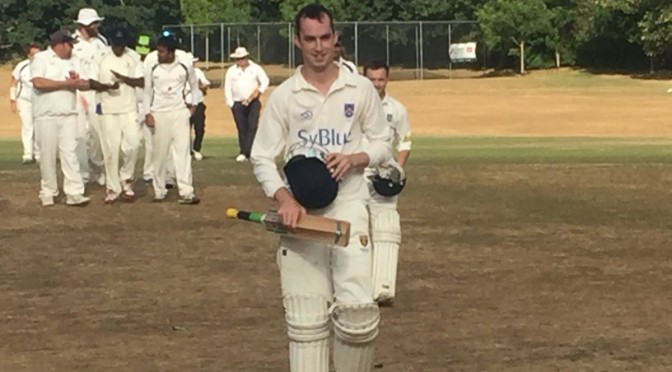 The unpredictability of this year’s 2nd Division continued as Stoke’s 1st XI took a moderate points total in defeat to Oxted & Limpsfield.

Stoke fielded first on winning the toss and made a similar start to the one against Old Rutlishians the previous week; an opening stand of 70 was followed by three quick wickets; two for Jase Earl, (2 for 34), including the prolific Jackson for just 8, and one for Max Subba Row.

But whereas Ruts were never able to break from the shackles, Oxted managed partnerships of 50 then 63 to take the total past the 200-mark; Powell, (74 not out), helping set Stoke 226 to win and what, with the way other results panned out, would have been a return to the promotion places. Subba Row, (2 for 41), and Billy Zander, (1 for 21), were the other successful bowlers.

Sadly the chase was unsuccessful. Subba Row and Handel added 48 in good time; but when Subba Row – second out for 52 out of the 77 on the board – departed, Stoke were unable to find the partnerships their opponents did and slumped to 88 for 4 then 117 for 6; Shawn Dyson the only other player in the top five to reach 20.

Ian Hopton, (36), found some support from Tom Frost but when both were dismissed in quick succession to make it 165 for 8, Earl was left stranded with the tail. Whilst an extra batting point was secured; Stoke’s destiny is now out of their hands despite other results elsewhere meaning they remain in touch with the top two.

The longest trip of the season to Dulwich next Saturday must result in a maximum point haul to keep pace with those above them.