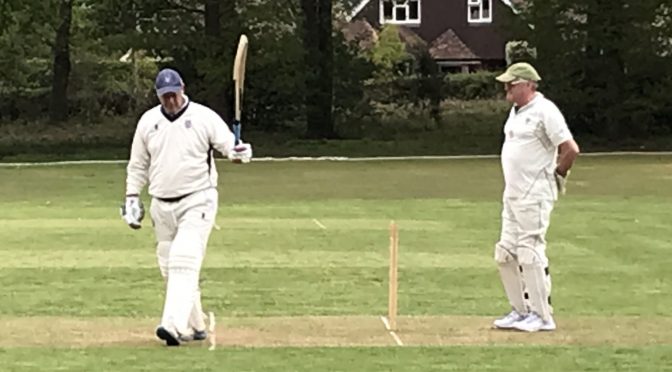 Stoke won the toss and decided to have a bat against the top side in the division yesterday. With a strong batting line up we hoped to put up a big score in the knowledge that they would try to chase whatever we got.

A quick start saw several early boundaries hit by openers Hamza Hafeez and Andy Berry before Hafeez gloved one to the keeper off Morley for 14. Tristan Caviet followed soon afterwards getting a bottom edge on a sweep to left arm spinner Vyvyan.

Will Patrick came to the crease and hit the shot of the day early on with a square drive for 4 before giving Berry as much strike as possible. Berry completed a half century just before drinks but then fell the very next ball for 51.

Patrick and Alex Clinton took the score to 100 before Clinton played on to Vyvyan. Will Harris joined Patrick at the crease and the pair put on another 50 runs to take us to the next drinks break at 150 for 4 with some clean ball striking and good running.

Unfortunately both fell shortly after the interval, Patrick getting a “good nut” from Morley and Harris hitting one back to Walker for 42 and 26 respectively.

The next passage of play saw spinners Walker and Vyvyan operating in tandem working to frustrate Jase Earl and the lower order. The hosts’ fielding was excellent and our run rate slowed. Earl picked off plenty of singles before getting a leading edge to be caught for 28.

O’Neill and Phipps helped Earl take us towards the 200 mark before the opening bowler returned to mop up the last 2 wickets.

200 was fewer than we had hoped for but potentially a defendable total. There was early swing available for Adrian Mills and Earl with the new ball and Mills stuck in the first over removing Lizieri caught behind for a duck.

After Earl’s tidy opening spell O’Neill applied some pressure with the ball. The run rate had dropped below 3 by the time Vyvyan walked having edged Mills for Patrick’s second catch off the day.

Mayes and Rashid rebuilt, slowly at first but increased the run rate once they had settled. The pair put on 107 for the third wicket, Mayes playing the moving ball with soft hands so any edges went to ground.

He got to 63 before swinging Jack Townsend to the mid wicket boundary where Clinton judged the catch well. Townsend then found the edge of the new batman’s bat with Harris claiming the slip catch. 2 in 2 balls! When on a hat trick you need to make the new batsman play and Townsend did just that but was met with an immaculate forward defensive shot by Shinwari.

Rashid brought up his half century before Shinwari fell to Caviet courtesy of a good catch at mid off by Earl. 150 for 5 was the same score we had been 3 hours earlier but alas that was as good as it got. Rashid, (70), and Madoc-Jones timed the ball to all parts of the ground to finish the game quickly.

Next week Stoke host Addiscombe and are hoping for a reverse of our narrow loss earlier in the season.