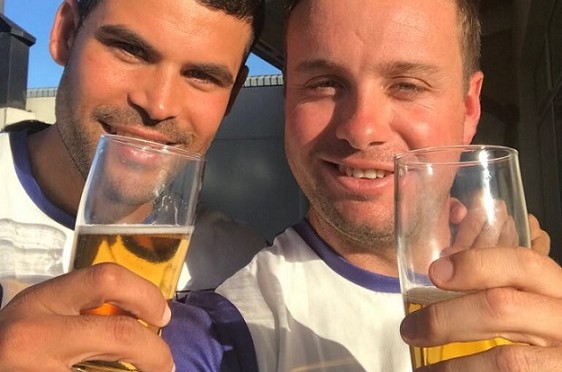 Stoke completed a win double over Worcester Park to move into second place in the table.

On a warm afternoon James Trower won the toss and chose to bat first. He watched Max Subba Row held in the cordon early, but in partnership with Ian Hopton 69 runs were added for the second wicket; Trower contributing 41 to the total before being caught at mid-wicket off Sagar, who also bowled Shawn Dyson for 11 later in his fourteen over spell.

Hopton, on his 200th appearance for the Club, anchored the innings superbly. Alastair Curran continued his good form and seemed to get the majority of the strike in a fourth wicket partnership of 41 of which he made 36 of them from just 31 balls.

Curran, Robbie Blackburn and James Corbishley all fell to Arundell, (14-0-63-3), but once he was out of the attack this allowed Hopton and new arrival Tom Frost to feast on the later and returning bowlers. The opposition tried to dry the boundaries up, but Frost was still able to find a number of them; taking 23 from one over as the declaration loomed.

Hopton eventually holed out for 87 from 136 balls with eight fours and two sixes; the batsmen crossed and Frost was caught at long leg next ball one short of a half-century. A couple of wickets were lost in the pursuit of quick runs before the declaration came at 254 for 9 in 52.5 overs.

After tea openers Rawlings and J.Hill made a steady start against Toby Tarrant and Will Frost; adding 40, but both were gone by the time the total reached 43; Hill edging Frost Jnr to slip, Rawlings chipping meekly to Subba Row at mid-wicket having had a couple of reprieves in the previous over.

Change bowlers Blackburn and Dyson ran in hard; the latter collected the wicket of Waite leg before to make it 56 for 3.

The pitch still played well, though, and R.Hill and Bradshaw near on doubled the total. With their exceptional over rate, Worcester Park were sure to receive more than the minimum 49 overs so run rate was not a problem.

A breakthrough was needed and it came from Hopton who bowled Hill, who had looked in little trouble to that point, for 46 behind his legs. This energised Stoke and seemed to have an equally deflating effect on the opposition who then lost a cluster of wickets.

In the same over Sagar had a wild hack at his second ball and was caught by Subba Row; Arundell hit Hopton to Will Frost. 111 for 3 was now 120 for 6.

And it didn’t stop there. After an entertaining contest between Dyson and Bradshaw, Dyson castled his man for 20, next ball visiting captain Wilkinson flashed but edged to Tom Frost behind the timbers; Faller-Fritsch was well superbly caught by Tarrant at long leg hooking, (Dyson ending with 9-3-29-4 – a season’s best for him); and Hopton completed the win when No.11 Bell was leg before. Hopton finished with 6-2-19-4.

An emphatic win sees Stoke travel to the Bank of England Sports Ground next week in good spirit hoping for another win-double. With the ever changing nature of the positions in the division BofE now find themselves behind Stoke in the table having started the day top.