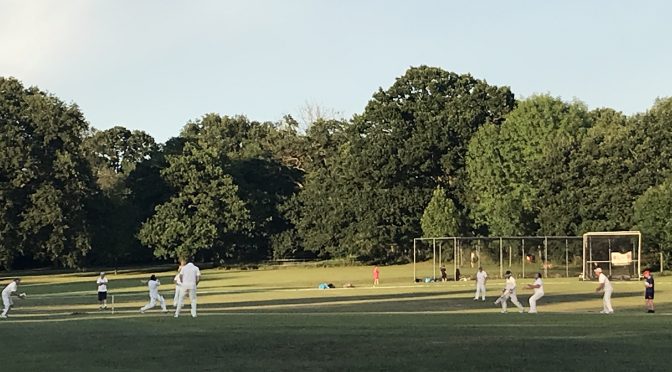 The Over 40s bounced back from Tuesday’s defeat to Walton with a good victory over a highly sociable Leatherhead side at The Rec.

Captain Kevin Morgan did a great job arranging the side despite an event at Parkside affecting availability and we were grateful for Shawn Dyson to come out of the bar and keep; and to Josh Berryman, (son of one of Leatherhead’s players), to guest for us.

Fielding first Morgan asked Jase Earl to oversee on-field operations, Earl himself, (3-0-8-1), getting some good overs in ahead of the weekend, snicking off Harrison to get Stoke on the board early. At the other end Berryman Snr played well for 30 before retiring to give others a chance; and after that the subsequent batsmen were tied down by Deepak Malhotra, (3-0-13-1), Harry Nawaz, (3-0-12-1); and some good fielding from all the players; Earl, Malcolm Dickson and Nawaz all making good grabs.

Williamson, Vos and Baldwin all made it to double-digits but the innings run-rate dipped to just over five; late wickets for Fraser Slater and Berryman who had a fun time in the field and did very well for one so young.

After the chase started with a three wides off the first delivery, Dickson was stumped later in the first over when giving it the charge and the keeper, standing back, under-armed the ball on to the stumps.

Morgan and new arrival Carel Ferreira played nicely to add 35; Ferreira hit five fours and a huge six towards the playground before retiring on 30 from 19. Morgan hit two nice fours in his 13 before chipping to mid-wicket.

Slater hit one boundary in a stay of 8 before falling to a decent return catch, (63 for 3), but Nawaz and Malhotra knocked off the rest in just 5.3 overs with little alarm as Stoke won with a full five overs to go. Both were watchful at first; but went through the gears once they had got themselves in. Malhotra ended up unbeaten on 15; Nawaz took thirteen from one over and finished the match with a six over the sightscreen, (see picture), to complete the win and end on 33 not out.

Good bar takings, boosted by some 1st XI players who came for an extra net, completed a successful evening on all fronts.