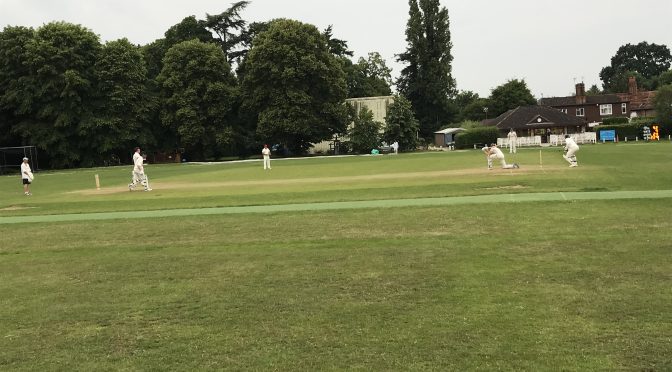 After Saturday’s League games attention turned to the friendly side of the programme and after a nice chat Chiswick were chosen from those who answered our advert looking for a weaker opposition; we pitched at that level after a couple of defeats last week and a few senior heads away this.

When the first few members of the opposition arrived, all seemed to be set up nicely, then things took a curious turn when the remainder – and majority – were from their Trust League team that contained Middlesex county players and one who had played for Surrey 2nd XI last year. Apparently the Trust game was called off and a chunk of the side originally selected was stood down.

So another ‘League’ game took place and Stoke managed their bowling resources accordingly. Geoff Vinall and Mashood Naeem bowled tidily until opener Sykes took sixteen from one over. Imran joined in the fun and at 57-0 Ben Townsend was given the call. His first was driven nicely for four by Ahmed but the next saw the off-stump bent back. With No.3 Redfern uncomfortable with Townsend’s pace, Stoke went back into friendly mode having made their point. Rory Harris got more overs into him and for the second day running should be pleased with his contribution.

Paddy Wilson was on the field for the first time this season and settled into a nice rhythm. Sykes had reached 65 but couldn’t resist charging at him and was duly stumped by by Rod Thomson who did a great job behind the timbers at short notice.

Redfern departed soon after when he was given caught at the wicket off Andy Butler by his teammate, but the bowlers and fielders stuck to their task and kept the run-rate in check despite Eyre relieving sone of his boredom with some boundaries. The result was a second wicket for Wilson, (8-0-41-2), and a first of two in a comeback spell for Naeem who castled Gandhi.

The total reached 200 when Naeem, (8-1-40-2), picked up the wicket of Eyre, (67 with 14 fours), to a well judged catch by Townsend; Wilson’s extended spell meaning debutant Rob Butler, (brother of), only got the chance to bowl at the death; but he did well having had no cricket since last year and snicked off the visiting captain – and probably their best player if a nice straight six was anything to go by – off the last ball of the innings.

To restrict the opposition to 229 for 7 on a good pitch was a great a effort.

With no volunteers to open with Malcolm Dickson, Ralph Coleman suited up and the chase commenced after Jo delivered tasty supplies. Dickson cashed in on anything loose; and with Coleman nudging the ball around a tidy opening stand of 55 at close on 5 per over formed a nice platform; ended when Coleman was unable to miss the man at mid-wicket.

Stoke fell a little behind the rate after that and lost three more wickets before drinks. Dickson’s knock of 44 with nine fours ended when he was caught by, effectively, a substitute fielder, (we were happy for the opposition to use all twelve players they brought…but ‘sub’ didn’t get a chance to bat or bowl – thanks for coming); Saud Ahmed was given leg before and Thomson was bowled.

Townsend and Rob Butler rebuilt things with a nice stand of 41, and this was enough for the opposition to press the panic button a little early and continue to keep League bowlers on. Townsend had constructed a nice 28 before being caught trying to go over the top; this then left Vinall with the uncomfortable prospect of facing the aforementioned Surrey 2s bowler who took exception to being hit for back to back fours and reverted to his traditional run up that more or less started from the sight screen.

All the Stoke players dealt with this far better than the keeper did, and having failed to bowl little if anything on the stumps his afternoon ended after just three overs; although his replacement – another Middlesex academy bowler – was more than decent for a social Sunday game.

Rob Butler played very nicely for his 29 before holing out looking for a sixth boundary. Vinall followed for 11 soon after when one kept a little low and went through his ‘defences’ and the the game was in danger of petering out as more Trust League standard bowling was deployed.

With Stoke more or less needing snookers, finally the match broke out into something more like what was agreed midweek; Andy Butler, (36 not out with a six and five fours), and Wilson, (18 not out with three fours and a five courtesy of overthrows from the Surrey 2s guy), put together an entertaining unbroken partnership of 60 to close the innings on 213 for 7; sixteen short but in many respects it felt like a win and the collective sense of pride in how we played the hand we were dealt could not be understated.

Next week normal Sunday service should be resumed when Old Ashfordians come to The Rec. If numbers are good, (possible with schools breaking), we will source an additional fixture.