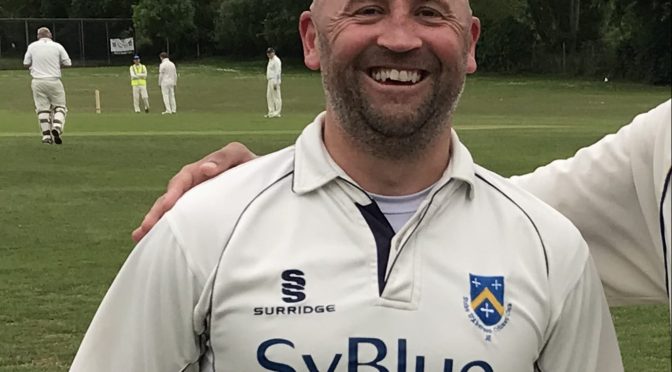 A second successive winning draw extended Stoke’s 2nd XI’s unbeaten run to three games with an evenly contested game at The Rec where ultimately an excellent pitch was the winner.

Stoke were asked to bat first and made a good start with Hamza Hafeez and Andy Berry adding 55 in 12 overs. Berry hit two big sixes and four fours in his 36, a knock that was ended by a good catch at cover off first change Patel just as daughter Anya arrived to watch him. Cue Anya’s prompt departure.

Dan Gluckman scored 26 of the next 42 runs added as the bowlers struggled to make in-roads in the heat; but Stoke had to re-start when Gluckman, then Hafeez, (35), were dismissed in successive overs.

Harry Nawaz and acting captain Jase Earl got things moving again with a second partnership of 55 in the innings. Nawaz played positively and looked like he could be taking the game away from the opposition when he was unfortunate not to be able to clear mid-on having reached 37.

Will Harris played nicely for his 18 before hitting a return catch to visiting skipper Standen; and Stoke could have been in a spot of bother when Deepak Malhotra, (leg before), and Ben Townsend, (run out), went soon after to make it 183 for 7.

However runs down the order were in plentiful supply. Earl was joined by Jeremy Connell, and the latter played nicely in his first match of the season. The result was an eighth wicket partnership of 63, more or less shared equally as Connell made 30.

With just the tail left Earl, who had passed the half-century mark, hit his 7th and 8th fours before being last out for 63.

In reply Ben Townsend sent down a succession of maidens to put the visitors behind the asking rate. With plenty of bowling options at his disposal, Earl tried five in the first 18 overs before the first drinks break. All did well, but the game was going through a stodgy patch as the board read 61 for 0.

With apparent instructions to get on with it, Harcourt, (27), had a wild hack at sixth bowler Connell’s third delivery after the resumption and missed; but opener Bhatt and No.3 Osman advanced the score to 97 with little alarm. Osman’s progress was checked when the returning Townsend had him leg before; and the bowler then became catcher a few overs later, moving well from cover to point to give Gluckman the wicket of No.4 Rashid.

The game was still, in the balance, but the draw seemed the most likely as the visitors were unable to score at the rate they needed despite having wickets in hand. Bhatt constructed a nice 57 but only found the boundary three times. He picked out Connell at mid-off off Townsend trying to up the rate.

Nawaz collected a couple of wickets when Doyle was leg-before for 16 then Lee, (19), hit a return catch to him having hit the previous two balls for four; but Standen and Pathan played out the majority of the remaining overs with little alarm. They found a boundary an over to prevent the fielders all coming in to join Malhotra behind the timbers. He did a good job on a long, warm session.

Townsend, (14-4-39-3), castled Pathan in his final – and the innings’ penultimate – over of the match to make it 226 for 7; but the players shook hands a few minutes later with two more added for no further loss.

Stoke took ‘Winning Draw’ points for their efforts despite the absence of their captain and a couple of players needed for 1st XI roles; the mini-league they are currently in showing little change as sides around them also drew or lost.