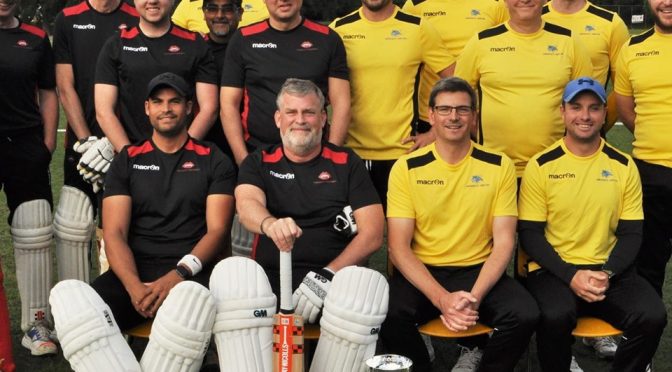 Over 1
Some redemption for Vinall as just four conceded; singles to Cheeseman and Gudgeon plus a bye.

Over 2
Nawaz given the treatment by Gudgeon who hits him for two maximums.

Over 3
The most eventful over of the match. Jones collects the wicket of Cheeseman with his first ball, a great diving effort by Tom Frost in the covers. The batsmen cross and Gudgeon hits the next one over the tallest tree…on the way up(!) to reach an enforced retirement at 20. New man Hopton hits a four but then falls to an incredible diving catch by Vinall at point. This leaves one left and Andrew Klimcke hits it into the houses for 6.

Over 4
Tom Frost gives the sizeable crowd a glimpse of his bent arm straight breaks; Mark Christie hands Oli Slipper the strike and he puts one into the houses; but later in the over Jones makes a good catch on the line to account for Klimcke.

Over 5
Slater’s over contains just one four to Christie and four singles.

Over 6
A big over needed and the Cheetah’s get one as Slipper hits Trower for back to back maximums in an over that yields 16.

Over 7
Vinall gambles and gives himself the penultimate over hoping there are enough runs for Dyson to play with going into the last. Slipper had to retire with his second six off Trower, so David Cook had the difficult job of teeing off from the off. A single, and then when back on strike umpire Handel adjudges him leg before.

When back on strike Christie gets three courtesy of buzzers; setting Will Frost up for back to back fours to take the game to the final over.

Over 8
Dyson needs to use all his skill to get the job done; restricting Christie, (18 not out), and Frost Jnr, (11 not out), to a handful of singles and a two; so the innings closes with the Vampires victorious by 7.

So the Vampires win the inaugural Stoke Smash!

Stay tuned for details of the re-match!!!