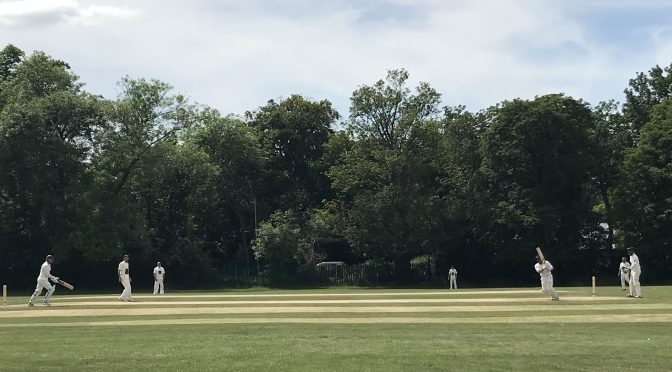 Whilst looking at the board for a Sunday fixture an advert from Cheam appeared to say that Dorking has scratched the intended league fixture against them and they were looking for a friendly opposition to fill in.

A quick call resulted in Stoke being asked to confirm by Friday morning that a side could be put together. Numbers fluctuated from 7 to 11 at various points; come Friday morning we had 9 but rolled the dice and went for it, backing ourselves to find another two. We did, then one was withdrawn by text within two hours of the scheduled start time. Miraculously one of our Sunday oppositions called for a friendly chat, and in the same breath asked if we were short, so an 11th arrived an hour after play eventually started late due to other punctuality issues. Has anyone read “Herding Cats” ??? If not, click here :
https://www.waterstones.com/blog/charlie-campbell-on-the-pleasures-and-pitfalls-of-amateur-cricket-captaincy

So with the captain fielding due to one of the 2s players forgetting that he had a tennis match and was going to be late; Moumer Khara was entrusted with getting the right result at the toss. On a baking hot day he called correctly; and after some general reluctance on the part of some to open the batting; Khara himself and debutant David Cook took strike with one square leg umpire in pads and the other scoring.

Khara and Cook played cautiously for 9.5 overs whilst the remaining resources arrived; Khara, (12), picking out the man on the line having hit three nice fours. Cook was solid and dropped anchor, allowing Harry Nawaz to crack a maiden century for the Club with 19 fours and an enormous six. Soon after Cook, who struggled to get the strike on occasion, (bad luck rather than any selfishness on Nawaz’s part), hit a return catch to depart for 33 to end a stand of 108; the first recorded century partnership in 3rd XI cricket.

Nawaz walked off on completion if his hundred to give others a chance at 176 for 2 but few took it; four wickets fell with no addition to the score(!) and from No.4 downwards only Kevin Morgan, (11), and Khalid Harris, (12), made double figures. Stoke were bowled out for 208 off the last ball of the 38th over.

A strange catering company policy meant that the players could not be served their tea until the players in the 2nd XI match had received theirs, so this made for a lengthy but nice break in play on a warm afternoon.

When play resumed, Mashood Naeem and James Morgan bowled tightly to put Cheam behind the rate. The good work was continued by Hassan Dahir and Harris who bowled to drinks. Stoke never really looked like taking wickets but the asking rate had gone up to a run-a-ball by the half-way stage.

The breakthrough was made by Umar Qayyum who dismissed Butt for 44 to end an opening stand of 96, James Morgan taking a good catch over his head at backward point. The quality of Stoke’s bowling was evidenced by the fact that he had only hit three fours. Soon after Nawaz and Ralph Coleman took a wicket each to make it 113 for 3; but Raval showed a good aptitude for hitting good balls, (and some bad ones), through a packed leg-side field for fours.

At 146 for 3 with nine overs to go, (the DLS par was 141), a couple of bad overs either way could swing the balance. Nawaz picked up the wicket of Hammond, an awesome catch by Khara who found himself in unfamiliar territory at deep backward square; but this unleashed a belligerent player in Saeed who played very positively. Again his preferred scoring areas were closed off and a wild swing against the returning Naeem saw him depart with 34 needed from the last four overs.

But opener Raval was still there and Stoke needed to call on their eighth bowler who struck the decisive blow. Khara conceded just six runs in three overs and picked up Raval for 80 courtesy of a great catch on the line by Naeem. Naeem then took a nice return catch to finish with 8-1-27-2, leaving Morgan Jnr the last over and he saw Stoke home to a 13 run victory.

It would be remiss of us not to mention an outstanding display of keeping by Kevin Morgan who took on the job after the original selection received a call up to play as a bowler on the adjacent pitch; and the fielders who all bought into where they were asked to go and why.

Despite some of the aforementioned logistical issues this was a triumph; young players got a valuable taste of senior cricket, those who didn’t make the league selection or could only play Saturday all got a run-out, and we got to take a look at newbies who we hope enjoyed their day and will make Stoke their home.