One of our golden generation turns 30 today!

When not doing his bit for World Peace in Somalia and other parts of the world, Frosty has taken time out to pen this for your enjoyment:

Here is my submission for my greatest Stoke XI:

1. Jack Raimondo
I know, I know an opening batsman who is scared of fast bowling!? But I have seen Mr Prawn – the self-confessed ‘closet six footer’ – score more runs and more match winning innings than almost anyone else. This added to his, (ahem), social contribution and the fact that we used to played rugby together from the age of 4 means that he is a shoe-in to open the batting in this team. 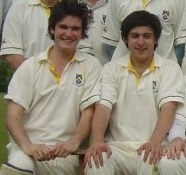 2. Ian Hopton
Hoppy’s love for Stokey D, (and living for free for 5 months of the year at the Patricks’), knows no bounds. His batting gets better every year and he has introduced us to some seriously talented overseas players. From my unique position behind the stumps I get to enjoy him sending down several wicket taking balls per spell. Thank God Hoppy did that gap year at Parkside and thank God for his British passport! 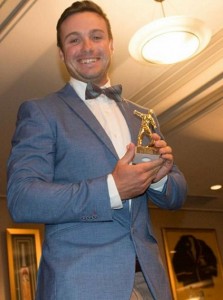 3. Timmy Handel
What can I say, the most natural striker of a ball I have ever shared a pitch with, (maybe apart from Jason Roy…actually it’s definitely Jason Roy but Timmy is a close second.) I feel lucky to have played with him as many times as I have especially as he was clearly better than the level we played at especially in the Fuller’s days! Although his fielding has declined in recent years he remains an all-round double yolker and one of the loveliest blokes I have met through the Club. 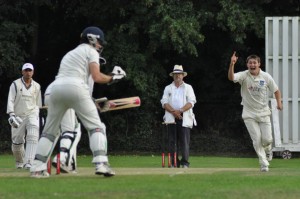 4. Hiken Shah
OK fine I admit it he bought me a pint in exchange for missing a straight one v Chipstead in 2009. Sorry Hickster!!! Jokes aside Hiken was genuinely unlucky not to become a household name on the First Class or even International scene, he was that good, (First Class average of 42.35.) The better the opposition the better Hiken got and when we were a team of talented but erratic youngsters he won us untold matches. He also took a ridiculous amount of wickets with THE MOST gentle off breaks in Club history. 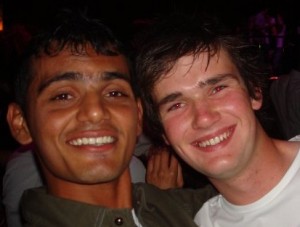 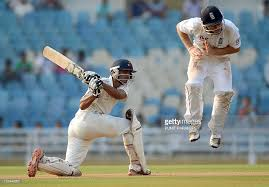 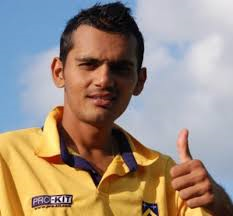 5. James O’Gorman
That cover drive…THAT BLOODY COVER DRIVE!!! Another who I feel lucky to have played with as he was clearly capable of playing a much higher level. Gifted, handsome and a bloody good bloke to share an Asahi with, it’s just a shame that he couldn’t deal with UK visas and immigration quite as easily as he dealt with overpitched bowling. 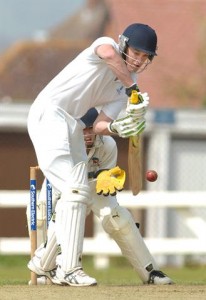 6. Will Gudgeon
“I bet he’s quick” is the usual first impression for opposition players who have never played against Gudge, little do they know that this gentle giant got the yips when he was 17 and can’t land it on the square! Gudge will secretly be fuming that I have him this far down the order. The best No.3 in the Club, his ability to take the game away from the opposition is scary. When Gudge gets in he likes to stay in and he has a penchant for scoring big hundreds and smashing some of the biggest sixes that I have ever seen. Another who I have played with for well over a decade and is as good value off the field as he is on it.

7. Shawn Dyson
Bomber is probably one of the most useful players to every pull on the Stoke shirt. It is hard to compare Overseas players because of the difference in opposition, but he definitely would have broken more noses in the lower leagues! Bombs is so much more than a mercenary just chasing the Yankee dollar, he is a fully committed Club man who spends more time helping the colts than the senior players. Topping the runs and wickets in league cricket over the last two seasons, what more do I need to say? 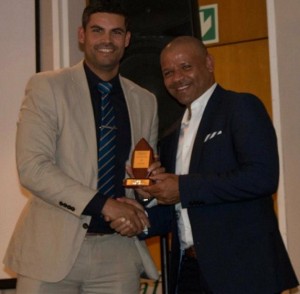 8. Andy Page (Captain & Keeper)
Leader. Captain. Legend. The only man who I have brought to tears on a cricket pitch, (apart from that child in a Sunday game, but I’m not as proud of that.) Pagie brought me to the club in 2006 with the promise of easy runs and good wickets, but then consistently batted me at No.8. A consummate Club man – if you cut Pagie he bleeds blue, silver and gold – he should probably get that looked at, (wait for laughter and applause), and his enthusiasm for winning the right way as well as his ability to protect his team and confront opposition players who have stepped outside the Spirit of Cricket mean that he is the only choice to captain this side. 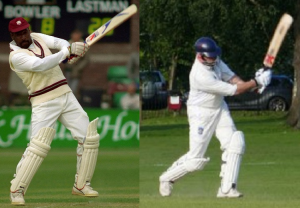 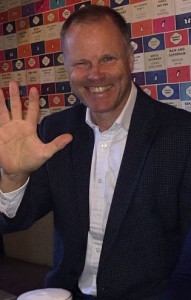 9. Sam Levido
The summer that Levi-Dog spent at Stoke produced so many unforgettable memories for those who were there. Who can forget the mullet, the time he spear tackled Richie during a game of touch rugby or when he shared his Amsterdam canal story with everyone… ah memories! The only player in the team who probably isn’t here on cricketing ability, but it’s my team, my memories and when we were both 18 we had the summer of our lives! Also, he would have taken far more wickets if Mike Baker had given all the edges that I took standing up to his away swingers. 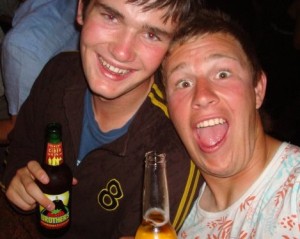 10. Will Frost
Yes he is my brother, no nepotism is not why I’m picking him. I have seen Willo bowl some of the most unbelievable deliveries and dismissed some of the best batsmen who we have played against. As the 1st XI has progressed up the leagues his bowling has got better and better, although like most spinners he is not afraid of buying several wickets a season with some absolutely filthy half trackers! He continues to beat good batsmen regularly and from behind the sticks I always feel that the next ball will be a wicket and you can’t ask for much more from your lead spinner. 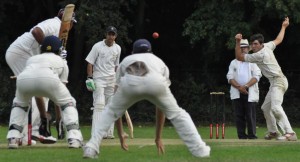 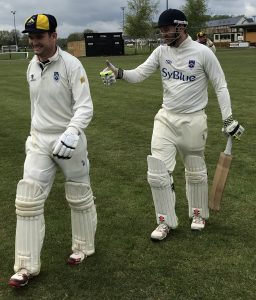 11. Toby Tarrant
Lots of good candidates for this spot, but TT has to be the most consummate No.11 I have ever seen. You look at his pads, his different borrowed bat every week and the way he wears his helmet and you just know he’s here for a good time not a long time. Just to make it clear I’m picking July/August Toby here because early season Toby, boosted by his reluctance to net, is generally slow, short and a bit of a buffet; but once the mid-point of the season is passed he turns into a new bowler and sends down absolute seeds with regularity. This added to his off field persona make him a pleasure to keep to and share a dressing room with. 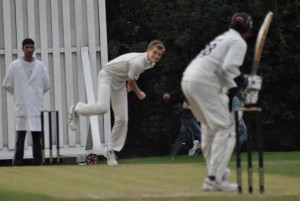 Scorer : Richie Parrett
An honourable mention here to Richie another friend from the Cobham mini rugby under 5s when Francis Parrett first taught me the step which still scores so many tries during our touch rugby warm ups. We played age group cricket together when I first joined the Club and his dangerous in-duckers are still potent today. His scorebook is a cornucopia of different coloured pens and mini stats which I will happily study if I have scored more than 20. He also sometimes records my byes as leg byes and for this I love him. 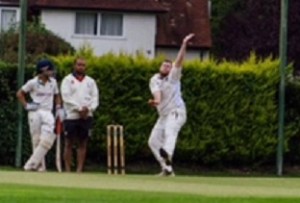 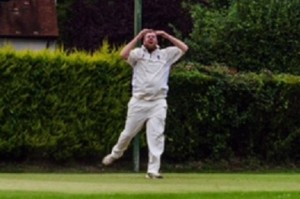 Umpire : Drew Patrick
The Chairman and our no.1 fan! Another man who has given so much to the Club over the years. He couldn’t bear not being involved in the games so he became a qualified umpire so that he could see me getting bowled trying to pull full balls from 22 yards. Now that we have panel umpires he isn’t seen at the Club as often as he was which is a shame, but he is definitely worth his place as my all-time Stoke umpire.

12th and Reserve Scorer : Ralph Coleman
Unlucky not to sneak into my team, his refusal to let me stand up to the stumps and let through loads of byes possibly edged him out. My favourite Ralphie memory is back in the day in a close game he tried to field one with his feet, missed and let through a boundary, being the conscientious keeper I was I berated him for not trying, later in the over the ball went his way again this time he fully committed to the dive but again missed the ball which went for 4, prompting him to ask “is that better?” at me from the boundary. I considered my response for just a moment before as loudly as possible shouted back “NO!” As a scorer his dedication and concentration is second to none and nowadays I can always be sure whether I got a 9 or 10 ball duck.

So, Frosty’s side goes into the archive here : http://www.stokecc.co.uk/my-greatest-xi/

If you fancy having a go at selecting a side, send it to stokecc@hotmail.com and we’ll publish it here…