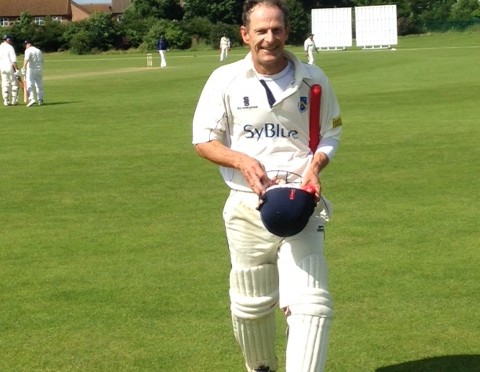 An uncharacteristic performance by Stoke’s Sunday XI saw them crash to a nine wicket defeat to new opponents Odney who enquired about a fixture last weekend but were just too late. This week they got in early when we placed our ad and brought a very sociable side along who stayed behind quite a while afterwards.

Pre-game discussions saw the visitors keen to bowl first, and with Stoke happy to back their batting line up despite the traditional multiple drop outs, the token toss saw Alistair McMillan and Moumer Khara take strike against visiting captain Finlay who was sharp for a Sunday bowler; and Van Heerden who landed his gentle medium pacers in good areas.

Khara Snr was well held by Bailie off Finlay for 11; and Carel Ferreira hit first change Moss’ sixth legitimate ball to one of several skilled circle fielders; but McMillan and debutant Richard Harris put Stoke into a decent position at 80 for 2 as the drinks break approached; but then the wheels came off.

McMillan, (36 off 61), missed a full one then Harris Snr who looked good his 31 fell to a decent catch on the circle.

Rod Thomson and Ralph Coleman tried to bat a few overs in the hope that the extra batsman would arrive, (two expressed an interest in playing but when left to agree amongst themselves which one would report neither did), and despite hitting a boundary each they were unable to spread the field; much of this due to left-armer Dickie who sent down four overs for just three runs, taking the wickets of Coleman and Geoff Vinall with successive deliveries before the opposition opened the game up.

Sameer Khara gave Thomson some support but fell to a good overhead slip catch. Thomson himself was the last but one to fall when he was also caught – 120 for 8, effectively for 9 – it was a surprise to many that he only had 12 to his name having hit so many good shots, unfortunately straight to fielders.

Stoke were indebted to Shawn Dyson for covering one of the spaces created by the aforementioned drop outs; and bets were taken on how quickly the opposition would work out that he was he was amongst inferior players. A massive six over extra cover was evidence enough, and he smashed 23 before holing out on the line attempting a repeat in the final over. 148 was now something to bowl at, at least.

Stoke’s hospitality off the pitch – notably Jo’s excellent tea – was sadly matched by the bowlers and fielders when play resumed.

Dobson was given an early life when he mis-drove Sameer Khara to cover. Khara Jnr, and opening bowling partner Rory Harris bowled very well, the latter beat the bat several times, before Dobson and his partner Wilkinson worked them out.

Disappointingly the usual strong suit that is the change bowling had a collective nightmare and a ten over period saw the opposition scoring at tens off a succession of poor deliveries.

Thomson restored some order when he found Wilkinson’s edge and Vinall took a sharp slip catch; but No.3 Bailie, fresh off the back of a century last week, and Dobson who continued to hit the ball in unusual areas, knocked off the rest of the runs.

Two further chances went to ground along the way and the winning runs came courtesy of four byes to sum up the afternoon.

We’ll draw a line under this one and go again next week. Get your availability in – no drop outs, please! – in ASAP so we can assess our strength and find an appropriate fixture.