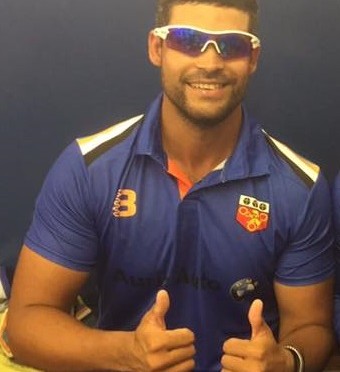 Stoke got the rough end of the toss and their pre-season programme ended with defeat to Epsom.

Difficult batting conditions saw Max Subba Row and James Trower tough it out early, but both were dismissed by Somerford, (2 for 21), with just 27 on the board.

Will Gudgeon and Shawn Dyson were more fluent, making 32 and 52 respectively. Gudgeon hit the innings’ only six, and whilst at the crease he moved to tenth all-time in the Stoke runs aggregates, (he now has Dad ahead of him next); Dyson’s rain, erm hailstorm, interrupted innings ended when he was fifth out with the total on 114.

The weather pattern ensured the pitch remained difficult for batting and only Ian Hopton, (14), reached double figures thereafter as the last six wickets fell for just 13; three of them to Abeywickrama whose 1.2-0-6-3 contained five wides. Chisoro, (9-2-27-3), also bagged three.

After tea, Robbie Blackburn struck early when Patel was caught by Gudgeon; but additional early wickets proved elusive despite tidy bowling figures all round.

Hopton made it 42 for 2 when he dismissed Berry for 25 courtesy of another catch by Gudgeon, but Edwards, (40 not out), and Moore, (46), took the visitors to the brink of victory with a stand of 77; Moore was dismissed by Dyson in the over before the winning hit.

Stoke begin their League campaign next week with a trip to Worcester Park.