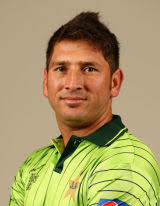 After Yasir Shah’s 14 wicket haul last week an article appeared on the web, (see foot of this post), suggesting that he is probably going to be the fastest ever to take 200 Test wickets. His current count is 195 at an average of 28.23 and a strike rate of 54.45. All this from just 62 innings bowled in his 32 Test career that is just over 4 years old. Decent.

We took a look at our Club stats to see how we compared and the answer is…very favourably!

Although Yasir has played in fewer games and bowled in fewer innings he has the advantage of unlimited overs and the chance to bowl out the tail twice in a match.

Three other Stokers have needed less than 100 games to reach 200 wickets; Phil Johnson, Jack Massey and Ken Hutchinson. Note they are all from previous generations when the standard of pitches and opposition that we played on and against wasn’t always as high as they are today; although let’s not take anything away from them.

When looking at strike rates, Ollie Hood and Phil Easton are the only two bowlers who needed less than four overs to take a wicket; Ollie’s career strike rate and average for his first 200 wickets staying pretty consistent for his next 467.

Here is the complete list of Stokers with more than 200 wickets; sorted by how few games played to get there, the strike rates and time taken to get to the landmark : 200th Wicket Analysis
The Strike Rates are approximate as we can’t tell the exact over or ball that the 200th wicket was taken

Let’s also look at the current Stokers not on the list who are approaching 200 career wickets:

One who could buck the trend and join the list of players from yesteryear is Nico Spreeth who has a strike rate of 22.13 for his 174 wickets, (average 16.22), but he has already needed 122 games to get there, (having bowled in 105 innings), so won’t top the list of fewest games.

Further down the list Shawn Dyson has 78 wickets from 39 games and currently only needs to bowl just over 4.1 overs to take each of his wickets, so he could threaten the above if he continues or improves in future seasons.

Another to watch is Jack Townsend. If he makes his expected return to playing action next season he could improve on his 79 wickets from 67 appearances and a strike rate of 28.05.

Test Match v ODI
Yasir’s figures relate to the Test arena. What about ODIs? In the shorter format no player has got to 200 wickets in less than 100 games. Saqlain Mushtaq managed it in 104 and is the only player to do so in less than five years, needing 3 years 249 days to get there. Keep an eye on Afghanistan’s Rashid Khan, though, who has 118 ODI wickets in just 52 appearances.

Only five Stokers have reached 200 wickets in less than five years; Hutchinson and Easton, (the latter crammed 138 appearances into three years and 49 days!), got there quicker than Saqlain; Johns, Alan Rutland and Mike Cooper complete that quintet. Coops might have got there even quicker had he bowled more than nine wicketless overs in the whole of his third season of bowling in 1983.

As Stoke play pretty much all one-day/innings matches, it is arguable that the ODI list could form a better comparison, but it some ways it would be hypocritical as we play many timed/unlimited overs matches too and the players on the above CricInfo list are capped at ten overs, (or 11/12 for those who played in the old days of 55 and 60 over ODIs.)

We’ll let you decide how you interpret the above, but in conclusion we think that in many cases are bowlers are better than Yasir Shah!