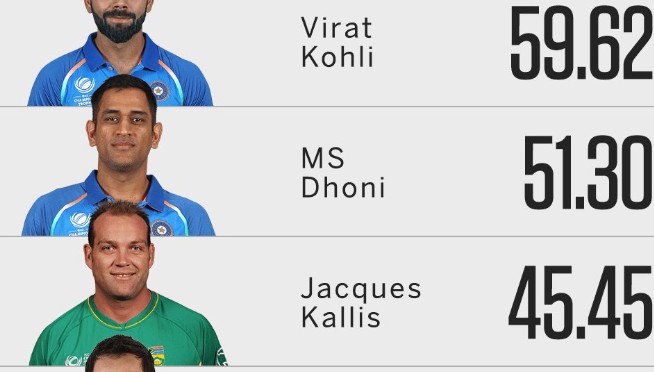 When Virat Kohli became the thirteenth player to reach 10000 ODI runs yesterday, (see link below), this image appeared on the web soon after to say that he had the highest average at the point of reaching that landmark. 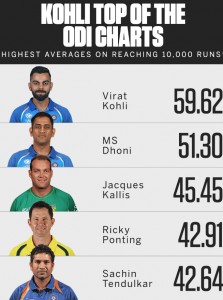 You may need to click on this image to enlarge it depending on what device you are viewing this on.

Having highlighted one of his bowling stats here a couple of weeks ago, (http://www.stokecc.co.uk/2018/09/29/stokers-betterworse-than-virat-kohli/), congrats to him, (and MS Dhoni), on having a batting average higher than any Stoker at the point of making their 10000th run.

Four Stokers have made 10000 or more runs for the Club; Alistair McMillan, Ian Wellman, Phil Easton and David Edwards.

Phil needed 272 innings to get to five figures, but got them at a very impressive average of 48.78; better than Jacques Kallis, Ricky Ponting and Sachin Tendulkar who all had lower averages when they reached 10000 runs.

For the record the averages at the point of reaching 10000 runs, the number of innings taken and the current & final Club aggregates and averages for the four Stokers are:

In terms of time Phil took just 8 years and 95 days to get there; much quicker than Kohli who made his ODI debut 10 years and 68 days ago; although Kohli only needed 205 innings to get to his landmark; a record that looks set to stand for quite a while as the only others near, (the now allegedly ‘retired from List A cricket’ Chris Gayle and the ever reluctant AB De Villiers), have already had more knocks than Kohli. Only Hashim Amla, (169 innings for 7696 runs), has had fewer innings than Kohli if you set a minimum of 7300 ODI runs.

Back to Stoke only Jack Raimondo and Will Gudgeon have better averages than messers Edwards and McMillan, (using the same minimum 7300 runs criteria), which puts a lot of the achievements above into perspective.