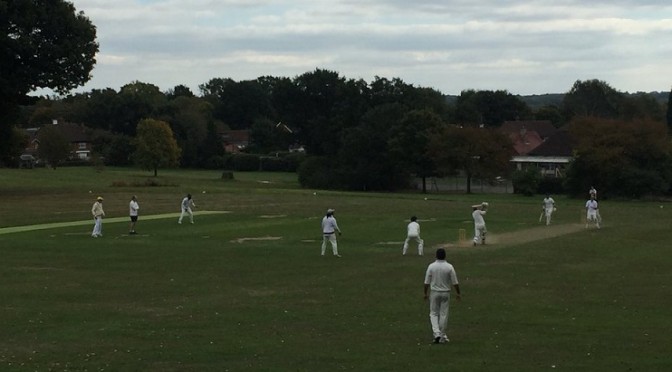 More late season fun and a triumph for patience. As the weeks go by and more players call time on their seasons, some having previously said available, there was still a Stoke side ready for a game if an opposition could be found.

The fixture we originally hoped we might get never materialised, so a advert placed late in the week was done so more in hope than expectation as clubs – including ourselves – switch their thoughts to square repair and other grounds are lost to other sports.

However there was a late development on Saturday afternoon. The Min CC, (who came to Stoke exactly six years ago), contacted us to say that they were on the lookout for a game as their original opposition thought that the game was on the Saturday. Keen for a game as a result of that issue their captain asked one of their Sunday oppositions if they might have a pitch free. Yes. Were we still looking and were we interested? Absolutely!

So off to Newdigate CC we went; lovely ground and now with a new pavilion and bar since we last played there. After a meet & greet, Jase Earl won the toss and chose to bat in a 35:35.

With fewer overs of batting available than normal, Justin Jones and a Geoff Vinall were tasked with giving it a biff early doors. The latter departed early targeting an inviting short square boundary; but Jones and Earl put together a punishing partnership of 157 in just over 18 overs before both fell on the same total.

Jones hit the bad ball, and a number of good ones, very hard. He reached his half-century off just the 23rd ball he faced, (hitting the opposition skipper for three sixes in one over), and 31 balls later he was lifting his bat having completed one of the fastest centuries in Club history. He was lbw 113 from 67 soon after, (10×4, 6×6), off the last ball of the 20th over; four balls later Earl, who had moved serenely to 48 and passed 3000 career runs for the Club in the process holed out in the deep.

This double-strike brought the Finch brothers together; and they put things back on track with a partnership of 46. Finch Jnr’s departure for 17 sparked a mini-collapse from 211 for 3 to 212 for 6 – short stays for Kevin Morgan and Aydin Huseyin – but the President and Raja Singh added 39 off the last 35 balls to close the innings on 251 for 6.

Finch Snr, (47 not out from 43), continued his excellent late season form and two straight sixes were a particular highlight. Singh made a run-a-ball 16.

After a 20 minute break, Stoke’s formidable total looked more so when the second ball of the innings, delivered by Rory Harris, was guided to slip and Huseyin did the rest. Back of a length worked here, but generally this wasn’t the way to go as No.2 and No.3 launched an excellent counter-attack, moving the total to 85 before ten overs had been completed.

Vinall got reward for a more fullish length when Huseyin held another good slip catch then Earl, who brought himself on earlier than planned, despatched the opposition’s Chris Gayle look-alike lbw for 47.

It was still very much game on, though, as the ‘home’ side continued to find the short boundary with regularity. No.4 Saif was tied down by Huseyin, but boundaries flowed at the other end as there were fewer 5th/6th bowler options than normal, Singh limiting choices further as he was only able to keep wicket.

Huseyin, (6-0-24-1), picked up the skipper courtesy of a good catch in the deep by Jones; but another half-century partnership left 78 needed off the last 11 overs and two batsmen well set.

Earl continued to read the game well, and another short burst from him gave Stoke the required breathing space. Asif was lbw for 50, Ishmael bowled for 34 in his next; (Earl 5-0-11-3); and a brace of wickets from Vinall in his last over, (7-1-44-3), one of them another catch for Huseyin, got the fat lady warming up.

The Finch brothers had a turn each, Mr.President winning the best player in the family debate by castling No.10; so this left the last pair needing 57 off the last four overs.

Thurston Selvakumar and Morgan were great in the field, and were both offered the chance of a bowl, but both declined so Ralphie handed his cap to the umpire and marked out a run up for only the second time this season. Rotator still not right, he managed to get his first delivery into the batsman’s half, triumph in itself, and it was obligingly scooped into Singh’s gloves to end the match that was played in a tremendous spirit.

Thanks to The Min for selecting us off the board for the fixture, and to Newdigate CC for preparing an excellent pitch. With an increased Sunday XI programme next season, hopefully we can play both clubs.

But that’s next year. Numbers look decent for one last hurrah next weekend and the prospect of a bit of history if a fixture that was discussed a few weeks ago comes to fruition. Stay tuned!