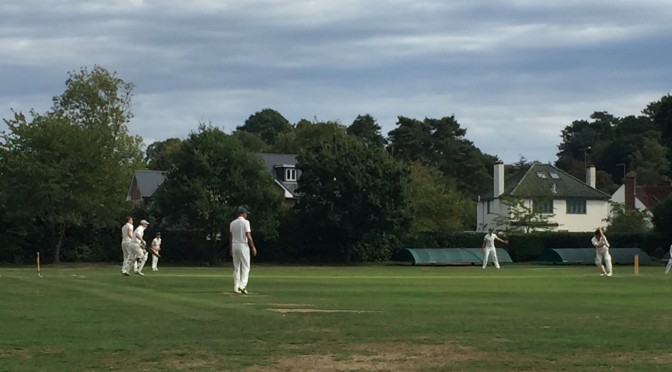 With the clubs in different divisions in League cricket and the pre-season friendly wiped out by rain it took until mid-September to play a game against our friends and neighbours this year. It was worth the wait, though, as the sides played out an enjoyable match. Stoke took this one deep but the home side timed their run chase well with former Stoker George Depree pulling a six to win to and end his reign as Maori Oxshott’s Sunday skipper.

Peter Phipps took charge of on-field operations and did an excellent job other than denying himself an opportunity, and after the ball nibbled early Malcolm Dickson, (19), and Alistair McMillan, (34), added 44 off the first twelve overs before the former was caught at mid-off trying to go over the top.

Moumer Khara hit the bad ball very hard. He lost McMillan just after the drinks break, but this brought Will Thomson to the crease and he continued his great form. Khara checked out on 37 – leg-before again – but the run rate was now good, Ralph Coleman upping it further by dominating a fourth wicket stand in an all too brief cameo.

This allowed Thomson son and father the chance to bat together; dad seeing son through to 50 before being bowled by Depree for 10. Jeremy Connell, (15 off 9), and Will T then smashed 45 off the last 22 balls to lift the total to 220 for 5; Will’s remarkable weekend ending with an unbeaten 79 from 58 with 14 fours.

After the customary excellent tea, Ben Townsend got Stoke on the board early when Harvey-Samuel guided the second ball of the innings, and his first, to Phipps at slip. Townsend was back to his normal self and deserved more than the solitary wicket in his opening spell.

Shaw and No.3 Thorpe got themselves in and kept Maori Oxshott ahead of the required rate. Phipps tried several bowlers and all did well, but the good pitch and unforgiving short boundaries made for a tough time.

The Thomsons exchanged the keeping gear at drinks and Will got through Thorpe’s defences just shy of what would have been a chanceless half-century to end a stand of 129; but Shaw kept going and found good support from Patel.

Khara slowed things a little and snicked off Shaw for 78, then Harper clubbed a four and a six before somehow finding the keeper who made the catch at leg-slip; and when the returning Townsend, (2 for 37), took a return catch to account for Stephen, Stoke had a sniff at 186 for 5.

The game went as deep as it did as very late call-up Monty Vinall had a first taste of senior cricket. On what would have been a very long afternoon for him he got through four overs at no more than the required innings run-rate; and should be very pleased with his contribution.

With runs running out Will Thomson and Geoff Vinall had one last burst. Vinall snicked off Patel for a well-constructed 39, but there were still 15 balls to get the last nine runs and wickets in hand, one of them Saker who was the ideal man for the job.

The field was up, but Depree took this out of the equation by pulling a Thomson bumper over mid-wicket to end a terrific match played in front of a decent crowd including much appreciated vocal away support from the Morgans.

As is always the case between the two sides, we all had fun and we’ll do it all again next year.

Next week we have two Sunday fixtures in the card so we’ll need everyone! Availabilities in ASAP please so we can manage the oppositions’ expectations and map out two balanced teams.