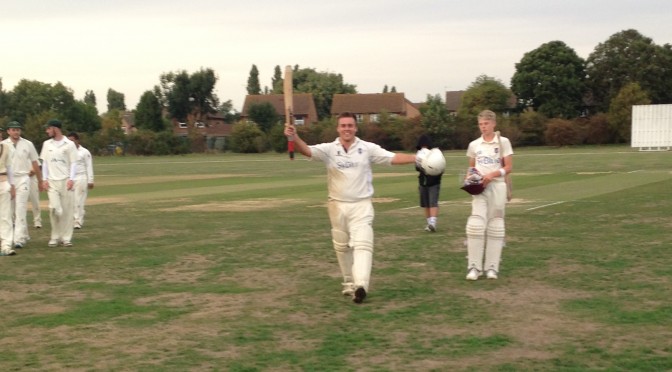 A great all-round individual performance from Will Thomson that included a maiden century wasn’t quite enough to score a win at Ashford who kindly offered us the fixture in the week after their original opposition never confirmed the fixture.

Ashford advised that they were a mix of 1s/2s/3s and we had more of a 2s/Sunday feel, not that it was a side without ability, but the sensible decision for Stoke to field first was reached at the toss despite more than a few punctuality issues on the Stoke side that saw one player go to the Ashford CC in Kent despite being given the correct post code. Thanks to Ashford CC (Surrey) for lending us a couple of fielders for the first few overs to get the game going.

Duncan Elder made an early breakthrough when the jovial home umpire gave Evans out leg-before; but this was rare joy as League players I.Rao, Mahmood and Malik played their shots and made full use of the extra gaps caused by the shortage of a fielder.

Tom Dennis slowed things down a bit with some good overs; and Rory Harris showed continued growth in his early Stoke career when he got a ball to lift that Rao Snr, (34), who could only glove to keeper Raja Singh who did a great job. Unlike two Sundays ago where the same thing happened, this time he got the decision.

Mahmood looked set for a big score but checked out on 55 courtesy of a stinging catch at mid-wicket by Aydin Huseyin off debutant Mo Kashif. Despite the lack of appropriate footwear Kashif was an effective bowler either side of drinks, and a great effort for him to travel from Acton to play. Our reputation of providing a good experience continues to spread wider!

The wicket prompted early drinks with Ashford in a good position at 131 for 3; but Stoke kept going and got their reward when Thomson picked up four quick wickets that sandwiched a run-out by Harris who showed good awareness to get the ball in to the right end. 154 for 7 and Stoke, now at a full complement in the field after Khalid Harris jumped in the car and charged down from Battersea knowing the earlier mentioned player was more likely to go home rather than visit as many places called Ashford, were in the game.

Back to the cricket, Rory Harris earned a second spell that saw him castle Malik for 65, (he finished with commendable figures of 6-0-28-2); Ben Townsend and Elder bowled well at the death; Elder, (7.3-2-24-2), bent back the home skipper’s off stump to close the innings on 214 in the penultimate over.

After an excellent tea Stoke knocked off 17 of the required runs in the second over as a younger Rao struggled with his length, but he would return later and bowl well. Spelled after an over; League bowlers Wilson and Tilt slowed things down, and the latter picked up the wickets of Dennis, then Singh to a very sharp stumping, in a miserly opening spell of 5-3-2-2.

Thomson and Khalid Harris kept the board moving despite more good bowlers coming on; and just as things started to look good for Stoke Harris, (16), fell to a good slip catch, then Huseyin was castled in the first over after drinks for 10 having played a couple of nice shots.

With a couple of unknown quantities down the order, Kevin Morgan stayed with Thomson to take the game as deep as possible. Thomson scored most of a fifth wicket stand of 43; but the pair set the game up nicely with 75 needed off the last ten at the point of Morgan’s dismissal, held at short third man. Kashif was stumped going for it from the off.

At this point Ashford’s excellent facilities worked to Stoke’s disadvantage. With the individual scores on display on the board, Thomson, having passed a career best, seemed to be caught between personal and team glory. Had his score not been visible he might have carried on playing the way he had to reach 92, (off 79), but then another 31 balls were faced to reach the hundred, brought up with arguably his best shot, an imperious cover drive with the field up.

Elder, (16 from 13), kept Stoke in the hunt; and century bagged, Thomson then found his earlier gears and clubbed 30 off the next fourteen balls he faced to get the equation back to 22 off the last over. He and Ben Townsend ran unselfishly and often crazily in the closing overs to try and secure the win, that only became impossible with a couple of balls to go, the last of which saw Thomson caught on the line at cow for 133 off 124, (24×4, 2×6), with Stoke ten short of victory or nine for a tie.

A great game played in a tremendous spirit. Hopefully we can make this a permanent fixture going forward as there was a shared view on how the game should be played and lots of interesting stories to tell each other from our respective league and T20 Cup campaigns.

We’ll see where we are with numbers for next Saturday, but with two Sunday fixtures in the card for next weekend, please advise ASAP if you can help with an appearance to make both those games happen.