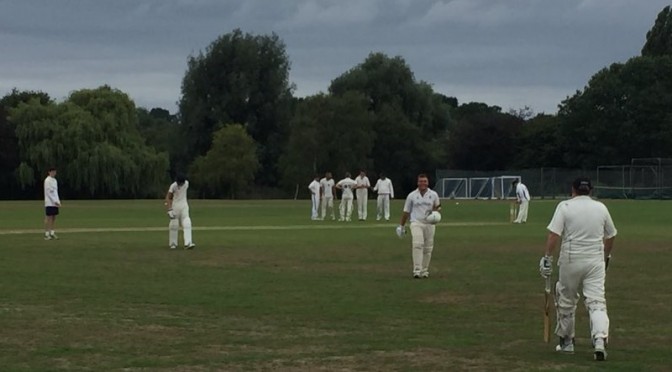 Both sides were rewarded for giving it a go and got in a fun game that, although ended in defeat for Stoke, gave the younger players more valuable experience in adult cricket and the older ones time in the middle.

With a bit of weather around agreement was reached to play a over match in case time was lost. As it turned out we played through without interruption and could have easily got in 80-90 overs, possibly more.

With Byfleet’s concession of the scheduled Trust League fixture the Sunday XI received a nice feed from the Trust squad; Alex Clinton took charge and had a good day. After a few delays – mostly down to the home side who had a few latecomers who played rain cards and had to make a dash to the ground – play started 36 minutes later than scheduled with Stoke asked to bat.

On a pitch that did quite a bit Hamza Hafeez could do little other than glove one that leapt at him, but Moumer Khara took the pitch out of the equation and hit the ball cleanly for his 27 before he was out leg before.

First change Niazi started with a horrible wide but this was clearly a master plan as the remainder of his first four over spell was very destructive. He castled Jason Howard, (great to hive him back in the fold and he also kept well later), and Teague Clarke, the latter with an unplayable; and when League player Hussain took out Patrick O’Neill and Max Dunn in the space of four balls – the ball that got Dunn would have got out many batsmen – Stoke were in a spot of bother at 61 for 6.

Clinton and Will Thomson more than re-built the innings with an excellent stand of 73 in under nine overs. Clinton played nice shots all around the wicket and Thomson cashed in on anything errant. Just as the possibility of a score nearer 180-200 looked on the captain was lost to a run out having looked in no trouble during his knock of 28 from 35.

As opportunities were given the lesser bowlers Thomson reached his half century from 30 balls, then moved to a career best 79 from 48 before the returning Niazi, (5-3-15-4), yorked him off the penultimate ball of the innings, negotiated with aplomb by Geoff Vinall. There was time for debutant Rory Harris to start his Stoke career with a red inker.

A pre-game decision to turn straight round in case the weather came in meant a change to the planned opening bowling pairing. One given permission to go “quickly” to a local shop then took an age to saunter back and missed his slot.

Instead Vinall opened up and delivered three tidy overs. Clarke bowled well without luck at the other end; but League 1s player Hussain hit the rare bad balls – and some good ones too – to unusual areas; Dunn was unfortunate to bowl at him when he was in full flow, but there were some snorting deliveries in his opening over that drew praise from the home players.

Harris got his first bowl and after a nervous start got Stoke on the board with a successful lbw appeal. He gained confidence from this and bowled another good over before ending with a tired one. Promising start, though, and thanks to Tim Handel for putting him on to us. The raw materials are there.

O’Neill was into the attack at the other end and sent down five overs that challenged the batsmen. He got his reward when Hussain, (48), smashed one to mid-on and Clarke took a very good catch – to say the ball was travelling was an understatement. O’Neill’s figures of 5-1-15-1 were a true reflection of his control.

88 for 2 was soon 93 for 3 when Clinton attacked the ball hard to effect a run-out off Khara’s first ball; but in hindsight this didn’t help as Ks 1s League player and all-time leading run scorer Khalid was up next and helped himself to quickfire half-century.

He lost only one partner, Robinson who was bowled by Khara, and walked off unbeaten on 64 with seven fours and four sixes; home skipper Patra, (12 not out), was also there when the winning hit was made with the best part of five overs to spare.

Defeat, but we will gain in the long run as a result of playing these games, so well done to all for turning out and supporting this fixture. Thanks also to Kingstonian for offering us the game and sharing a common determination to make this happen. Note to Kevin Morgan – they are also keen on an Over 40s match next year as well.