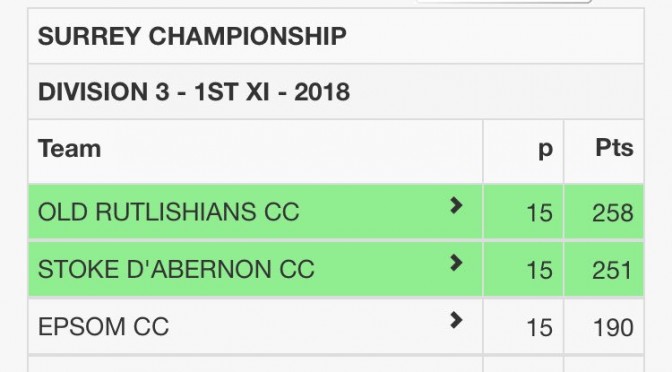 Victory over Streatham & Marlborough and a surprise defeat by Epsom to relegation threatened Purley saw Stoke secure a third promotion in as many seasons.

Tremendous work by the ground staff in the week following the rain produced a playable surface; the umpires asking for a delayed start of 15 minutes to let things dry a little more.

Stoke were inserted after the visiting skipper called correctly but looked set for a big total as the first three bowlers struggled with their lines, 23 wides coming in the first nine overs and 97 runs scored in total off the first 14. With the bat, James Trower and Tim Handel added 91 for the second wicket in just over 10 overs.

Back from injury Handel hit the ball cleanly and selectively. He hit five sixes in his knock of 56 but still scored fewer runs than balls faced, showing the necessary defence against the moving ball. His only blemish was to call through his captain, who had looked in little trouble in reaching 26, seven of them scored off a pair of free hits, for a single and heard him lost to a run out at the keeper’s end.

Handel and Shawn Dyson moved the total to 125 before the former was held on the line – good footwork by the fielder to keep himself inbounds – and after that all the batsmen got starts but for once runs down the order weren’t forthcoming.

Dyson, (24), fell to a great catch diving forward by Davis to give Singh, (10-4-19-1), a deserved wicket; thereafter no other batsman made more than 17 as Stoke were bowled out for 203 with 5.1 overs of their allocation remaining – that would have come against two of the aforementioned erratic opening three bowlers. 37 extras including 29 wides was a significant contribution to the cause.

Rao, (3 for 27), and Davis, (3 for 60), were the most successful bowlers; keeper Knott recorded four dismissals in a short space of time including two very sharp stumpings.

After tea Stoke pressed for early wickets and got one in the first over when Knott turned for a second, appeared to lock up on his way back and was beaten by a rocket of a throw into Will Thomson’s gloves from Alastair Curran. 5 for 1 was soon 9 for 2 when Toby Tarrant had a leg before appeal against Pickles upheld.

Tarrant and Robbie Blackburn continued to run in hard, backed up by an expectant cordon – nothing went through James Corbishley at backward point either – and took another wicket each to check the visitors’ progress. Tarrant cleaned up Hobbis for 15, prompting Thomson to beat the batsman to the pavilion in search of a replacement stump; then Ellis fell to a great diving leg-side grab to give Blackburn a deserved entry in the fourth column. 54 for 4.

The second wave of Will Frost and Dyson maintained the necessary scoreboard pressure that told when Vanderpant – who made a half-century in the 2nd XI match on the same ground earlier in the season, most of them through cow – was bowled by Frost attempting something similar. Frost bowled his allocation in one spell and returned figures of 10-1-33-1.

Whilst 69 for 5 looked good for Stoke, opener Steel was batting well and if someone was able to stay with him the target was achievable. He found the necessary support from Rao and the pair ticked off run by run, over by over, and put together a partnership of 81 to get within 54 runs of victory.

Preservation of wickets made the Duckworth Lewis Stern a new factor in the game, and having always been quite a way behind for most of the innings, with ten overs to go Streatham & Marlborough were suddenly only eight runs shy of the target score.

Ian Hopton, (8-0-22-0), had bowled an excellent containing spell; but with eleven overs to go Dyson came back in order to make sure he would bowl his full allocation were the game to go the distance. Steel had earlier planted him for a nice straight six, but when he tried to go over the top again he picked out Blackburn at mid-off and departed for 61.

Rao, (36), assumed the role of senior partner but was gone within a matter of minutes as he gave Max Subba Row the charge and was easily stumped by Thomson to make it 153 for 7. DLS now comfortably back in Stoke’s favour as it started to spit.

Rao’s decision suggested that there might have been a tail, and this proved to be the case as Dyson, (8-0-26-2), and Subba Row, (career best 5.3-0-15-3), took the last three wickets for the addition of just sixteen runs; the last two carbon copies of each other off successive deliveries; st Thomson b Subba Row.

An exciting game played in a good spirit. Credit to the Streatham & Marlborough lads who stayed behind for quite a while despite the distance back to their base; and they were quick to offer their congratulations when moments after the victory song could be heard coming from the changing room whilst the administrators did their thing; an almighty roar followed with news of Epsom’s defeat.

Another promotion for Trower and his men. This time with three games to go, but no time to take the foot off the gas. Three wins would secure the title. One game at a time, though – a trip to Cheam is next. 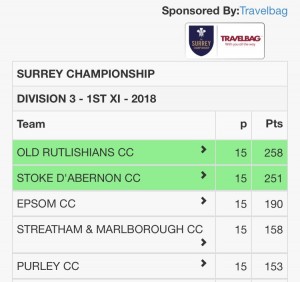