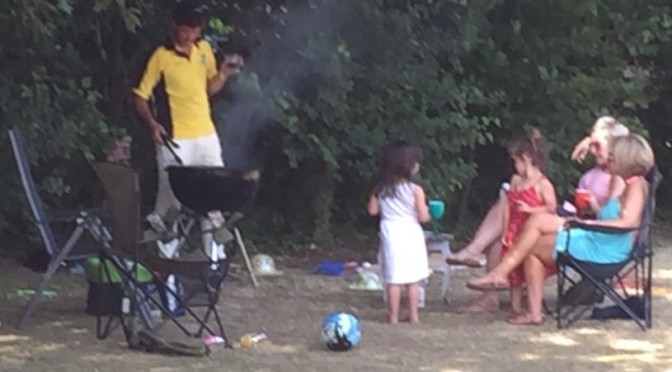 While England were hitting Panama for six in Russia, before the World Cup draw was made last winter the Trust League fixture computer got in first and allocated us fixture at Walton-on-Thames. Will T and the Team Sec worked tirelessly through the week to assemble an XI. Thanks to all those who helped with an appearance – we had no game without you. The opposition had an U21 AND a Development Trust XI team to find(!) and with priority going to the U21 League Stoke faced a team of nine.

What a nine, though, and the opening bowlers maintained impeccable lines, often with just one player on the leg-side. Stoke started poorly having won the toss as Hamza Hafeez was bowled behind his legs by the only ball he faced and Ollie John chased a wide one. 13 for 2.

Scratchy at first, Billy Zander got his feet moving and grew into his innings on dry pitch that did a bit of everything but was good for batting. In partnership with Max Dunn a further 46 runs were added. Dunn hit the match’s only six before perishing later in the thirteenth over for 24. With a bit more patience he looks a terrific prospect. 59 for 3 was soon 73 for 5, though, as Trust League debutant Alex Thomson was stumped, then Zander mis-cued one and departed for 34 just as he was starting to cut loose.

Stoke needed a partnership and got one. Another Trust debutant Carel Ferreira, a late addition to the XI after working out that he could hold his family BBQ at deep mid-off rather than his back garden, joined Will T and added 76 runs in less than 11 overs.

Things were starting to turn Stoke’s way but the Thomson son & father pairing fell in quick succession, the former for a nice 25, then Patrick O’Neill was caught in two minds and served up a return catch to make it 164 for 8.

With just 10 & 11 for company Ferreira became more expansive and was ninth out a boundary short of what would have been a fine half-century. Uddhav, one of four bowlers to take 2-fors, closed the innings when Aydin Huseyin was another to be out c&b, leaving Ben Townsend with another red-inker.

Stoke’s total of 186 included 40 extras, (33 of them wides), and five bonus runs when a ball hit the helmet behind the keeper. Something to bowl at but things could have been so much better had 7.2 overs been used.

After an excellent tea a good decision was made to open with spin from one end. O’Neill was unlucky to see a few go through a vacant 2nd slip area, and keeper-bat Dann added to the frustration as he hit the ball in unusual areas. Eventually he fell with to O’Neill for 16 with a wild hack across the line, but the home side had a platform they wanted at 42-1 and the shortage of batsmen was starting to not become problem for them.

Skipper Christiansen and Simpson batted until the last over before drinks and scored their runs quickly; aided by some very attacking fields, a glass outfield and some indifferent fielding where a number of half and difficult chances were squandered. John’s good running catch off Zander to prompt an early drinks break gave Stoke a much needed lift; but at 108 for 2 wickets was now the only way to win this one.

Zander, John and the returning captain threw everything they could at the batsmen. More half-chances were missed and a run out opportunity went begging with a throw going to the wrong end. Stoke were in the mire at 141 for 2 as a result but a good running catch in the deep by Zander off Will T gave late hope.

In a matter of minutes it was 155 for 5, (technically for 7), as the captain got his second with a return catch, then Townsend got a wicket he deserved – the poor lad has had to put in some hard yards on some very unhelpful pitches in recent games but always keeps going – when Uddhav skied a pull and Ferreira held on to a steepler.

31 runs still needed and one more wicket might have made things interesting; but No.7 Duke hit the ball well and his quick 15, plus some more from Nicholls who was happy to bat through, took the home side to the brink of victory. Duke was a late dismissal when Zander, (7-0-32-2), took a stinging return catch; but the remaining runs were knocked off in the same amount of overs it took Stoke to make theirs.

Having now lost a couple of games that could have been won, wins are needed to qualify for the next stages; but we shortly move into the period of the season where we are at our strongest and we hope to make ground; starting after our bye-week on the 8th July with a return fixture at Horsley & Send.