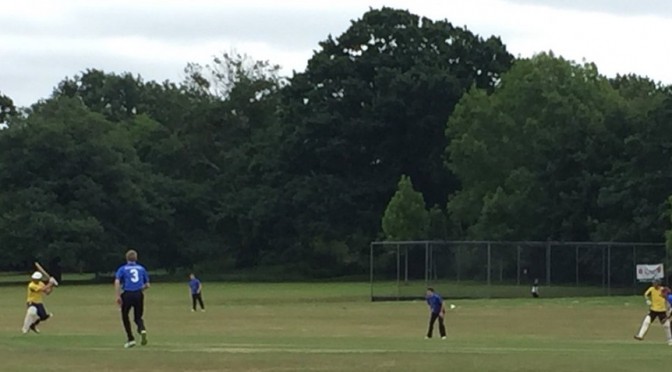 Planning for Sunday took a strange direction this week as having previously e-mailed to say they would not be able to play a Trust League fixture on this date, (copy e-mail available on request!), when contacting the opposition to re-arrange they came back saying they had a team. As people know we play nice and rather than enforce a result we scrambled an XI together, ruining any chance of a Sunday XI friendly for some but paid-up members from that squad were offered the chance. Those who declined or were unable missed out on a tremendous game.

Stoke were asked to bat and despite the early losses of Neil Foster and Alex Clinton, they found themselves in a great position going into the 20th over at 137 for 2; Alastair Curran, (75 from 47), and debutant Hamza Hafeez, (31), added 99 in twelve overs, two of them yielding 28 and 17 as Curran planted the first four balls of the 12th over on to the railway and he cleared the line on the full once more later on. Throw in five fours it was as compelling viewing as Will Gudgeon yesterday, prompting the opposition to bring on their exciting quick prospect S.Hunt, (he of the incredible last over in the recent T20 knockout match), who got his man wicket courtesy of a good catch at square leg by his brother after a mis-timed hook shot. Hafeez, who has always enjoyed his games against Stoke for Old Ruts and Cheam and fancied a run out for us after a nice chat following last Sunday’s match, played well, ran hard and looked in little trouble until he was caught at the wicket.

Curran’s contribution to the match was not just his batting. He managed to whistle up a couple of mates to take the final two spots after the availability/late drop out curse struck again less than an hour before kick-off. Henry Su, (16 runs), and Ed Ball took Stoke past the 150-mark, allowing captain Will Thomson to feast on some inexperienced but promising visiting change bowlers.

The aforementioned quick was summoned back into the attack. Short balls were despatched for four, six and four to reach 52 before he had a stump sent back quite a way. Having done his job – and put in a 14 over shift the previous day in the Championship – he then bowled within himself to Rod Thomson, Aydin Huseyin and Ben Townsend, who lifted the total to 241 for 8. A generous helping of 49 extras formed part of this total.

After tea Townsend and Thomson Jnr found little assistance from the pitch and the openers got the good start they needed. 30 for 0 off three was soon 30 for 1, though, as Thomson took a wicket in an identical manner to last week. Townsend bowled well without luck as the next pair added 57.

Pace off the ball was tried to get a breakthrough. It worked. After his obligatory opening pie, Huseyin settled into his work and forced Stewart, (36), to mis-time one to Su in the covers; Barber was despatched leg before next ball; and just before drinks Horstead spooned one to Hafeez at short third man. 95 for 4.

Opener Hafiz had played well for his 42, (a personal best), but became the next man to go when Clinton took a good catch over his shoulder on the circle to give Huseyin final figures of 7-1-21-4; but Stoke found another breakthrough hard to find. Horsley & Send chipped away at the target and their 1st XI captain – dropped at the wicket first ball and then on the circle an over or so later, (both difficult chances, mind) – made a quick 31 off 20 balls including one of the biggest sixes you will see this year.

Townsend, who is already becoming a go to man for all the captains he plays for was summed for one final effort and got a deserved wicket when he took a return catch. His presence of mind for one so young to work out where to bowl to such a formidable opponent and force his error augurs well for his and our future. 185 for 6 and if there was a tail, surely Stoke had broken the back of things…if…

No.6 Collett had other ideas and scored very quickly, making a career best 69 from 64 balls that looked to be turning the match his team’s way. Hafeez picked up his first wicket for the Club courtesy of a good catch at point by Ball to remove Stewart cheaply; but Collett found a partner able to stay with him in Coppen and at 228 for 7 Stoke were running out of runs to play with. Coppen edged Hafeez to Foster for 12; but ominously Collett was still there.

Having got the required runs down to ten, though, the retuning captain found his edge leaving the last pair an over and a bit to find the rest. Suddenly run-rate was an issue again. A mow over cow to start the final over kept things very interesting but as the last man struggled to get the ball away, attempts to steal a bye to Foster were unsuccessful, the ball being thrown back to bowler Hafeez who effected a run-out to complete a five run win.

What a game, seen by the President who also kindly umpired for us, and it was shame someone had to lose…in a way no-one did though as Horsley & Send took the points for playing with an eligible team by rule, and Stoke completed an unbeaten weekend in senior cricket with a narrow win.

The Academy are back in action next weekend when they travel to Walton-on-Thames. Availabilities in ASAP, please!