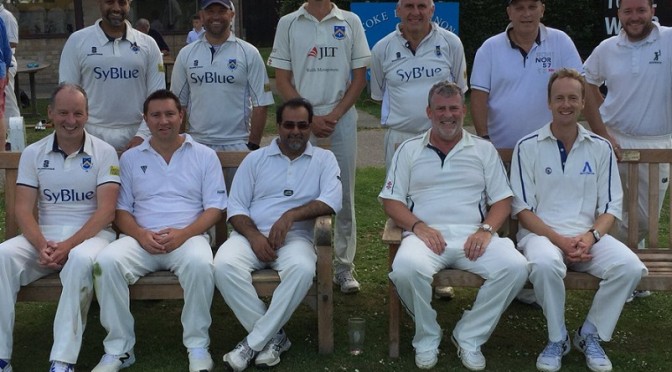 What is it about T20 matches at Stoke this year? With the boffins at CricInfo looking into our seemingly unique Surrey Championship T20 win against Horsley & Send in May, (http://www.stokecc.co.uk/2018/05/25/t20-win-over-horsley-send-on-cricinfos-radar/), they’ll be at it again to see if a side has ever won a match with three sixes off the last three balls…and before you ask, remember that Ben Stokes wasn’t hit for all those sixes off the last four balls of that World T20 Final…and he had 19 runs to play with. Stoke needed 24 off the last over of this one.

The forecast of poor weather was completely incorrect, the sides began in lovely evening sunshine and finished in still very playable conditions negating the need for umpire Will Thomson to source a light meter or Duckworth Lewis chart/app – instead his efforts were directed to a recruitment drive for Sunday’s Trust League fixture. Mission not accomplished if anyone wants to play.

Electing to bat first on winning the toss Weybridge’s openers plundered 70 runs off the first nine overs with some clean ball-striking; notably by Ferris who got most of them before losing opening partner Miles for 15 to a very good catch by Andrew Klimcke in the deep off Donovan Hall, (it was actually an excellent catch but we’ll rate it as very good when you read on); then Ferris checked out on 56 to the same bowler in the over after completing his fifty; Deepak Malhotra effecting an easy stumping off a former Stoke 1st XI opening fast bowler who finished with 2 for 18 from his four overs of spin.

The change bowlers did well without luck on a good batting pitch. Debutant Smith and South African Rugby World Cup winner Skinstad, (https://en.wikipedia.org/wiki/Bobby_Skinstad – cue a star-struck Hopton & Dyson when they realised he was on the ground and ended their coaching early for the evening), moved Weybridge to an ominous 155 for 2 with 20 balls to go. From this point Stoke finally got reward for their efforts.

Having taken a ridiculous one-handed catch on the line only to land on the whitewash, Justin Jones took two extremely good legitimate catches in a similar part of the parish soon after to take out Skinstad, (28), and Smith, (35), off successive balls delivered by Harry Nawaz, (2 for 22); the second in particular was a nice running effort with the added skill and presence of mind to keep himself in bounds.

Geoff Vinall collected the wicket of Oli Slipper for a very shiny golden courtesy of another good catch in the deep by Klimcke; then Rod Thomson castled Burgess in his only over to force a mini-collapse from 155 for 2 to 166 for 6. Ten runs off the last nudged Weybridge up to a more than decent total of 176 for 5.

Aided by some extras, openers Jones and Fraser Slater added 29 in three overs before the latter was lost to a very good grab in the cordon. Jones, Hall – and Extras – lifted the total to 84 when Hall, (14), was lost to a stumping.

Another to make 14 was Malhotra who found the fence three times – the first a lovely straight drive – before falling to a worldy of a catch; and with Nawaz giving opportunities to others with the bat ahead of more experienced league cricketers like himself Stoke found themselves a little behind on the WASP on 100 for 3 at the end of the 13th over.

Jones continued to accumulate runs at the effective rate, but good field placements meant a number of shots he drilled into the outfield only led to singles. Help other than the continued flow of extras was needed, and came via a more unlikely source in the form of Match Manager Kevin Morgan.

Kev has benefitted most from the excellent Tuesday sessions run for the squad by coach Tim Handel, and you would not have known that he has so few Stoke caps given the quality of his batting, and the added pressure of becoming the senior partner to the arriving Klimcke after Jones holed out for a well-constructed 55.

Morgan and Klimcke did enough to make sure Stoke didn’t require snookers going into the last over; but 24 to win and an experienced left-arm dartist with ball in hand for the last this was too many, surely? Well, here’s how it played out…

19.1 Morgan hits a lovely four that could easily be forgotten given what else happened…
19.2 Single. 19 needed off four…
19.3 Klimcke hacks a four over cow corner, leaving 15 needed off three…
19.4 A six. Keeps the dream alive, we suppose, but let’s face it we are still dreaming…
19.5 Six more. Now things are interesting. Two to tie, (Super Over anyone?), or more to win…
19.6 …FULL PINT! This one lands in a different Post Code region to cue every emotion from joy to disbelief…cue more full pints of the alcoholic variety in the bar afterwards.

So let’s recap and complete things. 27 off the final over to win, Stoke career bests for Morgan, (29 not out), and Klimcke, (34 not out), who left to deserved praise from players and spectators and a record T20 chase by any Stoke XI.

The end to this match was not contrived; lesser bowlers weren’t being given a game here; both sides wanted to win and there were plenty in each side who still had that competitive edge even though their 1st XI careers are now a thing of the past – the match played in a tremendous spirit, though.

More of the same next week, please, when Walton-on-Thames come to the Rec to take on this lot… 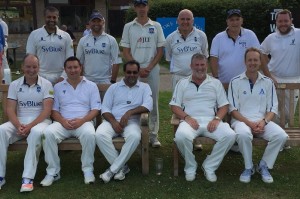