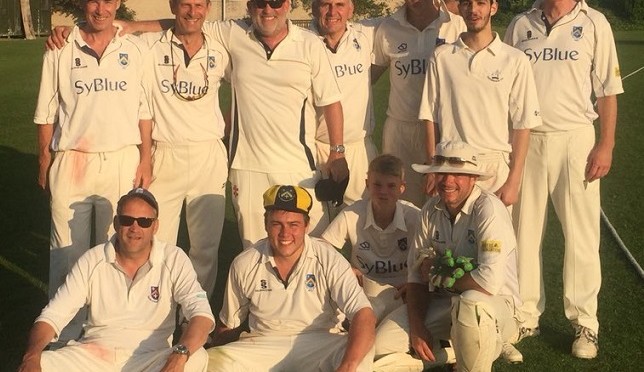 Stoke’s Sunday XI recorded an impressive win at Cheam who were, as ever, welcoming hosts. There was the added bonus of the game being moved to Cheam’s main pitch after their scheduled Development Trust League game against Guildford was scratched by their opposition. Oddly one of their Development XI couldn’t be cajoled into this fixture so we faced a short-handed opposition for the second week running.

Centre stage in front of a decent crowd Alistair McMillan, (57 from 72 in his first outing of the season), and Will Thomson, (68 from 55), added 125 for the 2nd wicket at better than a run ball to put Stoke in a great position at drinks.

Both fell soon after, (137 for 3), but Andy Page and Stephen Finch added another 28 runs. Page hit some nice shots, many straight to fielders, and but for this might have made more than the 13 he did before he was adjudged leg-before.

This brought the Finch brothers together at the crease. Stephen’s straight drive was in good working order, and Chris hit the ball nicely to various parts of the large outfield. The pair were separated when the President, who made 16, fell to a worldy of a catch by Rao on the boundary, made even more remarkable as he was talking to his mate as the ball left the bat and was only aware of the chance when he was yelled at by his team-mates.

Chris Finch and Carel Ferreira, (24 not out from 16), added a quickfire 38 in the closing overs; Finch Jnr out in the penultimate over for 26 from 27; leaving Ben Townsend to run the last ball of the innings through the gap for three to post a total of 226 for 7.

After tea, Townsend bowled good lines on a good batting pitch to restrict the runs, but the fireworks came from the other end as Ferreira’s eventful first over started with him castling opener Butt and ending it by shattering No.3 Varma’s stumps for 4.

Despite this, for the next hour or so we had a real contest. Hafeez, (well known to Stoke from his time at Old Rutlishians and still fondly recalls the Trust games between the two clubs when he was there), and Rao added 104 for the next wicket. Both made half-centuries and prompted Rod Thomson to bowl his most senior bowlers earlier than planned to try and separate them.

Just as the batsmen looked like they had weathered the storm Hafeez, (52), skied a short ball from Will Thomson back to him, and in the next over Townsend took a great running, diving catch to remove Rao for 56. Advantage Stoke.

A sceptical opposition player/scorer suggested that the rest of the order might disappear quite quickly, although Cheam’s league 2nd XI skipper Sayed was still at the crease…but not for long as Rod took his and three other quick wickets with back to back double-wicket maidens to make it 133 for 7; the last courtesy of a stumping by an alert Ferreira who took over keeping duties from Page at drinks.

Opting not to give himself a chance of a first ever 5-wicket haul for the Club, Rod, (3-2-2-4), replaced himself with Geoff Vinall who took the ninth wicket when Aydin Huseyin held a nice catch at backward point; and the match was over a few overs later when an entertaining last wicket stand of 17 was ended when Huseyin tossed one up, Airey tried to hit over the top but Chris Finch moved well to complete the win.

A good performance by Stoke as the opposition had a few League players in their XI to provide a good workout for all ahead of the matches this week; the first being the Over 40s who have their first game of the season on Thursday. Availability to Kevin for that one, please.