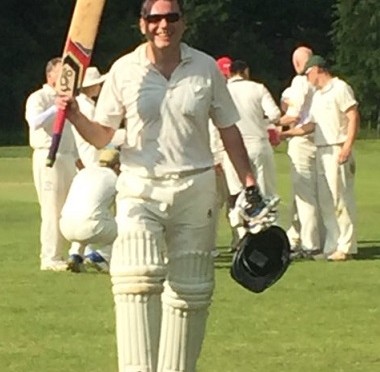 Thanks to Whiteley Village for offering this fixture and then playing it in the way that they did. Poor responses to requests for availability meant we were only able to advertise for a fixture late in the week and by then there were no appropriate home matches were on the boards. The most attractive one left was this local away match, the slight reservation being that it was against an opposition who had set themselves up to play a League game and had Walton-on-Thames 1s players – including their Overseas – who had lost their Sunday league opposition, and we all know what happened at Byfleet last year when we stepped in in similar circumstances. Chat ahead of the match and at the toss about relative strengths led to the Stoke XI fielding first.

The hosts went off like a train despite a good opening spell from Ben Townsend who was unlucky to see the final number in his third column nearly doubled courtesy of edges through the cordon. Roberts and Razey, who were in the Walton Trust team that faced Stoke last Sunday, added 73 in 12.4 overs.

Moumer Khara, (4-0-15-2), slowed things with two wickets ahead of the drinks break. Starved of the strike Roberts, (17), was well caught at mid-on by Townsend then Walton’s Overseas Botha hit a return catch trying to get off the mark.

Razey and Beck added another 45 as opportunities were given to other bowlers; but it was the returning Townsend who struck next, castling Razey for 61. Huseyin yorked Chauhan for 13, Townsend, (8-0-41-2), re-arranged Shambler’s furniture for the same score in his final over, then Huseyin moved quickly to effect the run out of Muddar for a duck.

It was 163 for 6 but Beck – who plays his Saturday League cricket at East Molesey – was playing well and home skipper Connolly stayed with him to add another 24 runs. As overs started to run out Deepak Malhotra was given the ball and ended the innings with two wickets in two balls. Connolly was caught on the circle by Townsend, the batsmen crossed and Beck, who reached 50 earlier in the over, was caught by Khara at mid-off.

187 with nine men – three never made it and the home scorer got a late call-up – represented a good effort by the home side on a sluggish pitch, equally all the Stoke bowlers stuck to their task given the heat and the strength of the opposition.

After tea Malhotra was an early casualty when he was bowled by Roberts Snr via a combination of everything, mostly both his pads; but Neil Foster and Khara got the Krypton Factor scoreboard moving; Foster making full use of a lot of short & wide stuff sent his way. At one point he had made 47 of the first 51 scored.

His contribution as a percentage of the total reduced over the next few overs, but he equalled his highest Stoke score of 61, (from 57 balls faced with 11 fours), before being stumped on the last ball before drinks with the total on 83.

With Stoke ahead of the rate, Village introduced ‘their’ better bowlers. Beck castled Roddy Kelso, then Botha, who swung the ball a long way – and late – castled three Stokers; Stephen Finch offering no shot, then Khara, (33), through the gate and then debutant Tommy Fischer for a third-baller.

These wickets were split by the loss of Rod Thomson to a stumping, and at 117 for 7 it was looking like the Sunday XI were joining in with the trend that seems to have swept through the Club this year…the collapse…time for Jase Earl to take his leave after coming along to cheer the team on.

But Stoke still had Will Thomson at the crease; and in Huseyin, Townsend and last man Geoff Vinall he found the necessary support to take the game deep and give the hosts more than something to think about. A 22-run 8th wicket stand, ended when Huseyin became Botha’s fourth scalp, was followed by a 30-run partnership for the 9th with Townsend – who clipped a nice four during his stay before becoming the seventh batsman to be bowled, (so with the other two stumped no Stoker was caught or leg before!), leaving the last pair 21 balls to get another 18.

Vinall spanked the first ball he faced for four, but with Village’s League bowlers still having overs left, they were reintroduced. Vinall, who was to face 14 of the last 21 balls, and Thomson chipped away at the target to the point that Botha was tasked with the last over with only six runs to play with. He used all his skill to concede just a single to Vinall, (13 not out), to close out a win that, whilst predictable at the point the fixture was booked, was much closer than anyone could have imagined and made for great viewing. Will Thomson walked off unbeaten on 41 from 51.

After some blow-outs in the last few weeks, a game like this was much needed for the Sunday XI, and the chat in the bar afterwards was very optimistic for next week.