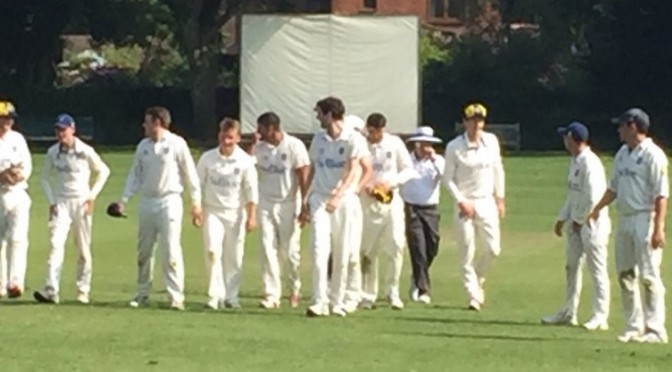 Exam time around the country for many, including the Club Captain, but anyone looking for a model answer on how to defend a below par total should have come to Churt’s picturesque ground for this one.

The rains towards the end of the week meant the covers revealed a damp track when they were taken off, but play started on time in glorious weather, Stoke being asked to bat after acting captain Ian Hopton called incorrectly.

Billy Zander was an early departure when taken at gully: but Adrian Taylor and James O’Gorman showed all their skill against the moving ball and added 51 in 12.2 overs to move the score to 75 for 1. Both were severe on anything off-line, O’Gorman hitting two sixes into the hedges prompting lengthy delays due to a lack of spare match balls, and he also pinned the square-leg umpire with a ferocious sweep against off-spinner Marshall. Taylor reached 27 despite going through periods without strike but fell to Marshall when struck on the back leg.

The pitch spun from the outset and Marshall chipped away at the Stoke order. O’Gorman checked out on 43 from 48 when he edged to slip, Tom Frost turned one to short leg, and with men around the bat Robbie Blackburn was run out by some good work by mid-on as he pushed off for what would have been his first run. 90 for 5 was soon 97 for 6 when Shawn Dyson chopped on one that grubbed, suggesting that this wasn’t such a bad toss to lose if a total of any substance could be posted.

Hopton and Roddy Kelso added 31 priceless runs as Marshall and newbie Osner – whose action was very reminiscent of former South African International Paul Adams – twirled away. Marshall, (10-1-44-5), completed his spell with the wicket of Hopton whose 17 included two sixes and a four. Tom Dennis departed soon after in similar circumstances to Frost.

Having been shot out in just 37.3 overs there was an awkward session for the Churt order to face before tea. Stoke made the most of it.

The first ball of the innings went for four, but the next 47 legitimate deliveries yielded just two runs off the bat courtesy of an edge through slip. Will Frost started things when he bowled Saint for a duck in his first over; Robbie Blackburn found D.Higgins’ inside edge – Tom Frost doing the rest – no byes for the third game running – and 8 for 2 after 8 overs was improved to 14 for 3 after 10.4 as Gyde tried to relieve pressure by hitting Hopton over the top but could only find Blackburn at mid-on. Frost tucked into an excellent Churt tea with figures of 5-4-2-1 to his name.

The shortened tea-break gave Churt some thinking time, and although it looked like a plan had been hatched when they re-took their guards, they continued to be suffocated by an accurate and enthusiastic bowling attack and a committed fielding effort.

Finneran dug in while Osner played more aggressively, but Hopton picked them both up in successive overs. Finneran, who took 54 balls to make 19, was leg before. Osner, (17), hit two nice sixes before perishing to a good catch by Dennis at cover attempting another.

With the lower order exposed Dyson eased into his work, (replacing Frost who returned figures of 8-5-13-1), and took out A.Higgins for a duck. He was joined in the attack by Zander and the pair shared the last five wickets to fall.

Zander struck in his first over when Chhabra mis-cued a sweep to Alex Bond; Dyson took a second courtesy of a catch by Hopton to remove Marshall – surprisingly not coming in until No.8 – and despite some aggression from English and Talbot who scored 10 and 12 from 9 and 12 balls respectively, high catches by O’Gorman off Zander, (2 for 15), and Hopton off Dyson, (3 for 30), for a second time closed out a 38 run win.

All five bowlers thrown the ball took wickets, others who could have bowled too were fully supportive of the match situation meaning they were unlikely to get a turn and were tigers in the field. Much momentum should be taken from this into next week’s match against Epsom who seem to be ticking over nicely despite currently having a points deduction to handicap their attempt to make a return to Division 2 at the first attempt.