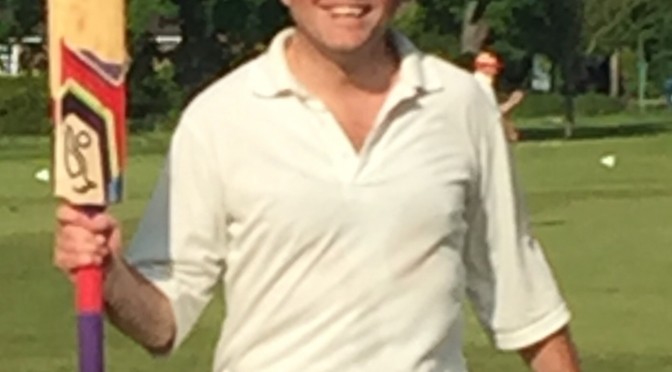 Stoke made very short work of a Richmond Nomads side who made a curious decision to choose to bat despite midweek discussions about relative strengths and the result of last year’s emergency fixture.

Stoke’s bowlers did their job, though. A classic Adrian Mills dismissal to account for Cole who steered an away swinger to Chris Finch at slip for a duck got the ball rolling; then Ben Townsend found No.3 N.Swain’s edge before castling opener Singh.

The batsmen continued to show little aptitude for building an innings and with better fielding the opposition would have been in a worse state than the 30 for 3 they found themselves in. Jeremy Connell bowled Sidhu for a duck attempting a wild hack to cow corner – a popular scoring area for most of the team – and when Malcolm Dickson threw the stumps down to account for Kachawa for 21 it was already looking like a short afternoon at 49 for 5.

A couple of missed chances resulted in a sixth wicket partnership of 40 between Gupta and R.Swain, but both fell to Carel Ferreira who tripled his tally of career wickets for the Club in his three overs. Gupta had made the innings’ top score of 32 before being bowled pulling across the line at a short-ish ball; then R.Swain fell to a spectacular one-handed catch in the deep by Rod Thomson.

After drinks Townsend returned to the attack and ended his allocation with a rocket that bent back the other M.Singh’s middle stump – figures of 8-0-24-3 were a true reflection of how well he bowled – and there was just enough time for Thomson and Chris Finch to get in an over each, both taking a wicket to close the innings on 117 in just 28 overs.

After a well received tea Neil Foster and Dickson made a rapid start to the chase courtesy of some inconsistent bowling that served up a number of boundary hitting opportunities. Two relatively straightforward chances were offered but neither were taken, and the pair added 95. Foster retired on 61 at better than a run-a-ball having hit a six and one of his eleven fours in the 17th over.

Dickson accumulated a nice unbeaten 38 at the other end and Chris Finch hit the ball well for his unbeaten 14. That was as far down the order as Stoke needed to go – sadly the President TFC’d in his first outing of the season – as victory was completed without the need for a drinks break. With lots of drinking time many of the opposition did make a healthy contribution to the bar in lieu of any more cricket for the spectators to watch.

With a home Trust League game next week we will assess numbers and go for an additional away fixture of we can. Watch this space…