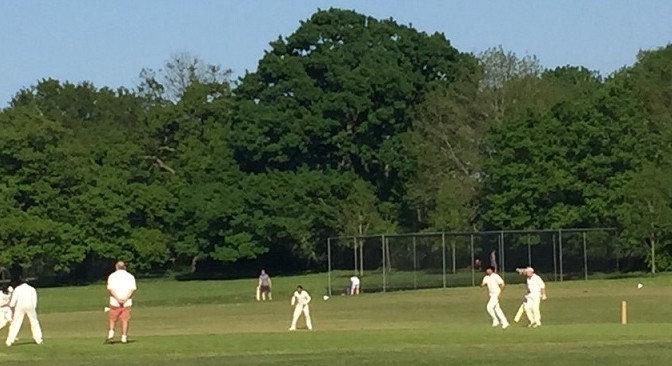 The Sunday XI opened their season with a defeat but the sensible decision to ensure everyone got overs & fielding into their legs and the batsmen time in the middle at the expense of the result was the right one.

Both sides were very keen to bat on a warm day so a contested toss saw Stoke in the field first, the new ball shared by Academy debutants Teague Clarke and Louis Cole; the former a very promising left-armer in the Neil Wagner mould who ran one across opener Majeed who edged to Paddy Wilson at slip resulting in a very sharp reaction catch. Cole also did well despite being the victim of some decidedly harsh leg-side wide calls from the player umpires.

Short spells were the order of the day given the heat that saw two drinks breaks; Geoff Vinall and Sameer Khara taking their turn next; the latter collecting a wicket at the end of a nervy first over when Sanjay hit to Cole at mid-on. 50 for 2 at the end of the 11th.

A third wicket partnership of 29 was broken by Alex Clinton who bowled opener Sultan for 33. This brought Khan to the crease and he was by far the most fluent of the batsmen, striking five fours before falling for 27 to an outstanding running catch in the deep by Cole off the bowling of Moumer Khara.

No.4 Cooper dealt almost exclusively in singles, and lost three partners as he batted through to the completion of the innings on 41 not out. Visiting captain Harris was bowled by Carel Ferreira – a first wicket for the Club in his fifth season, albeit it was a rare turn with the ball – Khara Jnr effected a comedy run-out to remove McRae, and Jeremy Connell collected a wicket at the death when Hussain was bowled.

The innings closed on 168 for 7, a total boosted by 28 extras including a number of wides that, yes, might have been so in a League game, but less so on a Sunday. Neil Foster kept well given the number of balls that kept low.

After a mega tea by Jo, Stoke started the chase badly but this owed much to the misfortune of coming up against a very impressive opening bowler in Khan who castled Malcolm Dickson, Connell and Foster in the space of 13 balls.

Clinton had the choice of which part of the parish to park first change Hussain’s loosener, but only succeeded in toe-ending it to the man on the circle; and when Clarke and Rod Thomson fell in successive overs the scoreboard showed a rather ugly 39 for 6. 17 of these runs were scored by Clarke who played the shot of the day, leaning on one from Khan that went all the way along the ground and rebounded back to the bowler off the sightscreen wheel.

Respectability was restored by Moumer Khara and Ferreira who added 36; the former making 28 of them in his usual belligerent style. Ferreira then went through the gears. He lost Wilson, (83 for 8), but Vinall stayed with him to take the total well past the hundred mark. Both struck the ball cleanly despite the surprise reintroduction of Khan when the game started to look a bit more exciting in front of a decent crowd. Thanks as always to the members of the 1st XI who came to cheer the team on.

Vinall, (12), holed out on the line as the asking rate approached a run-a-ball, and moments later the match ended when Ferreira, who made the innings’ top score of 35 with five fours and a six, served up a catch to the man on the circle.

A good workout for all those involved despite the result.

Details of next Sunday’s cricket will follow soon when the weekend availabilities are received.