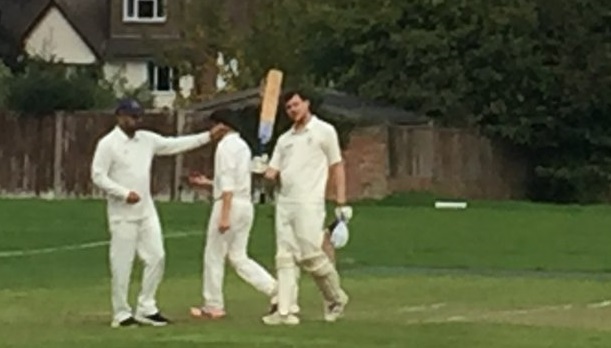 In, (probably), our final match of the season we travelled to Woodmansterne and played out an enjoyable, yet unusually one-sided, match on a lovely September afternoon.

After the mini-footballers cleared the outfield, Moumer Khara and Malcolm Dickson took strike on a soft pitch that had very variable bounce. After clubbing the fifth ball of the match for four, Khara flashed hard at the next and was well caught by the keeper as the ball took off. Minutes later, Adam De Swardt was through a short ball far too early and the keeper moved well to take a catch in the leg-slip/leg-gully region. 9 for 2.

Dickson and debutant Reino Grobler set about batting time and got the scoring rate up to towards the 4 per over mark. Dickson did well with the limited strike afforded to him. He faced just 55 of the 122 balls bowled in the match to the point of his dismissal for 21 on the first ball after the drinks break.

By then the total was 79, 46 of them to Grobler who made full use of anything loose bowled to him, but at the same he protected his wicket and played with soft hands when required. He lost another partner when Jase Earl was out attempting another of his trademark cut shots having got one away two balls previously, and at 89 for 4 Stoke needed another partnership as news came through that last man Drew Birch wasn’t going to make it having got stuck on the M3.

Neil Foster provided good support and another 43 runs were added in just five overs as Grobler became more expansive. Having taken 63 balls for his fifty, (3×4, 3×6), he took on the change bowlers and parked a run of sixes to various parts of the ground, one an incredible punch off the back foot over extra cover that landed on the road on the full and hit the one of the umbrellas in the pub. (For those who don’t know the ground dimensions, this was a very long way would have cleared the railway at Stoke by some distance.)

Foster was bowled for 12 by one that kept low, but Faizan Mirza stayed with Grobler to the point of the completion of his century, from 87 balls, (second fifty off 22), before Grobler checked out on 102, (93 balls, 5×4, 9×6), to a good catch on the mid-wicket boundary.

As the fielders waited for the batsman to pad up after tea, some of the bowlers practiced in a very odd fashion by bouncing the ball to the next man a couple of yards in front of them. Generating such a weird muscle memory then saw a succession of short balls delivered on the field, some wide too, giving an early increment to the total, (extras would eventually top score); but whilst Woodmansterne were up with asking rate early doors, wickets tumbled at an alarming pace; all but two of the batsmen would probably want their shots back.

The first four wickets were shared by Moiz Akhtar, (both catches by De Swardt), and Sameer Khara, (both good catches by Morgan), the latter bowler exempt from any of the above criticism. Khara Jnr was rewarded for a fullish length, and registered by far his best figures, (5-1-15-2), in his short Stoke career. The pair shared the first ten overs that saw the scoreboard showing 37 for 4.

The Woodmansterne batsmen continued to fall to a succession of kamikaze shot selections, but there were a couple of exceptions. The technically good J.Edwards was unlucky to be bowled by one from Mirza that rolled, and later in his first over No.3 Ackland, who fought hard for 12, fell to another good catch by Morgan.

44 for 6 was 44 for 7 in the next over, (just the 13th), when Earl shattered P.Movel’s stumps; but the rest of the match belonged to Mirza who found three more obliging batsmen to give him a career best 2.5-0-5-5, one catch from Earl in the deep and two more in the circle for De Swardt to make four for him on the afternoon, the penultimate one smartly taken in front of his face, the game-ending effort well held diving forward.

Woodmansterne shot themselves out for 49 in just 15.5 overs and there were only two occasions where an incoming batsman was joining an ‘in’ batsman who wasn’t on nought. We can only speculate some of them had somewhere to be.

So a big win to end the season, and a great day for Grobler who we are sure will be a popular addition to the Club next year; fiancée Chandré was also there to cheer him and the team on, and we’re reliably informed that she knows how to keep a scorebook! Welcome to the Club, both!

So if this is the end of the 2017 season on the playing side, (keep an eye on this site and the Twitter feed – https://twitter.com/StokeDabernonCC – that carries a number of pictures from this game – in case we are able to do something next weekend), what a season!!! Thanks to all those who have made themselves available and contributed to each match on and off the pitch, and to those who have helped source players when short to make games happen. See you at the League Dinner on the 6th October if you’re going to that.