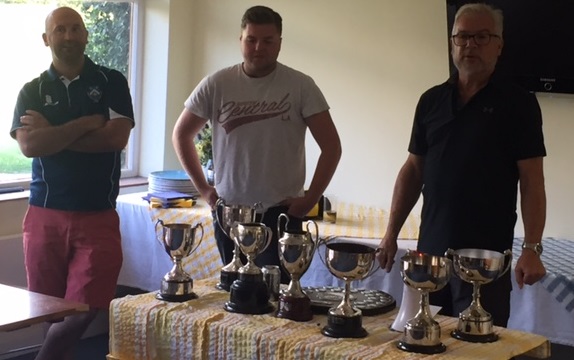 Two weeks ago a large section of Stoke players and supporters were at Ripley to celebrate a 2nd XI win that completed a DOUBLE PROMOTION for both our Saturday League sides.

Thanks to Dick Frost for this picture…

…and to Peter Phipps for this one taken earlier at tea… 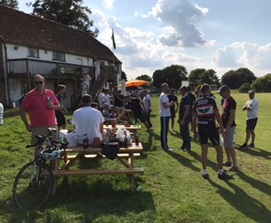 After that is was back to HQ for a beer or ten to talk over the season, eat a tremendous feast prepared by Jo, and to hand out the majority of the senior awards.

First up was the Bob Willis Cup for the most improved player of any age, (a separate award from the Derek Wellman Cup for the best player in the colts section – news on that one will follow from Kevin Morgan soon.) A clear winner was Thomas Dennis. Thomas made a number of important contributions with bat & ball this year – plus a match-winning steepling catch, (showing presence of mind to keep himself inbounds too), to secure a narrow win over Merstham for the 2s. He made his highest score, (69 v Concorde), nearly won us a match on his own against Merrow, (46), and made 29 out of just 101 all out on a tired pitch to help us win a low-scoring game against Richmond Nomads. His bowling improved with a little growth over the winter and at the time injury curtailed his season he had risen to opening the bowling in several 2s League matches. His versatility was also shown with a two crucial wickets as a change bowler to turn the aforementioned Merstham match. He also made one full 1st XI Surrey Championship appearance. 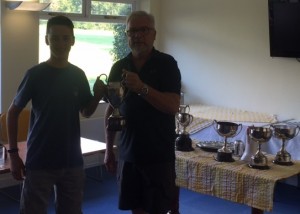 Next up was the Academy/Trust League Player of the Year. In a stop-start campaign in both the Under 21 Trust League and the Under 19 T20 Blast, Alastair Curran not only emerged as the most prolific batsman in terms of runs scored, he made centuries against Wimbledon and Worcester Park, and was also a major contributor with Charlie Hill in sourcing players for the Blast. A worthy winner here, as is everyone named in this article. 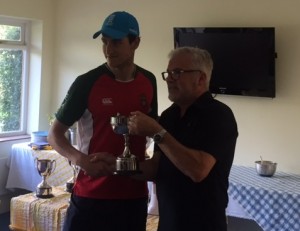 The Hugh Dharmasena Spirit of Cricket Cup was shared this year. Worryingly Toby Tarrant’s unique patter on the field met with a good approval rating from those asked to nominate, and a happy Hoppy received an equal number of nominations. 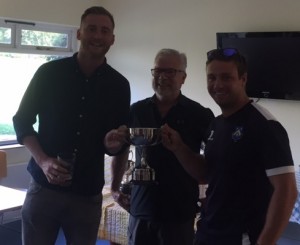 The Vice Presidents’ Shield went to James Trower, (shield already engraved with previous winners Mum & Dad – just Oliver T to go now if we can make him see sense and get him back!), for all the work that he does as Club Captain that many of the players simply don’t see. 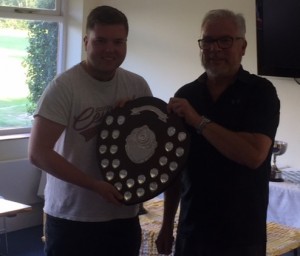 For the individual performance of the season, there were several to choose from. Six centuries were scored; the two by Curran mentioned above, a Sunday XI ton by Ishan Mulchandani, and three from Will Gudgeon, one in the Claygate all-day game, (after edging through slip first ball), and two 1st XI League hundreds, one against the Avorians, nearly pulling off a remarkable run-chase and sharing an all-time Club record 8th wicket stand with Will Frost; and another effort of 114 against Weybridge Vandals, helping the side recover from 48 for 4 to register a total of 274. Shawn Dyson took two five-wicket hauls in 2017, Tarrant, Jase Earl, Dan Gluckman, Billy Zander, Deepak Malhotra, Patrick O’Neill, Paddy Wilson and Roy McMillan also made it on the the 5-fors board; Andy Page, (3ct, 2st), took five keeping dismissals at Ewell.

All things considered, the Will Gudgeon ton at Avorians won the award. 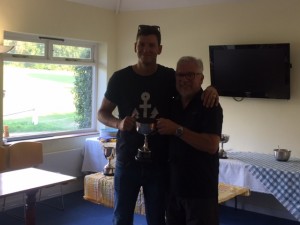 Each year players are asked to vote on who they think has made the best overall contribution, (not necessarily playing, although that normally influences the final vote), to each of the League sides during the season. 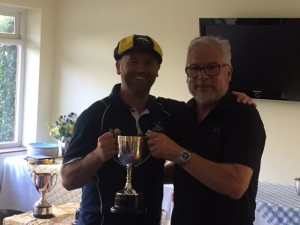 The England Cup for the best overall contribution went to this year’s Overseas, Shawn Dyson, with a more comprehensive majority. 539 League runs, (average 59.89), saw him finish ninth in the aggregates in the Division, but TOP in terms of average. With the ball he took 31 wickets at 15.65 including a wicket with a very first ball and one of two 5-fors in his last game. Despite six bowlers bowling more overs than him, Shawn finished fifth in the division on both wickets and average. Shawn follows James Miller onto the roll of honour to keep the trophy in Western Province hands. 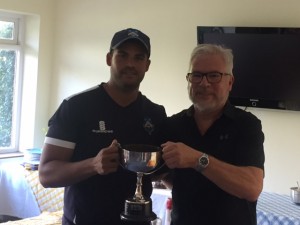 So that left the Player of the Year trophy. With games still to be played Andy Berry, (523 runs), is probably the only player who could realistically pass Shawn’s and Hoppy’s overall aggregates of 559 and 541 runs respectively; although we don’t know if Will Gudgeon, James Trower or Alastair Curran have called time on their seasons. Moumer Khara is available next week.

On the bowling front Hoppy beats Shawn with 38 to 35. Will Frost, (availability unknown), is in range.

But back to the award itself. For being so highly placed on both logs and for the majority of his numbers being in League cricket, Shawn completed the England Cup and Player of the Year double. (We’ll leave any players who go past any of Shawn’s numbers to argue it out with him over the winter!) 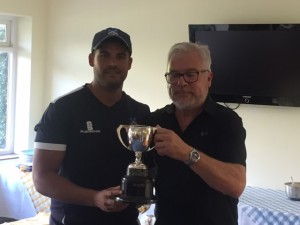 The Honours Board is now updated as follows : http://www.stokecc.co.uk/honours-board/

So with the square now having been re-laid, (see our Twitter page for pictures), we have a few away games to finish things on the playing side before the League Dinner at The Oval on Friday 6th October 2017.

Availability for this and next weekend’s matches needed ASAP, please!