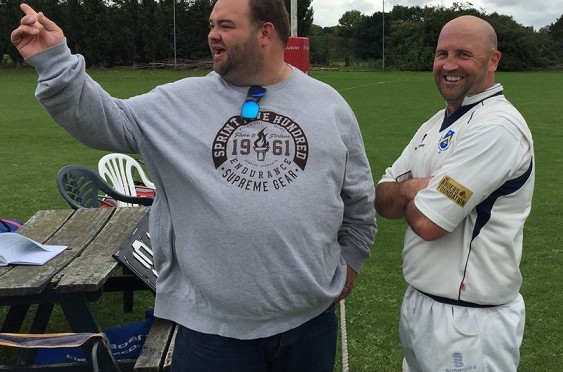 With decent availability for a Sunday fixture Old Wimbledonians were quick to snap us up when we placed our advert and the sides played out a fun game on a cold-ish day, Stoke emerging victorious just as the rains came. Well done to the home captain for getting the forecast just right!

Stoke batted first and a curious first delivery of the match saw Peter Phipps returning with his bat tucked under his arm, a rank long-hop appearing to jump over his bat and land on the stumps as he played back. 0-1 was soon 2-2 in the second over when Malcolm Dickson flashed hard and the keeper held on.

Adam De Swardt and skipper Jase Earl got things going. They initially played some nice shots with little reward as the lush outfield halved the number of runs scored. The pair worked out quickly that hitting the ball hard was the way to go, and added 77 runs in 12.2 overs; De Swardt making 51 of them from 50 balls, pulling away from Earl, (who contributed 20 to the partnership), as he cashed in on a couple of poor overs from the first change bowler.

De Swardt steered a ball to slip, brining Ian Hopton to the crease for his last game of the season. Hoppy started the day in Northampton and was rapidly called up after three players pulled out on the Saturday afternoon, (we got back to ten), and played a couple of nice shots that would probably have gone for four on other grounds before chipping one to mid-wicket.

Rick Mustill joined Earl and the pair moved the total from 98 for 4 to 125 for 5; Earl falling to a good return catch from home skipper Richards for 39 from 66, a personal contribution that took him past Matt Gottschalk on the list of all-time run scorers for the Club.

Mustill Snr was unable to improve his position on the same list, but his nicely constructed 27 from 34 balls brought him nine shy of Chris Finch, but he won’t get a chance to improve his position as next week he has to transport Matt M back to University. Matt M was next and made 11 before losing a couple of partners and then failing to clear the man on the circle as the innings closed on 145 after 33 overs.

Richards, (5-2-8-3), was the most successful bowler, backed up by Tolmie who took 2 for 9. Four other bowlers took a wicket.

The second half of the Stoke innings, (and the first hour of the chase), were watched by Nick Lo who popped in to see both his former clubs on his way to Wales for a bit of business. The big man was in good form and has hinted that he is available next week as his home Club in Suffolk close down immediately after the League programme ends.

The chase started well with 19 runs scored in the first overs, four of them overthrows from Hopton who gave keeper Dickson and the fielders backing up no chance; but wickets for Birthday Boy Adrian Mills, (well caught by Mustill Jnr), and Mustill Jnr himself, got Stoke on the board.

The next batsmen found scoring difficult against accurate new-ball bowling, (Mills 7-3-19-1, M.Mustill 6-1-18-1); setting things up for nicely for Hopton as they needed to go after him as the asking rate climbed. Two batsmen were unsuccessful as Hopton castled L.Hearty, (24), offering no shot, and Marsh for a duck who lost track of a full-toss that dipped late. Hopton, (4-2-3-2), now joins Richie Parrett on 249 career wickets for the Club.

Paddy Wilson took an over to find his range, but settled into a good line and length and got his reward when Thomas, who needed 49 balls to score 7, was another batsmen to be caught failing to clear the circle of fielders, Hopton doing the rest. 51 for 4.

Ralph Coleman had a short burst and collected a couple of wickets to move to 7th on the list of all-time leading wicket-takers for the Club; J.Richards and Jacobs were both bowled, although the second one kept low as it uprooted the off-stump.

Earl and Phipps were the sixth and seventh bowlers used, and they were both in the fourth column meaning every bowler tasted success. Earl took a steepling return catch off his own bowling to remove C.Hearty for 17; Phipps, (2.4-0-5-2), picked up one wicket with a catch on the circle, then closed the innings on 83 with an lbw to complete a 62 run win.

Thanks to the Old Ws for hosting the fixture. They seem keen on a game next year. Let’s see what we can do as we seem to be in demand due to the way we do things. More immediately, numbers look decent to continue the season into next weekend. Availabilities in, (and stay available!), please!