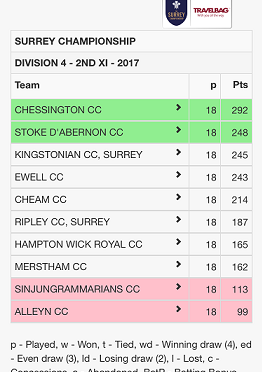 Needing a win to guarantee promotion, Stoke’s 2nd XI did the necessary with another great win at picturesque Ripley.

A bit of moisture on the ground saw Jase Earl choose to field on winning the toss, and he set the tone for the day with a wicket-maiden, S.Cliff cutting to backward point where James Corbishley did the rest.

Duncan Elder made it 26 for 2 when an appeal for a catch at the wicket was answered in the affirmative, Hoggett was unimpressed with the decision but this was probably due to some alleged injustices from last week at Kingstonian. Credit to home skipper Woods for calming him down after he was third out for 22 with the score on 30, Dan Gluckman juggling a catch at mid-on to give Elder his second.

Earl had another short burst and castled Osborne when he offered no shot; then Gluckman and Alex Bond bowled good overs in tandem to the drinks break leaving the home side unsure whether to stick or twist. Gluckman, (8-4-10-1 including a four in his last over), got a deserved wicket when Tom Frost effected a sharp stumping to account for Haider Jamil.

Clover, (20), and Harry Jamil lifted the total from 44 for 5 to 66 for 6 before the former was yorked by Bond off the first delivery of his second spell.

Nico Spreeth tested the batsmen from the other end and made it 87 for 7 when he bowled Naseer through the gate; then with no addition to the score Harry Jamil, who fought hard for his 22 to leave him as Ripley’s highest run-scorer in the League, cut a delivery from Elder to Corbishley who took a good low catch at point.

Tea wasn’t ready so Stoke had a short session. Berry and Alastair Curran knocked off 34 of the required runs in the brief eight over session, six of them over mid-off from Berry’s bat.

A sizeable away support arrived at the interval. It was great to see so many of the 2s squad who weren’t selected support the team anyway, (notably three of the teenagers who helped make this season so special), but numbers were boosted further by the arrival of the 1st XI players who had made incredibly short work of their home match.

Berry and Curran resumed and needed just 10.4 overs to knock off the remaining runs in glorious sunshine. Berry completed a half century, Curran, (29 not out), played with good method despite a bit of chirp from the away ‘support.’

Berry, (58 not out from 50 balls), administered the winning hit with a cut through cover for two to seal PROMOTION! The other contenders for the final promotion place with Chessington did win their games too, but there was nothing they could do.

So a highly eventful 2nd XI season ended with a very positive outcome. We return to Division 3 for the first time since our solitary season there in 2014. An older and wiser side with great back up from younger players who are only going to get better, leaves us well placed for a crack at the higher level next year. 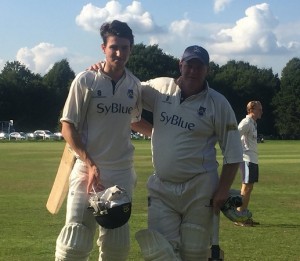