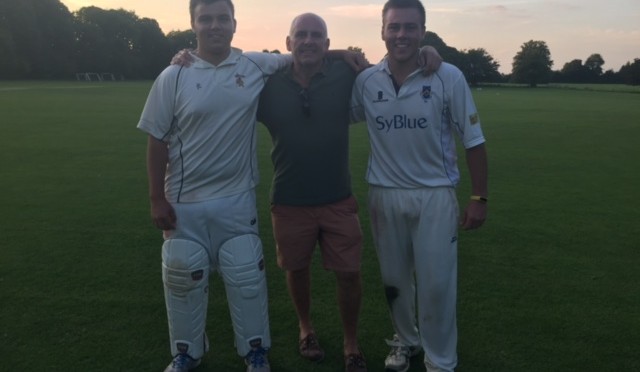 A player drop-out the day before the match and another unable to attend on the day left the Stoke Sunday side with just nine men but the team, well led by Will Thomson who involved everyone, put up a good show against welcoming hosts.

Thomson’s only blemish was to lose the toss on a sticky afternoon, but in new ball partnership with Luke Kirchner he made Woodmansterne’s openers work hard for their runs; Kirchner bowled his allocation in one spell, conceding just 12 runs; Thomson’s opening spell was 6-1-15-0.

The change bowlers did their best but found Houghton, who came into the game with 815 runs already under his belt this season including a century last week, in good touch. He cashed in on anything off-line. One of the change bowlers was debutant Moiz Akhtar who did well in his first long-format match for nearly two years, only a tired couple of overs at the end of his spell spoiling his figures.

The breakthrough came from a more unlikely source. Alex Thomson sent one down to Houghton who pulled hard but Akhtar took a good catch at deep square. That made it 87 for 1, but 24 overs had been bowled; next man out S.Edwards needing 95 balls to make his 32 before he fell to the same fielder/bowler combination.

Rod Thomson and Faizan Mirza received late call-ups for a bowl, and shared five wickets as Woodmansterne lost a few  in the pursuit of quick runs. Rod T returned figures of 4-1-17-3; castling Whyte for 22 and Mulley for 15; then Kirchner took a good low catch a backward point to account for J.Edwards.

Mirza, (3-0-25-2), who is rapidly becoming a golden arm for Stoke, took the wickets of Hyatt and Rayner; catches by Rod and Alex Thomson respectively.

Keen to get all three Thomsons in the fourth column; Will T bowled the final over and took a return catch offered by the home skipper. Just a single from that final over and the innings closed on 174 for 8. No.4 Onainwa couldn’t get the strike and finished 18 not out off 17.

After the typically excellent Woodmansterne tea a new opening batting combination took strike. It lasted one ball as Peter Phipps was bowled first ball; then No.3 Mirza steered the next ball to leg-gully.

Ralph Coleman watched the dismissals from the other end, and in partnership with Neil Foster, (who had kept well on a warm afternoon), started to build a total. The partnership reached 33 by the mid-point of the 12th over when first change Jacobs jagged one back through Foster’s defences.

Jacobs bowled well, notably at the next man in Rod Thomson, and this set things up for young spinner J.Edwards who collected his wicket courtesy of a full toss skied back to him off the last ball before drinks that were taken at 61 for 4.

Will Thomson came in and another good partnership with Coleman, (these two seem to bat well together), doubled the total in good time, leaving 57 needed off the last ten. As the fielders tired and a couple lost interest after a heavy Saturday, Will T hit the ball vary hard and some overthrows were also forced that boosted the total.

An exhausted Coleman finally chipped one to point from the returning Fishlock, checking out on a career best 43 from 75 balls faced. The captain then found good support from Kirchner who made 13 of the next 19 runs including the shot of the day, a four drilled through the covers.

37 were needed off the last six overs; but Jacobs returned to the attack and pushed the asking rate up. Kirchner was leg-before; and having made 47 from 51 balls Will T didn’t clear the man on the circle and the game looked up.

The match was played in an excellent spirit and we’ll look to make this a permanent thing on the Sunday XI calendar in addition to the September friendly that we normally have.

The team is on the road again next week, making the short trip to Thames Ditton.