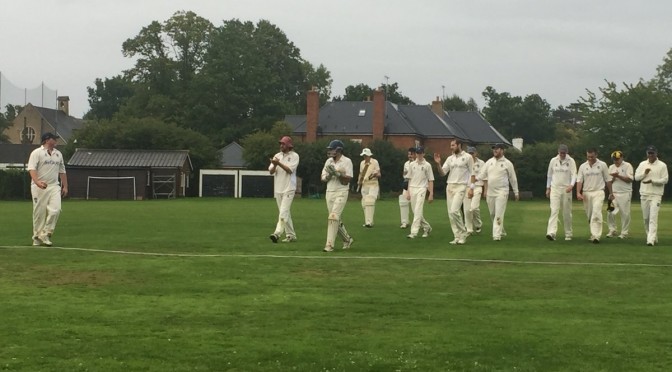 Firstly a thanks to Maori Oxshott for flipping this fixture to theirs to give us the chance of an additional home Sunday fixture. Excellent hospitality as always, and a fun game where both sides played to a finish despite some pretty horrible rain for the last section of the chase.

Will Thomson skippered and continued his formidable record with the coin. Stoke batted first in this 40 over match. Malcolm Dickson and Moumer Khara made good progress from one end; at the other, youngster Edgar-Gibson showed a lot of promise. The result was 37 from the first five overs, although they were pegged back a little by change bowlers, (both former Stokers), Green and Depree.

The partnership reached 81 by the last ball of the 16th over that saw Khara given leg-before for 48. He faced 55 balls for his runs and hit six fours and two sixes.

Dickson’s first two scoring shots were fours and he also hit a maximum of his own; but he and No.3 Neil Foster had to do lot of running due to a lush outfield. The pair added another 76 in 15 overs; Dickson reaching his 30th score of 50 or more for the Club before being stumped for 52 from 80 balls faced.

Foster was the most fluent of the batsmen, hitting six fours and a six in his 56, his highest score for Stoke. Like Dickson he fell to a stumping, although he was the latest to fall victim to one of Hansom’s deliveries that came out of the heavens.

Stephen Finch and Rod Thomson pushed the total towards the 200-mark in the closing overs. Each hit two fours in making 19 and 14 not out respectively, the former holing out in the final over leaving Jeremy Connell a watching brief for the last couple of balls from the non-striker’s end. Stoke closed on 198 for 4.

Anything around 200 can often be made to look a low score with such a small playing area, but Stoke made a good start; Adrian Mills and Richie Parrett conceding just 14 runs in the first six overs between them, Parrett collecting his 249th career wicket along the way when he castled Crooks. A 250th proved elusive – the nearest to it was a filthy long hop resulting in a chance that was probably more runs saved than a dropped chance.

Then followed a passage of play that was all Oxshott, or rather all one Oxshott player. No.3 Ryan moved the scoreboard at a rapid rate, hitting 83 of the next 94 runs scored to the drinks interval, (in one section he faced 17 of the 18 balls bowled and made 27 out of 29.)

At the half-way mark, Oxshott had exactly half of Stoke’s total with nine wickets left. The other opener Patel had made just 10 although he had a low share of the strike.

Things turned in Stoke’s favour two balls after the re-start when Will Thomson brought himself on. He started with a couple of loose half-trackers; the first was missed, the second mis-pulled by Ryan to Dickson at mid-wicket for 83 from 61. (13×4) After his initial difficulty scoring his runs, Patel moved quickly from 10 to 22 but was castled by the same bowler. 117-4.

Stoke still had a couple of problems to solve to secure the win, notably No.5 Green, but nearly all but one of the solutions were supplied in a spell of two halves from Paddy Wilson who took a wicket in his first over, coughed up 16 runs in the next nine balls he sent down, (all of them to Gavin Harper), but then completed his second career 5-for for the Club in the space of 25 balls for the concession of just four runs.

Connell took a good catch over his head for the first, Green was bowled and Harper cut to point where Khara casually did the rest. Edgar-Gibson steered one to Finch at slip to complete his nap hand. Wilson’s wickets sandwiched a third for Will Thomson, (8-1-22-3), off the last ball of his allocation, well held by Dad at mid-off to account for Depree.

As batting conditions moved from the difficult to the virtually impossible, last pair Khan and Hansom batted out the last couple of overs to close 40 runs short on 158 for 9. Wilson led the players off with final figures of 8-2-23-5.

Credit to both sides for playing through some pretty horrible weather to complete the second innings. It was nice to see a bit of away support; notably from Robbie and Francis Parrett, (the former has sent some action shots that will appear later), Fergal O’Neill and Ollie John. Nice chats were also held with Henry Thorpe and Steve Saker, the subject matter mainly about each Club’s prospective final League positions come the 2nd September.

Next week there is a TBA in the fixture card – we always do this to make sure we have enough to play a Bank Holiday fixture – we will source one if there is sufficient availability. Let you know who know if you can play ASAP.