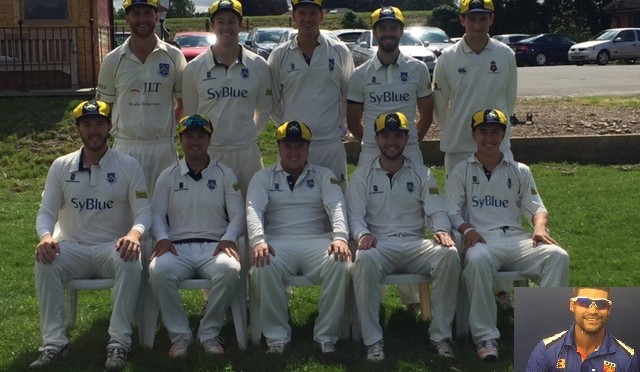 A short day for both League sides; the 1st XI consolidating their position in the promotion places, the 2nd XI doing the necessary and with the three results elsewhere needed to go our way going our way, promotion is back in our own hands again.

The 1st XI completed a win-double over relegation threatened Weybridge Vandals. Whilst the Stoke players were warming up, (minus Toby Tarrant who was taking a tour of Surrey courtesy of Uber), the home side were huddled taking a vote on whether to bat or bowl first on a used pitch; the vote was an indecisive 6:5 and the home skipper chose to bat when James Trower called incorrectly. Such indecision was then reflective in the batting effort.

Stoke, and the recalled Charlie Hill in particular, were out of the traps quickly, reducing the home side to 20 for 4 after just 5.3 overs; Hill running at figures of 2.3-1-7-4 at one point.

Baker drove loosely to mid-off where Ian Hopton did the rest, Neville hit a return catch, (both batsmen made ducks); then Booth, (6), and Buckell, (12 including two edges through slip for four off Tarrant), walked across in-swinging deliveries and were leg-before.

A fifth wicket for Hill never materialised despite a vociferous appeal for a catch at the wicket and a regulation chance going down in the gully; but said grassed chance was the only blemish on an efficient fielding display. Hill’s enforced withdrawal from the attack due to his age, (or lack of it), left him with career best figures of 7-2-18-4.

After an exploratory spell from Shawn Dyson, (who missed the pre-game photo call), that saw home skipper W.Powell come out of his bunker and hook the innings’ only six; spin was introduced at both ends and wickets continued to fall.

Will Frost and Ian Hopton redressed the over rate and ran through a dozen overs between them for a combined effort of 3 for 28, each taking a wicket in their first overs.

Top scorer Foreman, (18), offered no shot to one from Frost that hit him on the boot from around the wicket; then W.Powell edged Hopton to Will Gudgeon at slip. 54 for 6 was soon 55 for 7 when the striking batsman Kirin turned the ball to “45” and called his partner Kulkarni through for a single, only to be run out by a yard courtesy of a direct hit from Tarrant.

An eighth wicket was denied when Hopton, (5-0-17-1), bowled J.Powell off a no-ball, but in the next over the same batsman cut a delivery from Frost, (7-3-11-2), tamely to Kane Fullalove at backward point.

With only 28.1 overs bowled there was a mid-innings break rather than tea; and Stoke made a poor start to the chase.

Gudgeon and James O’Gorman calmed things down, although the former was positive where he could be as the pitch still offered a lot of encouragement to the bowlers. A quick partnership of 43 shifted the momentum.

Gudgeon slapped fives fours to reach 25 off 22; then connected nicely with a slog sweep only to find a fielder on the line who took a good flat catch. 44 for 3.

That would be the home side’s last success, though, as O’Gorman and Dyson knocked off the rest at better than a run-a-ball; a sensible decision made to finish the match with Stoke needing just three runs at the time tea was scheduled. With the scores tied early in the 17th over, O’Gorman lifted one over the in-field for six to move to 39 not out from 50 balls faced. Dyson walked off 18 not out.

Two more wins and Stoke will have achieved their promotion objective; however there is still a chance of the title after a surprise defeat for Churt…although they would have to lose another and Stoke win out. Only one game can be won at a time, though. Next up is a trip to Trinity Midwhitgiftians.

With the opposition only having three men at the ground just before the start, Jase Earl enforced the toss. Initially wickets were hard to come by but once Duncan Elder trapped Janid leg-before, and Adrian Mills, (10-3-26-2), took out top scorer Sarwar for 24 the Agerwal for 4; the rest of the order didn’t last very long.

Dan Gluckman was the most successful bowler, taking 4 for 25 in eight overs; his wickets sandwiched one for Roddy Kelso who bowled Fazan for 16.

Visiting skipper Hafeez went in at No.7, but was left stranded on 5 not out as Nico Spreeth, (2.5-1-4-2), collected the last two wickets courtesy of catches by Elder and Mills. 105 all out.

Similar to the 1st XI chase, Stoke lost two early ones when Andy Berry and Malcolm Dickson were leg-before and bowled for 0 and 4 respectively; but James Corbishley and Spreeth knocked off the rest in an unbroken stand of 94.

Corbishley continued his good form making an unbeaten 54 from 68 balls. Spreeth got good time in the middle in his first match since May, making 36 not out from 56 balls including the winning hit in the 24th over.

The early finish saw regular hits of the refresh button to find out results elsewhere. The last of them came in this morning and EVERY result that needed to go our way did do.

We are back to third in the table with three, (difficult), games to go. Win all three and promotion is guaranteed as one of the remaining opponents is 2nd placed Cheam. Runaway leaders Chessington at The Rec to sort out next Saturday, though.

Nets on Wednesday, everyone!