A tremendous advert for the League saw leaders Churt edge out 2nd placed Stoke with a great fightback.

With weather certain to play a part at some stage James Trower chose to field on winning the toss, and the chess game began with Alex Bond given new nut duties with Toby Tarrant, Shawn Dyson held back to counter the threat of the prolific Mitchell.

The new pairing did a great job; just six scoring shots off the bat came in the first nine overs, although a few too many wides that would come back to haunt the team later on boosted the total. This period saw opener Higgins caught by Robbie Parrett off Tarrant attempting the break the shackles. Tarrant made it 25 for 2 when he found Finneran’s edge and James O’Gorman did the rest at slip.

It was expected that Mitchell would come in at this point, but he was taking some gentleman’s relief at the time so Marshall stepped in at No.4. Marshall was by the far the most fluent of the batsmen, helping the total past 50 and getting the rate above 3 per over for the first time; first change Roddy Kelso appeared to be the bowler targeted but he had his revenge when he yorked opener W.Hucker for 14, these runs taking the best part of 18 overs to accumulate.

Mitchell arrived and was initially watchful as Marshall was going so well. Dan Gluckman kept him in check; and all the bowlers and fielders did a great job meaning Dyson wasn’t required to enter the attack until the 22nd over.

The next few overs of high quality cricket saw Stoke make the batsmen work hard for their runs; but equally Marshall and Mitchell kept the board moving and a partnership of 84 was finally broken when Mitchell, (38), was castled by the returning Bond giving him the charge. In the same over Thomas edged to James Whitmarsh and Stoke had a look at the lower order at 143 for 5.

Ian Hopton was another late introduction to the attack and he initially bowled well without luck, and as can be the case with cricket, deliveries not expecting to take wickets brought their rewards. O’Gorman moved well from mid-wicket to mid-on to catch a skier from Treder, then Marshall, (78 with ten fours and a six), holed out at deep mid-wicket, Parrett showing safe hands once again on the line. 164 for 7.

No.8 Chhabra was a pain to Stoke in the earlier fixture but this time the bowlers and fielders were ready for him, limiting him to singles and a solitary boundary. He lost No.9 G.Hucker to a leg-before decision to given Dyson a deserved scalp, then No.10 Talbot made a curious decision to walk down the pitch to Hopton and was easily stumped by Whitmarsh. The total was nudged up to 182 for 9 by the penultimate ball of the 48th over, whereupon a downpour of biblical proportions had everyone running for the pavilion apart from the well-drilled Churt players who rushed the covers on.

An excellent tea was taken to save time, and the players re-started after a massive drying-up effort. Thirteen balls were scheduled, but arguably the shortest session in history ended after two when a filthy wet-ball full-toss from Hopton was slapped by Chhabra to Gluckman at mid-wicket. Hopton ended with 9.1-1-38-4 to back up great efforts by Bond, (8-1-21-2), Tarrant, (10-1-36-2), and Dyson, (9-1-21-1.)

The playing conditions and calculators were out and the outcome was a revised target of 157 in 37 overs.

Hopton, (26), and Trower, (21), gave the chase the perfect start with an opening stand of 45 in 9.1 overs. Both were dismissed in quick succession by first change Chhabra, and when Whitmarsh was leg-before to Marshall for just a solitary boundary, Stoke needed to re-build at 59 for 3.

O’Gorman and Dyson did a job, advancing the score to 93 by the 21st over; but again Stoke lost two in-batsmen in quick succession when Dyson was bowled pulling a delivery from Marshall for 15; then the same bowler bowled O’Gorman behind his legs for 24 attempting another sweep that had hitherto been a productive source of runs for him. 96 for 5. Marshall 3-23, (final figures of 8-0-30-3.)

Alastair Curran and Parrett had the best part of 15 overs to score the last 61 runs, (the asking rate barely moved from 4 per over for most of the chase); the pair ran well and picked up boundaries where they could, the highlight a nice straight six by Curran off Mitchell.

Mitchell would have his revenge in his final over when he dismissed Curran, (22), in identical circumstances to last year’s match; and the kind of tension that would get Matt Gottschalk jumping around, (guess who appeared to watch moments later!), ramped up when Kelso was bowled by the returning Chhabra. 137 for 7.

Parrett had worked his way to 17 and would have got a few more had some of his elegant drives not gone straight to fielders. Churt flooded the off-side accordingly and with no addition to the score an attempt to work the ball to the leg-side backfired as he dragged a ball from sixth bowler Thomas on to his stumps.

20 runs were needed from 32 balls at this point, so batting the overs was still the way to go. Bond worked the ball into the gaps and Gluckman clubbed a four over mid-wicket to get Stoke within 8 runs of the finishing line; but Bond then holed out in the deep to give Thomas, (5-0-14-2), another.

That was the last ball of the 35th over; but the batsmen had crossed leaving No.11 Tarrant to face. After a delay setting the field, and an aborted run-up by Plaistowe, the next ball was feathered to the keeper and it was all over.

A tremendous match where no-one really deserved to lose; for the second time this year the differential in wides conceded in a narrow defeat is something to be mindful of going into the home stretch; but credit to Churt for grabbing this one by the scruff of the neck when they needed to.

Churt players have been quick to add their praise… 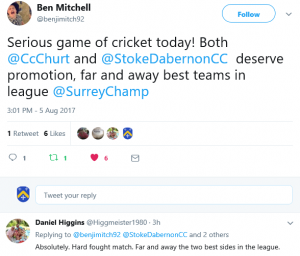