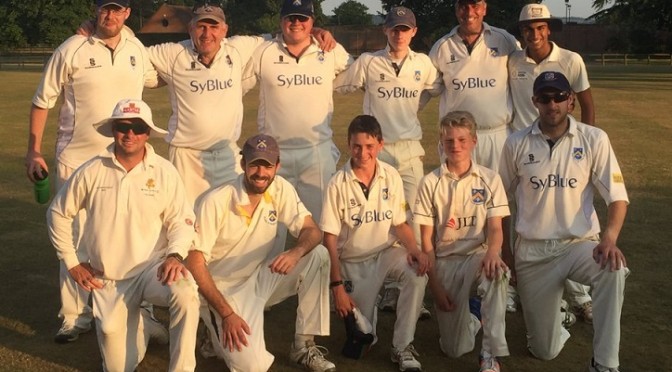 The hottest day of the year saw Stoke and Concorde play out a draw at Sendholme.

Batting first, Doug Gilbertson was originally listed at No.3 but faced the first ball of the match as the person originally selected for the role was sat on the roller at Stoke with less than 20 minutes to the start. After a quiet opening maiden, it was anything but at the start of the second over as debutant Ishan Mulchandani drilled the first two balls he faced through the covers and mid-off, then pulled the third along the ground through mid-wicket – not a bad way to start your Stoke career – and he hit another four before the over was out.

These would be Mulchandani’s only scoring shots, though, as the next over saw him clip to square leg where Paddy Wilson, fielding whilst the last Concorde player was changing, took a good catch.

Gilbertson and Thomas Dennis, in at No.3 having been listed at No.4, batted with little alarm until the first drinks break, (62 for 1 off 18); then they ran harder on the resumption as the fielders were starting to feel the heat. Gilbertson’s departure with the score on 77 owed to freakish events. He swung himself off his feet trying to attack the change bowling, one of his feet caught in the turf and he ended up in a heap. In the next over an attempt to run proved futile and he retired, (for the second time this season), on 33.

Ian Hopton made it in time to take the No.4 spot and played positively against the tiring change bowlers. He ran well with Dennis and pair took the second wicket stand to 163 – 103 of them in partnership together in just over 14 overs – before Hopton hit a return catch to Turvill for an even 50 from 41 balls with seven fours.

One wicket brought a second the very next ball Robbie Parrett caressed it past the cover fielder, but both batsmen turned for an improbable second run and Dennis was run out by yards for 69 from 105 balls faced. This was Dennis’ maiden half-century for Stoke and he hit nine fours.

Parrett Snr, (well, playing Snr – Mum & Dad were at the ground to watch his first appearance for the Club since July 2007), had an eventful seven ball knock that ended when he was leg-before for 8. One nice four reminded him, and the audience that include Malcolm Dickson, of his considerable ability, and we hope to see him in League action very soon.

Skipper Rod Thomson kept the board moving and the total passed 200 for the loss of just four wickets. Thomson, (13 off 10), fell to smart slip catch by Fernandes leaving Jeremy Connell to take centre stage and set up the declaration. He did so with a 17 ball knock of 27 not out that included the match’s only six.

Thomson waved the batsmen in after 43 overs. Stoke had 236 on the board to be creative with.

An excellent traditional cricket tea set Stoke up for their session the field that would ultimately last 40 overs including the mandatory last 20.

The hosts went after the bowling from the start as 38 runs, (nine fours), came from the first 5.2 overs; but both openers were back in the pavilion by the mid-point of the 7th over; Jack Townsend castled Fernandes for 20, then a low full-toss from Richie Parrett was well held at cover by Hopton. 42 for 2.

Change bowlers Dennis and Ben Townsend bowled good spells; Townsend Jnr taking two wickets in his third over to reduce the hosts to 78 for 4. Mulchandani took a good high catch over his head out of the sun, then Prevost heard the death rattle third ball.

No.4 Marshall and No.6 Symondson continued to play positively as Stoke kept the game open. With the total on 134, Thomson found Marshall’s edge and he was well held by Wilson at slip for 38; but the home players continued to play their shots. Wilson was punished for anything off target, but did get the next two wickets when Symondson, (33), fell to a sensational catch by Thomson in the deep, then the home skipper Wright was bowled for a duck. 142 for 6 with 13.1 overs to go – could Stoke get it done?

No.7 Freeman was proving an obstacle, hitting the ball in unusual areas. Hopton tied him down and on another day might have picked up an lbw decision or two; but he did get the next wicket to fall when No.9 Anning served him up a return catch. 157 for 8 with 8.5 overs to go.

Thomson shuffled the bowlers trying to find a solution. All did well but the last two wickets were proviong elusive. Just as things were starting to peter out, Jack Townsend, (7-3-28-2), opened the door again by shattering No.10 Howard’s stumps with ten balls to go. No.11 Stockbridge saw off the remainder of that penultimate over; then Freeman, (23 not out), was made to play every ball by Dennis in the last set, but he held on and stumps were drawn with the home side on 179 for 9.

Concorde were excellent hosts, contributed a lot to this match and were good for their draw; but full credit to Stoke for nearly forcing a win on a very good pitch that offered little seam movement or turn.

Stoke’s Sunday XI are back at The Rec next week when they host the Surrey Cryptics. 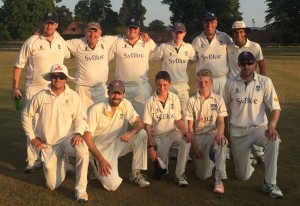