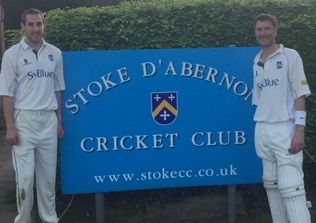 Stoke’s Sunday XI completed a clean sweep of senior cricket victories at the weekend with a successful run chase at The Rec. Lots of familiar faces in the visitors’ line-up when they arrived, but they advertised themselves as “stronger than usual” and hustled Rod Thomson into giving them first use of the strip.

Early on it was looking like the respective interpretations of “stronger” were very different and a very turgid opening hour saw Moumer Khara, (5-1-5-1 – inc four wides), and Alistair McMillan, (5-1-10-0), bowl tidily on a fair but unresponsive pitch; Khara snicking off Prakash to give Will Yeeles his first dismissal of the season behind the timbers.

Thomas Dennis carried on the good work and the scoreboard only really moved when a rusty Jeremy Connell pulled the odd delivery down. Dennis eventually struck next when No.3 McIntosh, (31), skied to Connell at mid on, but in all honesty it was a very unatmospheric session.

Stoke took one more wicket before drinks courtesy of a direct hit run out by McMillan, a throw from the deep having backed up Connell’s valiant attempt to take a diving catch by the sightscreen. The unlucky batsman was Tim Richards who was sent back by opener Alex Fletcher, (former Stoke colt.)

After drinks Rod Thomson and Ralph Coleman continued to strangle the scoring. Coleman finally got something for his weekend’s work when Fletcher, (37), hit to Khara at cover; but with the total still in the 90s with less than ten overs to go, a bit of game management was required, particularly when No.6 Sunil was bowled by the returning Dennis, (7-1-17-2), for probably the most village duck you will see all season.

To lend a helping hand the Finch brothers and Peter Phipps shared eight overs at a combined personal cost of 41. Finch Snr castled Jerry for 26, (he was also dropped on 0), shortly before the innings closed on 139 for 6.

After another bumper Jo Patrick tea, Stoke made an horrific start to the chase. Chris Finch, Dennis and Rick Mustill were all castled by Oscar Richards, (initial spell of 6-4-4-3), and with Domingo keeping things tight at the other end Stoke were 4 for 3 off 8 overs…yes eight. The score was doubled by the mid-point of the 11th over, but Stephen Finch fell to a sharp slip catch by Reed off Domingo and the Stokers were all rushing off for their pads.

Thankfully the change bowlers were not as good as the openers; so Phipps and Connell set out on a decisive partnership. Cashing in on the bad ball and running well, they got Stoke up to 55 for 4 by the drinks interval, then they took their stand on to 104 by the end of the 31st over.

Connell hit three fours in successive balls to go past fifty – he also hit a nice six – and Phipps pushed the field in his 85-ball knock.

Just as Stoke looked to be cruising, though, seventh bowler McIntosh changed everything. In his first over Connell, (63 from 70 balls, 8×4, 1×6), hit to Domingo at mid-on looking to go over the top; the batsmen crossed and two balls later Phipps, (47 from 85 with 3 fours), edged to Fletcher who held on behind the stumps. By the end of the over Stoke were 120 for 6 and the next was a maiden too.

Thankfully Stoke had some experience and depth to their order. McMillan rotated the strike, (although Khara did run one short), and each hit a boundary to take Stoke to the brink of victory. With the scores level Khara was stumped giving it the charge looking for the winning hit off the last ball of the 36th over.

Next ball McMillan, (11 not out), tuned one around the corner for a single leaving Yeeles not out 0 having not faced a ball much to the disappointment of his army of fans, (Trower, Corbishley, Dolman and others), who came to cheer him on.

A great day, well managed by Thomson, ended with a healthy contribution to the bar from the players and supporters of both sides. Roll on next weekend…

Next Sunday we have a Surrey Trust League fixture away to Ashtead that will place a strain on resources. If we have numbers for an additional Sunday fixture we will source one. Availabilities, please. 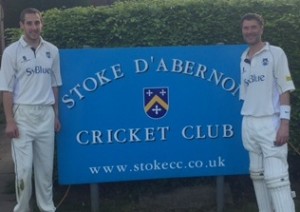 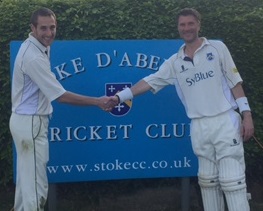