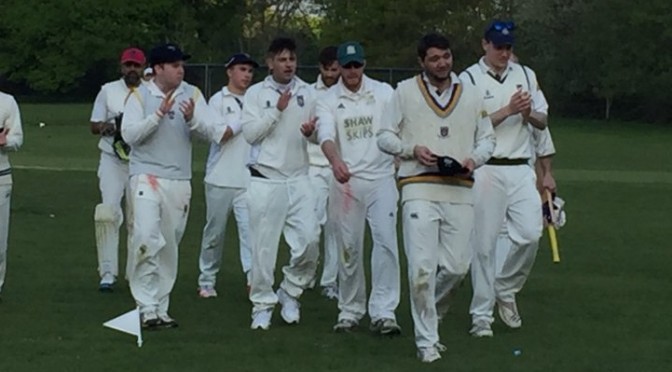 Stoke successfully defended a moderate total to record their first victory of the season.

Batting first having won the toss, there was an early wicket when Alistair McMillan edged B.Grindell to the keeper; but Jack Raimondo and James Trower added 57 runs in 8.3 overs to get the board moving. They were separated when Raimondo, (23 from 26), was caught & bowled by first change Williams attempting to turn a low full toss into the mid-wicket area.

With just seven added to the total Kane Fullalove missed a straight one from the same bowler, and Stoke were precariously placed on 74 for 4 when Dan Gluckman was leg-before for 4.

Debutant Zaraq Nazir joined the captain and the pair steadied things with a patient partnership of 30. Trower had looked good for his 42, (7×4, 52 balls), but then holed out in the deep off fifth bowler Rowlands with the total on 104.

Nazir accumulated runs steadily, twice coming out of his bunker with a six at each end, and despite losing Will Frost for 6, (bowled by the returning Isted), he helped to build a total. He was eventually out for 39, (51 balls, 3×4, 2×6), when he skied to the returning Williams, (134 for 7); and Williams completed a maiden five-for when Deepak Malhotra, (13), couldn’t clear the fielder on the circle.

It was 148 for 8 at this point, and there was no wagging tail as four runs later Stoke were all out when Alex Bond was caught & bowled for 4, then Charlie Hill was leg-before; both wickets to B.Grindell who finished with 7-0-36-3.

After an excellent tea provided by Sarah and Andrew Trower, Stoke took the field needing to keep things tight early. Charlie Hill and Duncan Elder did just that, conceding just 21 runs in the first eight overs they shared, Elder picked up the wicket of Reynard when he held on to a return catch.

Khan and Bishop got the chase on track with a stand of 37; but were separated in the 14th over when Khan was bowled by Frost for 23.

Frost showed ever-increasing good rhythm, and struck a double blow in his fourth over when Johnston skied to Gluckman; then two balls later Bishop, (17), hit one up in the air to give him a return catch, the fourth “c&b” of the match. 49 for 4.

Frost’s wickets owed much to pressure created by Bond at the other end who conceded just nine runs in a four over burst up to the drinks break; and the next bowlers used carried on the good work.

Having taken 7 for 22 against the same opposition last August, Gluckman took just four balls to get into the fourth column again when T.Grindell steered one to slip where Fullalove showed good hands. Nazir took his first wicket for the Club when he castled Williams for 4; and Stoke were in the pound seats when Rowlands charged at Gluckman and was stumped by Malhotra. 73 for 7.

Gluckman would finish with figures on 6-1-16-2. Nazir bowled with a lot of heart and impressed his new team-mates.

However a partnership was starting to build between B.Grindell and visiting captain Henry, the latter surprisingly batting himself at No.9 having made runs at No.4 in last year’s match.

The eighth wicket stand reached 22 when B.Grindell was bowled by Frost, his first delivery after being reintroduced into the attack. Hill was also back with ball in hand and took a deserved wicket when Isted was bowled, (pictured below), looking to accelerate the scoring as the asking rate moved towards a run-a-ball.

Despite being 96 for 9 Battersea Ironsides refused to give up the fight and Henry hit three fours and a towering six to move into the 30s. After Hill, (8-1-36-1), completed his allocation, Nazir was brought back and he closed the innings on 116 when he bowled Henry for 32 to finish with 6.2-0-20-2 and complete a 36-run win. A good afternoon’s work for him and the team overall.

The players then made a nice contribution to the bar takings as the televised football reached its conclusion to complete a successful and highly sociable day.

So Stoke are off and running. Next week the test gets a little stiffer with a trip to Old Rutlishians. The Clubs also meet at 2nd XI level at the Rec.

Scorecard : http://sdacc.play-cricket.com/website/results/3078767
More photos from the game can be found on our Twitter Page : @StokeDabernonCC https://twitter.com/StokeDabernonCC